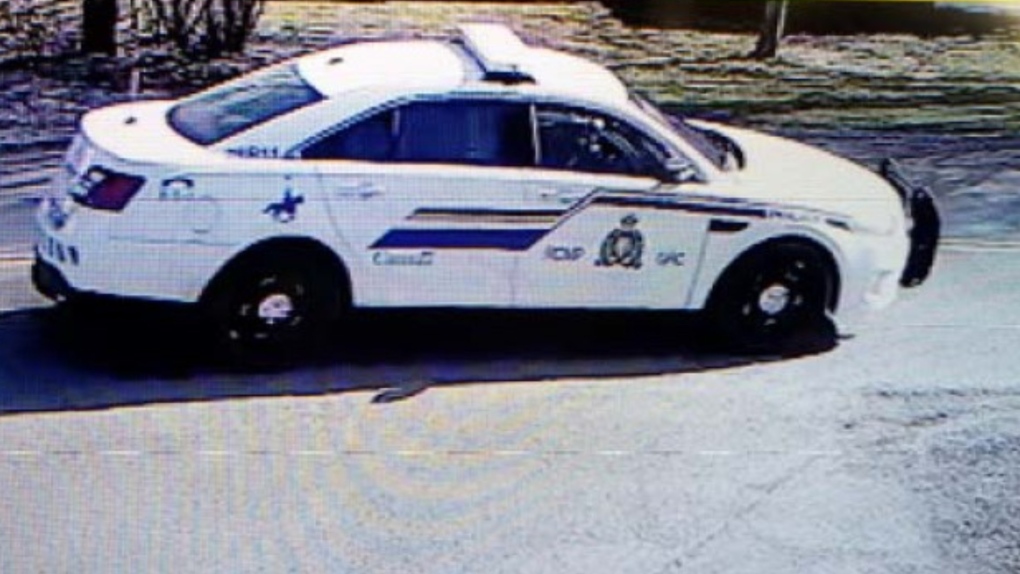 This photo showing a replica RCMP vehicle being driven by the gunman in Debert, N.S., was released as the Nova Scotia RCMP provided an update on Tuesday, April 28, 2020 into their investigation into the killing of 22 people. (THE CANADIAN PRESS/HO-Nova Scotia RCMP)

HALIFAX -- The husband of a woman killed in the Nova Scotia mass shooting is criticizing the continued online sale of retired police vehicles that are still equipped with official gear.

Nick Beaton, whose pregnant wife Kristen was killed by a gunman during the April 18-19 rampage, said today it's discouraging to find police cars with antennae and some rear bumper reflectors advertised on Nova Scotia online marketplaces.

The gunman who killed 22 people acquired four former police vehicles at auction, then used one of them -- a Ford Taurus with RCMP decals -- during his attacks across five communities.

Beaton points to a private Facebook group advertising the sale of a 2013 Ford Taurus retired police vehicle equipped with antennae, rear bumper stickers and a push bar, as well as another ad for a similar vehicle on Nova Scotia Kijiji.

Opposition Leader Tim Houston said in a news release today sales of retired police vehicles should be regulated to ensure the cars are decommissioned with no insignia, accessories or equipment that could reasonably confuse people.

Houston says he will introduce legislation to make those changes as soon as the legislature resumes.

Beaton says he's hoping legal restrictions will require that official police equipment be removed from vehicles prior to them being put on the market.

"It shouldn't just be anyone (who) can sell them," he said in an interview. "And if they do allow private sales, make it the law that everything has to be removed from the vehicles."

Nova Scotia and the federal government are holding a joint public inquiry into April's mass shooting. Authorities said that among the issues they want to explore are the "public policies on the disposal of police vehicles and associated equipment."

The gunman had carefully applied decals and added flashing lights to one of his replica vehicles, which helped him escape the rural community of Portapique on April 18 after taking the lives of his first 13 victims.

While sales of police cars are permitted, it is explicitly illegal under the Criminal Code for anyone to use them to impersonate a police officer.

Provincial legislation, however, doesn't explicitly prohibit ordinary citizens from owning items such as the distinctive light bars of police vehicles, with their flashing red lights.

Nova Scotia's Motor Vehicle Act, for example, prohibits people from driving a vehicle on a highway with the flashing lights -- but doesn't explicitly prohibit owning the light bars.

Police unions and associations have said it's time to tighten up those rules in light of the potential dangers the Nova Scotia gunman's actions demonstrated.

This report by The Canadian Press was first published Aug. 6, 2020.