In footsteps of the dead: Remembering the Halifax Explosion through its stories

HALIFAX -- For Mary Elizabeth Luka, one of the best ways to comprehend the enormity of the 1917 Halifax Explosion is by tracing the footsteps of the dead.

Luka is a member of the Narratives in Space and Time Society, a group of artists who organize public walks every Dec. 6, offering stories, songs and performances that bring to life the raw and terrifying impact of the worst man-made disaster in Canadian history.

"Because we're literally walking in people's footsteps, we end up in places you wouldn't otherwise go," Luka said in an interview. "In every walk, there's probably six or seven places where we stop and something happens."

On Tuesday, the 99th anniversary of the explosion, Luka's group gathered with about 40 people on the Dartmouth side of Halifax Harbour, where the Mi'kmaq village of Turtle Grove was obliterated when a Belgian relief ship and a French vessel carrying munitions and TNT collided a few hundred metres away.

The resulting blast and tidal wave killed almost 2,000 people in the Halifax area. Another 9,000 were injured, many of them blinded by flying glass or burned in the fires that razed a large section of the city's north end.

To this day, a tree-lined section of what was once Turtle Grove remains empty and overgrown. And that's where Luka's group walked to hear Mi'kmaq filmmaker Catherine Martin speak about a family member who died that terrible day. As people stood in a circle near the shoreline, Martin drummed, sang and invited everyone to make offerings for remembrance.

At one point, the names of several of the people who had died that day were read aloud, and some of those in the circle offered their own stories or sang.

As usual, the city's main commemoration ceremony was held directly across the harbour at Fort Needham Memorial Park, which overlooks the former neighbourhood of Richmond -- an area virtually flattened by the explosion. There were speeches from politicians. Prayers were read aloud. Ships in the harbour blew their horns. And a cannon was fired from the ramparts of Halifax Citadel National Historic Site.

Mary MacLeod, a lifelong resident of Halifax, recalled how her great uncle, letter carrier Thomas Spruce, was killed while he was making his daily rounds in the Vestry Street area.

"They say he was decapitated," said MacLeod, a petite woman bundled against the cold. "They identified his body by the numbers on the laundry pins he used to hold his socks up."

In his remarks to a crowd of about 300, Mayor Mike Savage alluded to the inevitable challenges that come with trying to pay tribute to something that happened so long ago.

"We've seen the books, we've read the accounts and perhaps we've seen the movies," he said. "But can we really imagine what it was like 99 years ago?"

He then recited some of the numbers and facts most Haligonians know too well.

With 11,000 people killed or injured, that amounted to about 20 per cent of the city's population. The blast was the biggest the world would see until the advent of the atomic bomb. Windows were shattered in homes 100 kilometres away in Truro, N.S., and the ground shook in P.E.I.

The next day, the headline in the Halifax Herald read: "Halifax Wrecked."

The mayor said the city is already planning for the 100th anniversary, saying public surveys have given the city a clear picture of how residents feel about the grim event.

"They've used words like fear, devastation and destruction, but they also spoke of community of courage and of hope," he said. "Residents told us that we have to solemnly honour our past, remembering those who have lost their lives and the families that were forever changed."

Like the mayor, Luka is looking forward to the day when her group's project, "Public Geographies of the Halifax Explosion," culminates with a final walk next December.

As with the previous walks, this one will feature so-called interventions aimed at reaching people in a way that old books, photos and films will never be able to do.

During the first walk in 2014, for example, participants walked to an area of the North End where a women dressed in period costume read a first-person account about Elizabeth Fraser, a young girl who was working as a maid in the city's south end when the explosion destroyed her family's home on Roome Street.

As the woman read the harrowing story, which tells of Fraser's frantic search for her missing brother amid the city's smouldering ruins, listeners were given scarves, which they were encouraged to wrap around their heads -- to simulate total blindness and focus their attention "so they could place themselves into that space," Luka said.

On another walk, participants were taken to the Conservatory of Music on Chebucto Road, which was used as a morgue after the explosion.

"It's changed very little since that period," said Luka, adding that the theme of that walk was "aftermath."

In a dimly lit basement, a slide show featured historic photos from the Nova Scotia Archives, and singer Janice Jackson complemented a jarring piano composition from the era with operatic punctuations.

Next year's events include exhibitions at the Dalhousie Art Gallery and the Nova Scotia Archives. One of the exhibitions will include material gathered during the previous three years. 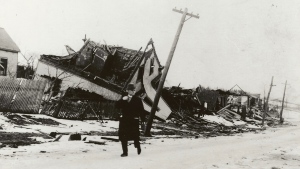