Incredible journey: A lost German shepherd goes from New Brunswick to Maine -- and back 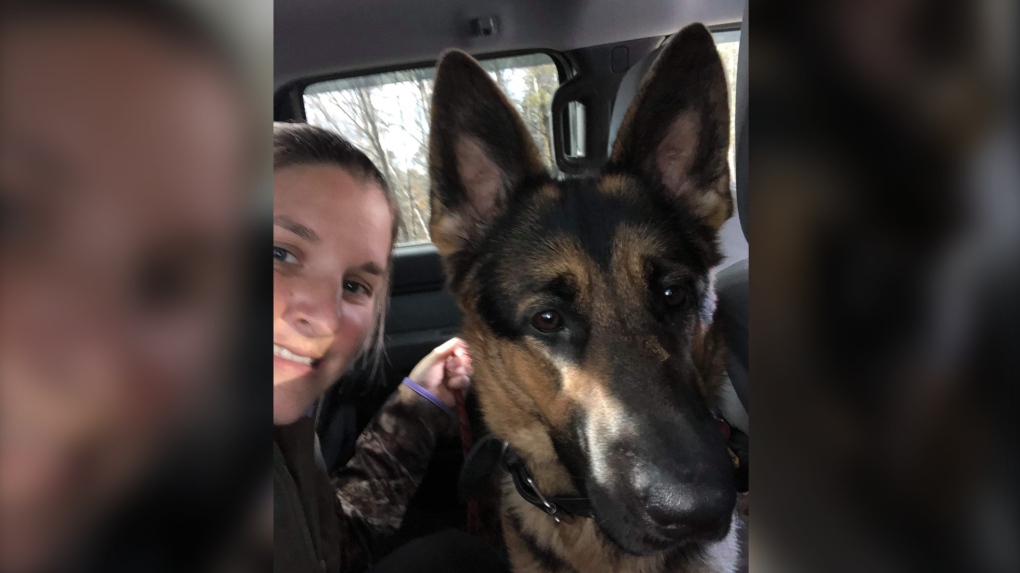 Family friend Annik Sirois snapped this photo when she went to get Diamond at the border. (COURTESY ANNIK SIROIS)

CLAIR, N.B. -- A lost dog's journey across the U.S.-Canada border was complicated by COVID-19 restrictions limiting movement between a New Brunswick town and a Maine town separated by the St. John River.

The Bangor Daily News reports that Diamond, a German shepherd, escaped from her home in New Brunswick on Saturday and crossed a border bridge into Fort Kent, Maine, where coronavirus restrictions prevented her caretakers from following.

The owner, Paryse Michaud, was at her daughter's hockey tournament several hours away when she got the news that the 17-month-old dog had escaped from their home in Clair, N.B. The newspaper reports that Michaud's father was looking after the dog when it escaped.

Michaud posted a plea for help on Facebook, saying the dog had crossed the border.

Over the next six hours, Michaud received updates from people in Maine tracking the dog, the newspaper reported. A friend found Diamond in a garage and co-ordinated with other friends on the Canadian side for a handoff.

Finally, Michaud got a text with a photo of the dog and family friend Annik Sirois in a car on the Canadian side of the border.

Diamond was united with Michaud and her family on Sunday after being handed off at a border station, the newspaper reported.

"I can never thank the people of Fort Kent enough," Michaud told CTV Atlantic on Tuesday.