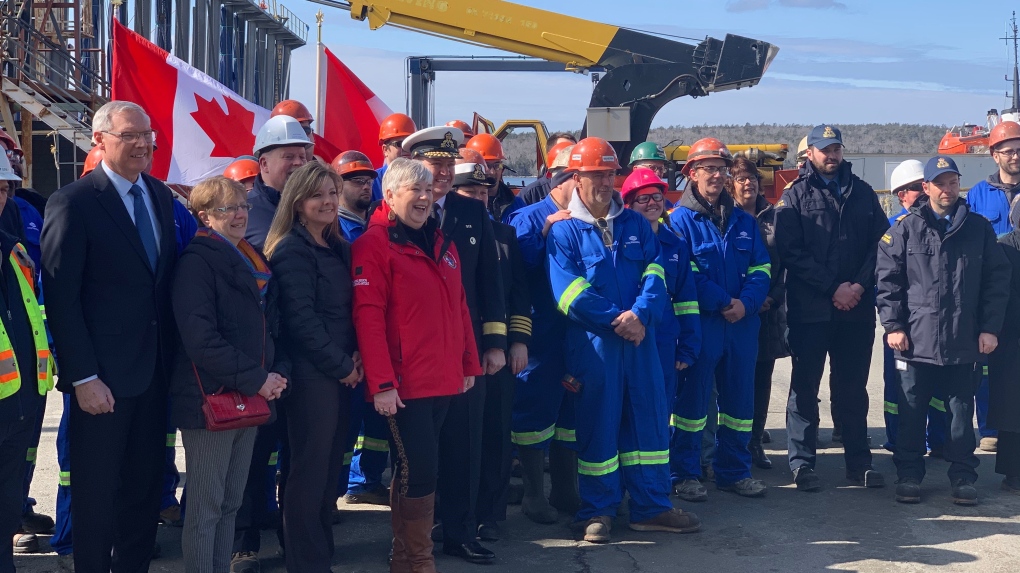 HALIFAX -- A prominent Indigenous historian says it's the ideal time to drop the name Edward Cornwallis from a coast guard ship, as the federal agency announced plans on Monday to spend $12.1 million renovating the vessel.

Daniel Paul, a Mi'kmaw elder and the author of "We Were Not the Savages," said in an interview the refurbishment should include a name change, as has occurred at a Halifax junior high school and a historic African Nova Scotian Baptist church.

The colonial governor's statue has been removed from the city as an act of reconciliation with Indigenous communities over a proclamation Cornwallis made that offered a bounty to anyone who killed a Mi'kmaw person.

However, federal Fisheries Minister Bernadette Jordan said in an interview the ship will "for now" remain named after Cornwallis, who founded the City of Halifax in 1749.

Jordan was in a community on the province's south shore to announce the federal Liberals's support of 55 jobs at the Irving-owned Shelburne Ship Repair in a project expected to begin this spring and last until January 2021.

Jordan said to date her office hasn't received formal renaming requests, but added if Indigenous communities bring the matter forward "it is something we would have discussions around."

"We've been a government that's been committed to reconciliation and that we listen to First Nations communities with regards to these things. So these are absolutely conversations we're willing to have," said Jordan.

"But for now we haven't had a great deal of feedback on that. So right now it stays the Edward Cornwallis."

Paul, 81, said he had made his views known frequently in the past.

"It's a priority to have that ship renamed. It's an insult to the Mi'kmaq people," he said.

The historian, writer and former federal government worker said he had been told by officials in prior governments that the ship would be scrapped and this would end the continuation of its name.

"It's an ideal time if they're going to do major repairs and a refit to rename it ... They could give it a Mi'kmaq name if they feel like it. There are plenty of Mi'kmaq heroes they could look at," he said.

Jaime Battiste, the Liberal MP for Sydney-Victoria, said in an interview Paul's views should be taken seriously.

Canada's first elected Mi'kmaw member of Parliament said in an interview the potential renaming is a "challenge and an opportunity."

"Daniel Paul is correct in saying now would be the time, if we're going to be planning on making major changes to a vessel that has the name Cornwallis, when everyone in Halifax is looking to see if that's the name we want to promote out there," he said.

"It's something we need to discuss."

Jack Granatstein, a Canadian historian and professor emeritus at York University, has in the past cautioned against renaming of historic sites, arguing they should be displayed with contextual information to help people understand, interpret and learn from the past.

However in this instance, Granatstein said the key thing is to get the work done on the aging ship as the country awaits the construction of a fresh generation of icebreakers and research vessels.

"The important thing is to get this 34-year-old icebreaker refurbished. I'd hope the name wasn't changed, but resistance to a name change in the current national mood is probably futile and might delay the work needed," he wrote in an email.

Jordan said her government is building 18 new large ships and six icebreakers, but in the meantime there's a need to keep the existing vessels in service.

A coast guard news release says the repairs include the replacement of main engines, a new heavy-lift crane, a new bow thruster and hull coating.

The vessel will also undergo regulatory work such as inspecting the tail shafts, seals, stern tubes, propellers and rudder.

The 34-year-old icebreaker was launched in 1986 after being built by Marine Industries in Tracy, Que.

Under the national shipbuilding strategy, more than $7.5 billion in contracts have been awarded under the repair, refit and maintenance program.

This report by The Canadian Press was first published March 2, 2020.