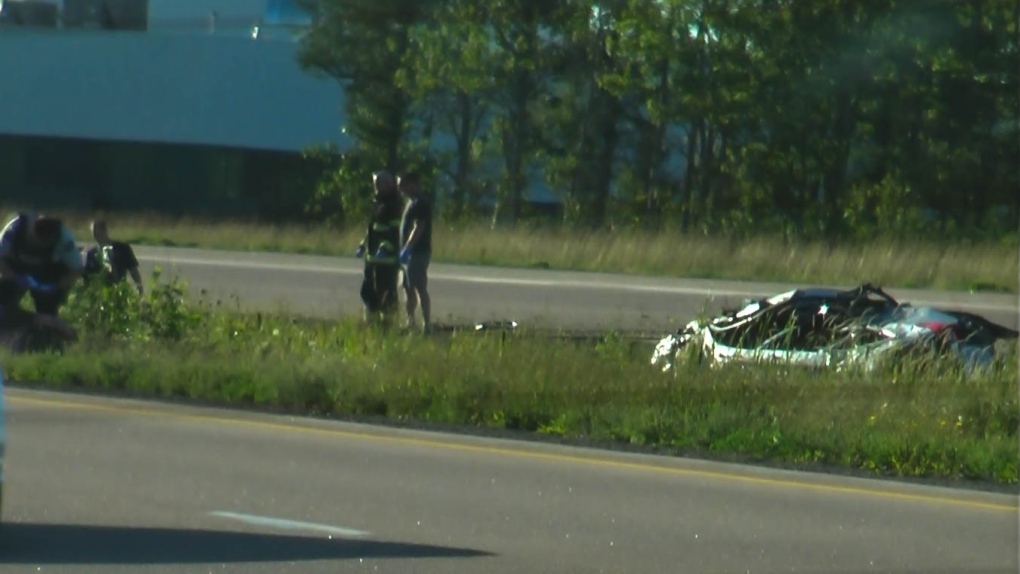 Three men died when a vehicle crashed near Moncton on Sept. 1, 2019. The men were all foreign students at the Saint John campus of the New Brunswick Community College. (Wade Perry)

FREDERICTON -- Members of the Indo-Canadian community in New Brunswick are preparing a Hindu prayer service for three young Indian students who died in a horrific highway crash near Moncton on Sunday.

Manisha Varma, the president of the Association of Indo-Canadians in Fredericton, said the young men were on a short excursion to visit Moncton and then Parlee Beach in Shediac when the car they were in rolled over and crashed.

Police have said speed may have been a factor, and the 28-year-old driver -- who is also originally from India -- has received a summons to appear in court on Dec. 13 and may face charges pending an investigation.

The two 24-year-old men and the 29-year-old man who died were all classmates in the New Brunswick Community College engineering diploma program in Saint John and had come to Canada recently to pursue their studies.

Varma -- who drove the surviving passenger and the driver back to their homes in Saint John -- says the 25-year-old passenger is also a community college classmate of the deceased and is "traumatized" by the tragic loss of his friends.

Varma says it's expected the bodies of the men will be returned to India for Hindu burial ceremonies, while the community in New Brunswick will prepare a time of prayer for the evening of Sept. 15 at the Hindu temple in Fredericton.

She says among the tragic aspects of the crash is that one of the young men who died had been planning a return to India, having recently learned his wife is pregnant.

"It is a really a terrible story," Varma said Wednesday.

"I've been in Canada for 13 or 14 years and I've never seen an incident like this .... They were so young. They just came last year, and you can imagine how their parents in India feel about this."

She says the names of the men haven't been released at the request of the families.

Varma said the driver, also a member of the Indo-Canadian community, has lived in New Brunswick for a number of years and had volunteered to take the young men for an excursion.

-- By Michael Tutton in Halifax