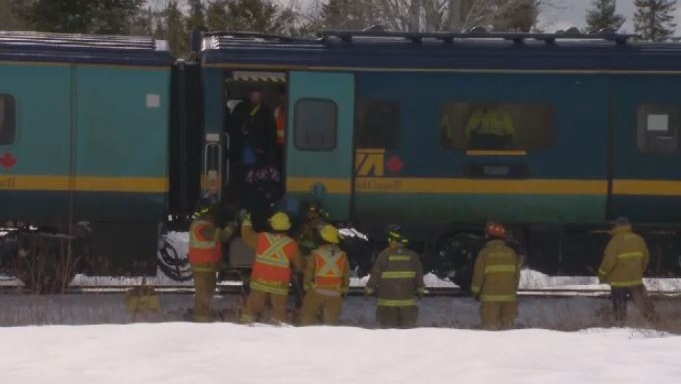 No one was injured when two cars of a Via Rail passenger train derailed outside Moncton on April 4, 2019.

HALIFAX -- On April 14, 2019 at approximately 12:35 p.m., two last cars of a VIA Rail passenger train headed to Halifax from Montreal left the tracks near Coal Branch, N.B., roughly 46 kilometres northwest of Moncton.

Three passengers were treated for minor injuries. The remaining 91 passengers and 15 crew members were not injured.

On Wednesday, the Transportation Safety Board of Canada (TSB) released its investigation report, which concluded that the train derailed due to a broken rail at the Lakeville Road crossing, which had “thinned due to corrosion to a point where it could no longer support normal train forces and it progressively fractured under the train”.

The report concludes that the environmental conditions and the effects of winter road salt caused the rail to corrode at an accelerated rate, and it was not identified because the rail was hidden by the crossing surface.

The board adds that it is concerned by the lack of requirements to assess rail corrosion at railway crossings.

The VIA Rail passenger train that runs from Montreal to Halifax, known as the 'Ocean service' has been suspended until at least Nov. 1 as a result of the COVID-19 pandemic.