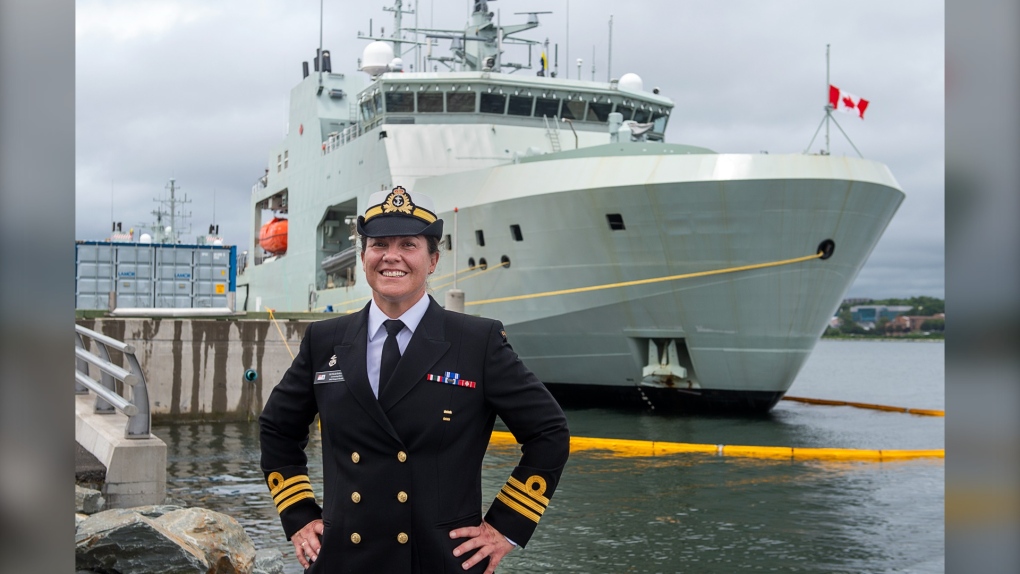 Cmdr. Nicole Robichaud, commanding officer of the future HMCS Margaret Brooke, stands near the bow before a ceremony as the second Arctic and Offshore Patrol Ship (AOPS) is delivered to the Royal Canadian Navy from Irving Shipbuilding in Halifax on Thursday, July 15, 2021. The vessel is named in honour of the Royal Canadian Navy Nursing Sister Lieutenant-Commander Margaret, Martha Brooke, who was decorated for gallantry during the Second World War. (THE CANADIAN PRESS/Andrew Vaughan)

HALIFAX -- Irving Shipbuilding officially delivered the second in its series of Royal Canadian Navy Arctic patrol ships today at a ceremony in Halifax.

The Arctic Offshore and Patrol Ship will be officially designated HMCS Margaret Brooke during a naming ceremony later this year.

Brooke, a nursing sister in the Royal Canadian Navy, was decorated for gallantry during the Second World War for her actions when the SS Caribou was torpedoed by a German submarine in the Cabot Strait.

The ships were built to operate in up to 120 centimetres of first-year sea ice. Construction of the following three ships in the series is ongoing, with construction of the sixth ship expected to begin in 2022.

The first ship, HMCS Harry DeWolf, was delivered to the Defence Department on July 30, 2020, and was officially commissioned into service on June 26.

A Defence Department news release says work is ongoing to complete the Nanisivik naval facility, which will support operations of the new Arctic vessels and other government maritime ships, and it is expected to be operational next summer.

This report by The Canadian Press was first published July 15, 2021.