"I'm pretty angry, right now," she said, speaking from her constituency office in Amherst, N.S. "The people in our community should have been informed immediately."

Smith-McCrossin expressed her frustration after she, and many others in the community, only learned though social media posts and word of mouth that the vehicle driven by the suspect in a shooting Tuesday afternoon in Riverview, N.B., was found in downtown Amherst -- and the suspect was still at large.

Her constituency office is one block from where the suspect was eventually arrested without incident.

The Amherst Police Department sent out a tweet at 10 a.m. that officers had located the abandoned vehicle. That discovery, according to officials, was made just after 8 a.m..

While the tweet stated, "There is no indication that there is an immediate threat at this time," Smith-McCrossin says Nova Scotia's public alert system should have been activated much sooner than it was.

The Riverview shooting suspect, 24-year-old Janson Bryan Baker, had already been described by New Brunswick RCMP as "carrying firearms with an intent to use them."

He led police on a 19-hour manhunt into Nova Scotia until he was arrested in Amherst. 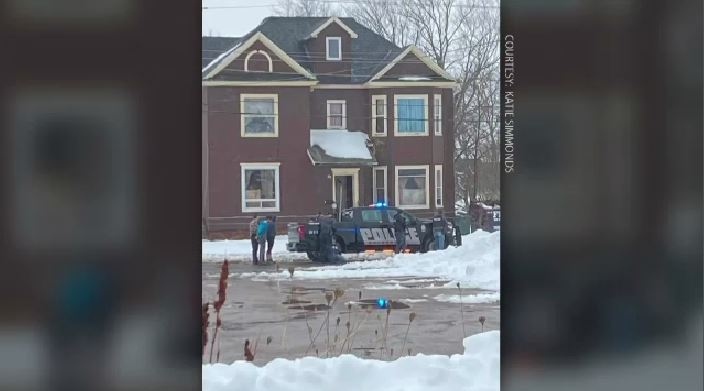 New Brunswick RCMP issued a warning on its provincial Alert Ready system late Tuesday night, six hours after a shooting incident outside a Riverview school sent a teacher to hospital with non-life-threatening injuries.

The force then posted another tweet roughly an hour later, stating it had contacted Nova Scotia's Emergency Management Office (EMO) to request an alert be sent.

"Three and a half hours later an emergency alert is sent out," said Smith-McCrossin. "It's completely unacceptable."

Nova Scotia Justice Minister Mark Furey told CTV News that EMO received an initial phone call from the Nova Scotia RCMP at 10:54 a.m. The office then received the force's approved text for the alert, at 11:35 a.m.

He said the alert went out seven minutes later.

Furey said once activated, Nova Scotia's Alert Ready system is quick to issue the public warning, which appears on cellphones, radios, and televisions.

But Furey admitted, the time between the incident of concern and the request to activate the system should be shorter.

"There is a time frame there that has to be addressed," Furey said. "I only hope that through continued dialogue that we will see that time frame compressed."

Furey said the issue will be discussed at a previously-scheduled meeting Thursday of the province's public alert committee, which has been examining the alert system since it first came under scrutiny after the massacre last April in Colchester County.

In Nova Scotia, RCMP must contact the provincial EMO to activate the alert system.

That process was heavily criticized after 22 Nova Scotians -- including an RCMP officer and a woman who was pregnant -- were killed during a murderous 13-hour rampage that began in Portapique, during which tweets were sent by authorities, but no provincial alert was ever issued.

The councillor for the county is among those who said Wednesday's alert should have come much sooner.

Tom Taggart said his area isn't far from Amherst, and he heard helicopters flying over his house in Bass River and didn't know what was happening. He only became aware of the situation after talking with others in the community.

He said receiving a warning of potential dangers as soon as possible is key to keeping people safe.

"I just don't understand the reluctance from the RCMP," he said. "I just thought they would have learned their lesson."

Privacy lawyer David Fraser is among a number of legal experts who have called for an examination of the alert system, the use of social media to warn citizens, and any alternatives.

"Not everybody is on Twitter," said Fraser. "And so when it comes to information about a danger or a risk to the public, what's the best way to get that message out?"

"Obviously, a lot of people are saying the Alert Ready system should be used and used more promptly."

But he says that also presents another set of issues.

"Maybe we should zoom out and think of it in another sense, not everybody has a mobile phone," he said. "And so are there better ways of communicating when it comes to things relating to risk to the public?"

In New Brunswick, an emergency alert was issued in Moncton Tuesday night --- six hours after the shooting occurred. In that province, the RCMP issues alerts directly to the public, and said it did so as soon as it had credible information of a potential threat.

"It was at that point that we pivoted the investigation," said New Brunswick RCMP media spokesperson Const. Hans Ouellette. "We needed to find him, we asked for the public's help, and that was when the alert ready was sent out."

Ouellette said it was the first time the force had sent out an alert directly to the public during a critical incident since it has had that capability, something that was worked out with the province.

An inquiry to RCMP headquarters in Ottawa for clarification on guidelines around the use of alerts was acknowledged, but officials said they could not provide that information by deadline.