'It's time for us to heal:' Fredericton begins to move forward after shooting 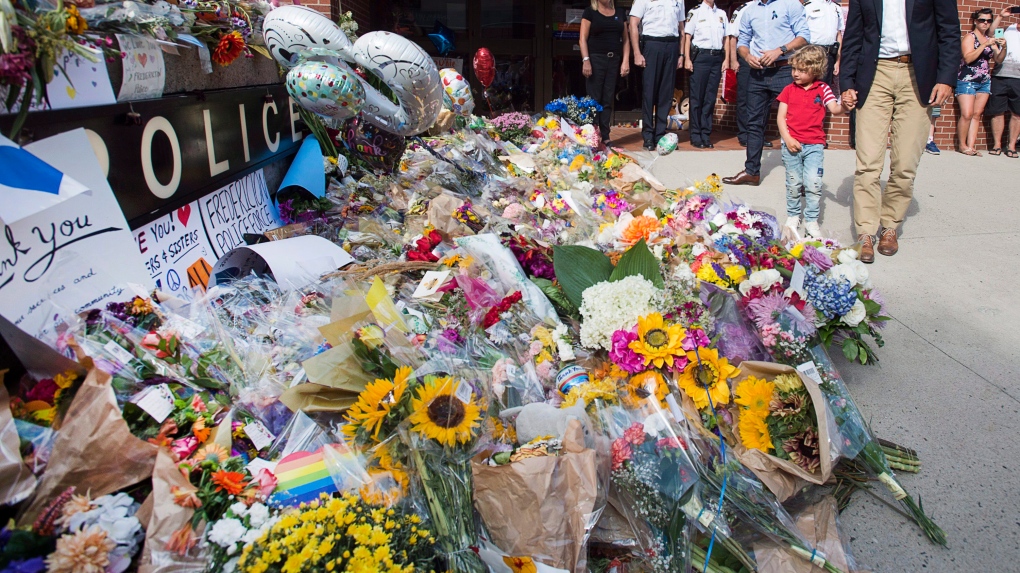 Flowers and notes left at the Fredericton police headquarters in memorial of the four that lost their lives in last Friday's shooting. (The Canadian Press)

FREDERICTON -- The start of a new week marks a time for Fredericton to begin healing as a community, the city's police chief said Sunday, as officers cleaned up a makeshift memorial dedicated to two constables gunned down earlier this month.

Just over a week after officers Robb Costello and Sara Burns, along with civilians Bobbie Lee Wright and Donnie Robichaud, were shot dead outside an apartment complex, Leanne Fitch issued a lengthy statement on the force's website.

"I know that none of us will ever forget that day, but in memory of the four people who lost their lives, it's time for us to heal, so that we can continue to build on their legacy," she wrote.

"There will still be difficult moments as we move forward, but we know that we must."

Since the shooting on Aug. 10, mourners flocked to the police station to pay their respects, leaving cards, flowers, signs and stuffed animals to pay tribute to the small police force.

"The constant line of people at our police station to drop off gifts and sign support messages has been overwhelming," Fitch wrote in her statement.

"Those gestures have meant so much to all of our employees. You have looked after us well and I can't begin to thank you enough."

On Sunday morning, officers collected the items to distribute among staff and the families of the fallen officers, marking what Fitch characterized as a step in moving forward from the tragedy.

"Monday marks a new day, a day to start the healing for all of us together as a community," she wrote.

The outpouring of sympathy was also noted by Costello's common-law spouse, Jackie McLean, who has been documenting her mourning process on Twitter.

"People are starting to pack up to go home and I'm not gonna lie. It's freaking me out a little bit," McLean tweeted Sunday.

"I've had all of you holding me up and squeezing me back together this past week. I'm going to need you to keep doing it."

The move to collect the cards and flowers came a day after the regimental funeral for Costello and Burns, which Fitch said was attended by thousands of police officers and first responders from across the continent.

"Thank you to those who made the trip to Fredericton to stand shoulder to shoulder with us, to share our grief, during this difficult time," she wrote.

Fitch also addressed the legal process that is just beginning to play out in the wake of the deadly shooting. Matthew Vincent Raymond, 48, will appear in court Aug. 27 to face four charges of first-degree murder.

In a statement last week, police asked that the public not speculate about the case or the alleged shooter's motives.

On Friday, a judge lifted a publication ban that had been imposed on court documents revealing details about how the deadly attack unfolded.

Monday's ban came hours after several media outlets had already reported on what the documents contained.

The now public documents say the accused gunman was wounded as he allegedly exchanged gunfire with another officer from his apartment window.