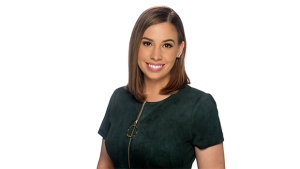 Jennifer Grudić is a co-host and weather specialist with CTV Morning Live.

Jennifer is a graduate of the Bachelor of Journalism program at the University of King’s College in Halifax. During her studies at King’s, she specialized in broadcast journalism, online journalism, and advanced television documentary.

She also holds a degree from Memorial University of Newfoundland and is currently enrolled in the Broadcast and Operational Meteorology program at Mississippi State University.

Jennifer grew up watching Breakfast Television and dreamed of one day becoming a morning television host. She began her broadcasting career in 2014 as a producer, reporter, anchor and sportscaster with News 95.7. Two years later, she made the transition to television, beginning as a video journalist with Global Halifax. Most recently, she worked with CBC Newfoundland and Labrador before returning to Halifax to join CTV Atlantic in 2019.

In her spare time, Jennifer enjoys spending time in the great outdoors with her son Zachary and fiancé Andrew Zachary, along with their two dogs - Zoey and Chloe. She is also a lover of music, cooking and baseball!