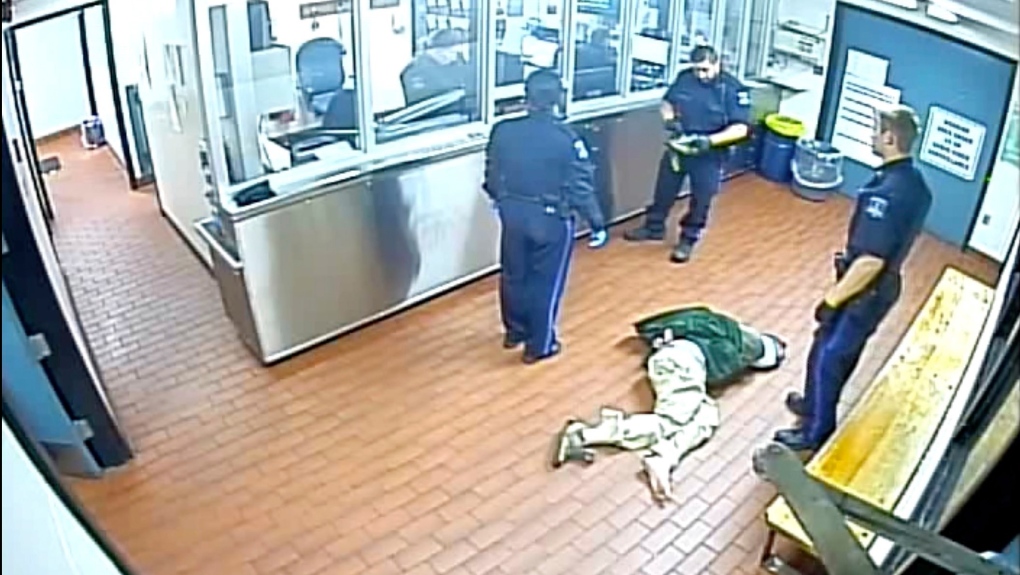 Corey Rogers lies on the floor under police custody at the Halifax police station, wearing a spit hood at about 11 p.m. on June 15, 2016 in this still image taken from surveillance video provided by Nova Scotia Courts. (THE CANADIAN PRESS/HO, Province of Nova Scotia Courts)

HALIFAX -- A Nova Scotia jury will return to deliberations Sunday morning in the case of two special constables charged in the death of an impaired 41-year-old man who suffocated in a Halifax police jail cell.

Daniel Fraser and Cheryl Gardner have been on trial in Nova Scotia Supreme Court on charges of criminal negligence causing the death of Corey Rogers on June 16, 2016.

The 12-person jury sent a series of notes to Justice Kevin Coady on Saturday asking for clarifications on the essential legal ingredients needed to convict the constables.

Under the Criminal Code of Canada, criminal negligence is defined as completing or omitting any duty in a way that shows "wanton or reckless disregard" for the lives or safety of others.

However, a note said jurors are unclear on a preliminary legal test of whether the special constables' actions were a "marked and substantial departure" from what a reasonably prudent person would do in the circumstances.

At 4:30 p.m. on Saturday, Coady committed to providing a written copy early Sunday morning of additional oral explanations he provided on this point during the deliberations.

As of 5 p.m. Saturday, the jury had been sitting for almost 11 hours.

The Crown has argued the death was caused by the constables' failure to follow basic safety practices, such as entering Rogers' cell and gently shaking him to see if he was conscious.

Prosecutor Chris Vanderhooft has also said Fraser and Gardner failed to fulfil their duty to care for Rogers by not removing a spit hood arresting officers placed on him, given the inmate's extremely intoxicated condition.

The jury was shown video of Rogers heaving in a cell while wearing the spit hood, and an autopsy suggested the inmate had vomited into the mask and died from suffocation.

The defendants have argued they were following the usual procedures when checking Rogers' cell, and the threshold for a criminal code conviction has not been met.

"All of us who work for a living know there are written rules and there are rules. You can't follow every rule blindly. You have to adapt the rules to your workplace," defence lawyer David Bright told jurors earlier this week.

"This was not in my respectful submission to you, criminal negligence. There was no marked departure from a baseline."

Both constables testified in their defence. Special constables are employed by the police department and are appointed to specialized duties as peace officers, including the booking of prisoners, but they are not considered police officers.

Fraser said he had been told by a superior that the requirement to rouse inmates only applied in "high risk" cases, and he did not consider Rogers to be such a case.

"He seemed to be sleeping it off," he testified.

He also said an arresting officer told him Rogers was "playing possum" when he appeared unable to stand in the entrance area to the jail.

Gardner testified she didn't notice anything unusual about the prisoner when she checked on him in his cell.

She said she looked in on Rogers several times while he was lying face down in a so-called "dry cell" and that on the first occasion he moaned and moved his shoulder in her direction.

However Gardner said she never entered the cell to check on him and assumed that he was just "sleeping it off" when he could be seen breathing but didn't respond to her later questions.

Vanderhooft said video evidence showed the last time Rogers moved was between 11:38 and 11:41 p.m. on June 15, but it was two hours later when Fraser called out to Rogers and finally decided to enter the cell and remove the spit hood.

"Unfortunately it was too late. Corey had vomited long before and could not clear his own airway because the spit hood was covering his mouth," the prosecutor said.

The jury is gathering at 9:30 a.m. on Sunday to receive the new written instructions.

This report by The Canadian Press was first published on Nov. 9, 2019.