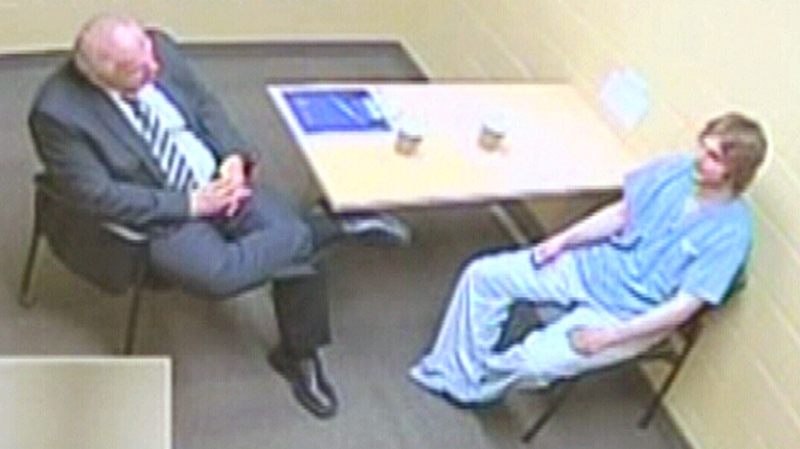 Justin Bourque is interrogated by an RCMP officer on June 6, 2014.

MONCTON, N.B. -- Justin Bourque was suffering from sleep deprivation and felt depressed about his life in the days before he committed one of the worst police shootings in Canadian history, newly released court documents reveal.

A court-ordered psychiatric report and a pre-sentence report shed light into Bourque's family history, social interests and the moment he reached "his breaking point" before he opened fire on RCMP officers in Moncton on June 4, killing three of them and injuring two others.

The documents are among a number of exhibits including a videotaped interview Bourque gave to police after his arrest that were made public when the Court of Queen's Bench ordered them released.

News media organizations including The Canadian Press asked for access to exhibits used to sentence Bourque, who pleaded guilty to three counts of first-degree murder and two counts of attempted murder.

In some ways, the documents portray someone with a fairly typical upbringing.

He is the third of seven children and as a child, he mowed lawns in his neighbourhood and delivered newspapers, spending the money he earned on Nintendo video games. At 16, he got a job at a Sobeys grocery store.

His psychiatric assessment, prepared in July while Bourque was held at the Shepody Healing Centre in Dorchester, N.B., for a month, says he was not clinically depressed nor did he suffer from any psychotic illness. It concluded he was fit to stand trial.

But the document shows signs of strain between Bourque and his family, particularly his mother, who home-schooled him and disliked his passion for video games.

"95 per cent of the time, he did not like being home-schooled," says the assessment written by Dr. Moses A. Alatishe. "He vented his anger and frustration towards his mother. He said, 'I wanted a normal life."'

He also felt he grew up in a "religious fanatic" environment believing he was a soldier of Jesus Christ, Alatishe wrote.

The assessment says an older friend taught him how to shoot when he was 15 years of age.

"He said he became gun crazy at this age," Alatishe says in the assessment.

The psychiatric assessment and pre-sentence report discuss at length his interest in heavy metal bands as he got older and his "chronic" marijuana smoking, a habit he picked up at 22.

The pre-sentence report says Bourque felt his marijuana smoking helped him cope with his negative thoughts about life, which included a disdain for authority.

In that same report, Bourque's parents Victor and Denise tell a probation officer that they noticed a "dramatic change" in their son in December 2013, when he became increasingly vocal about his dislike for police and "established societal norms."

"While Mr. Bourque was worried about his son, he continued to encourage Justin to stop worrying about issues beyond his control," says the report dated Oct. 10.

Both that report and his psychiatric assessment say Bourque's life unravelled further in the two weeks prior to the shootings as he was working 15-hour days at a wholesale outlet on two hours sleep and couldn't afford marijuana.

"Mr. Justin Bourque was in an emotional turmoil, disillusioned and confused from sleep deprivation and probably also withdrawing from marijuana (THC)," the assessment says.

"In a blind rage, he dressed up in camouflage and left his trailer. When he left the trailer, he said, 'I knew I was not coming back to the trailer alive."'

The pre-sentence report adds: "Justin Christien Bourque explained he was again working in a job he did not like, had no money and his romantic life was not going the way he had hoped. On the day in question he had decided he had reached his breaking point and was going to go live in the woods, with no plans to ever return home."

Bourque, now 25, is serving a life sentence with no eligibility for parole for 75 years. It is the most stringent sentence handed down in Canada since the last execution in 1962.