Kalin's Call: After a spring-like start, the week will turn wintry A pedestrian walks down the middle of the road on Victoria Street in Downtown Moncton, N.B., on Thursday, January 4, 2018. (THE CANADIAN PRESS/Stephen MacGillivray)

HALIFAX -- It was nice while it lasted.

Despite some cloudiness, as well as patchy fog and frost, it was a mild start to this last week of February. That turns with colder air arriving Wednesday night followed by a Texas low crossing on Thursday.

The Thursday system will bring a mix of heavy snow, ice pellets, and, in some cases, rain to the Maritime region. Winds will also turn gusty as the inclement weather moves through. The morning commute on Thursday should be OK, just cloudy with some patchy fog. By and through the afternoon, though, heavy snow will develop for New Brunswick with a mix of snow, ice pellets, and rain for P.E.I. and Nova Scotia. The heaviest of the precipitation clears through during the night, though areas of lighter snow and flurries will linger in the wake of the system on Friday. 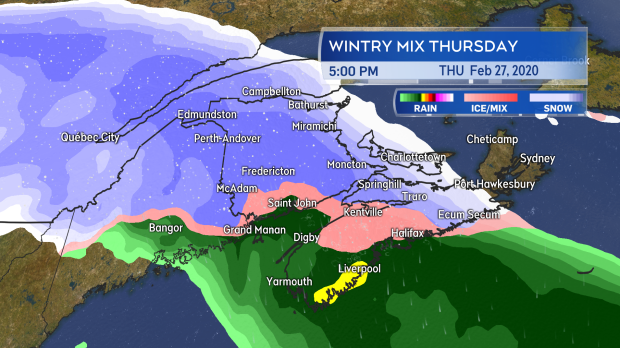 A mix of snow, ice pellets, and rain will develop across the Maritimes Thursday afternoon. Most of the precipitation will clear Thursday night, with some lingering snow and flurries for Friday.

The most snow will fall in New Brunswick. Much of the province can expect 15 to 30 cm. Snowfall amounts will be lower than 15 cm near the Bay of Fundy coastline due to more ice pellets and possibly rain mixing in.

Western P.E.I. and parts of Cape Breton could also see some snowfall amounts approach 20 cm. For mainland Nova Scotia, most will pick up an initial 2 to 8 cm of snow and ice pellets before a turn to rain. Rain totals looks highest for the South Shore, where up to 30 mm may fall. 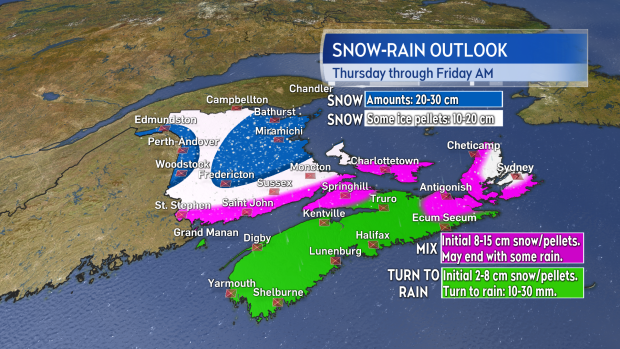 Conditions will be varied across the Maritimes. The heaviest snow will fall in New Brunswick, with the most rain falling on the South Shore of Nova Scotia. In between a mix of snow, ice pellets, and rain.

Winds will increase from an easterly direction through Thursday. They will peak in the evening with gusts 50 to 80 km/h for P.E.I. and Nova Scotia. For New Brunswick, most gusts will top out in a range of 40 to 60 km/h, though could hit close to 80 km/h on the coastline. The wind will turn west and southwest in the wake of the system on Friday and continue gusty for much of the day. Those areas that see primarily snow will also contend with blowing snow and reducing visibility. There may be some impact to travel services such as bridges, ferries, and airports, so those should be watched in the event of restrictions and delays. 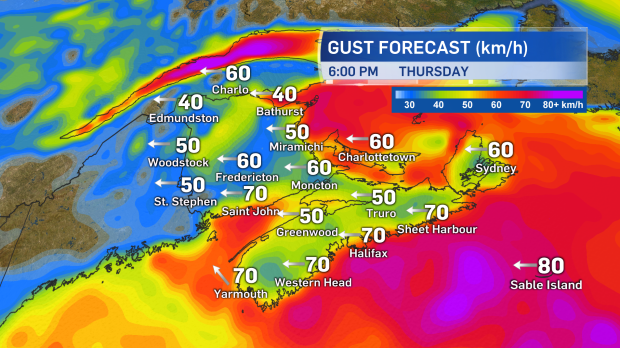 Wind will increase from an easterly direction to peak with gusts 50 to 80 km/h Thursday evening. Wind will turn west and southwest in the wake of the system on Friday, but remain gusty for most areas.

Special Weather Statements have been issued by Environment Canada for all three Maritime provinces. Given the mix of weather, it is likely that at least some warnings will be issued ahead of the arrival of the system. You should continue to check in on your local forecast for updates on alerts and the forecast. I'll have updates on our CTV News programming, including the CTV News at Noon, CTV News at 5, CTV News at 6, and CTV News at 11:30.