Kalin's Call: Alerts in place as Hurricane Dorian heads for the Maritimes 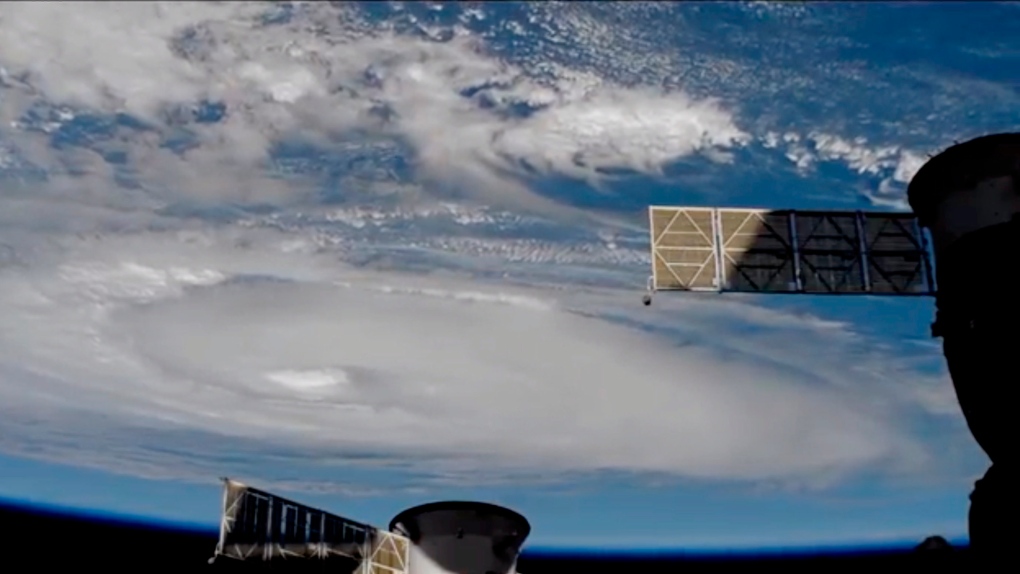 This satellite image provided by NASA from the International Space Station shows Hurricane Dorian on Thursday, Sept. 5, 2019. (NASA via AP)

On Friday Hurricane Dorian increased speed towards the northeast, now moving at near 30 km/h. The storm remains a Category 1 hurricane with maximum sustained wind near 150 km/h, with only slight weakening expected due to running into some stronger winds and dry air as it moves northward.

The latest forecast continues to take the hurricane into the southern marine waters of Nova Scotia early Saturday morning before approaching the Atlantic coastline later in the day. At this time, landfall looks to take place mid-to-late evening and in the vicinity of Halifax. There is still some uncertainty in the exact landfall point, and that may not be known until the storm is on approach Saturday.

Regardless, impacts will be widespread in Nova Scotia, southern New Brunswick, and Prince Edward Island. 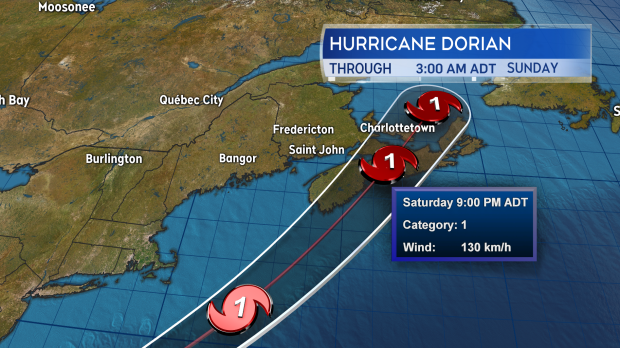 Heavy rain and downpours will fall to the north and west of the track of the storm. Northern and western mainland Nova Scotia, along the Bay of Fundy in New Brunswick into Moncton and the southeast, and Prince Edward Island look to pick up the most rain. In these areas, widespread amounts of 50 to 100 mm are possible with local amounts reaching 160 mm. Rainfall rates will be high increasing the risk of run-off and flash flooding. Rain totals will taper lower for eastern Nova Scotia and especially western and northwestern areas of New Brunswick.

The heaviest of the rain is generally expected Saturday afternoon and night. Steady rain may remain for P.E.I. and eastern areas of New Brunswick Sunday morning. 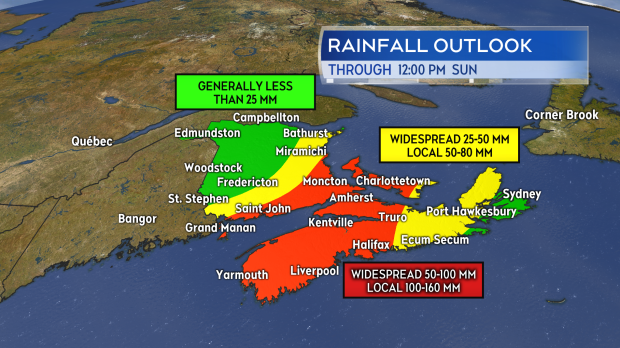 Winds are a major component of this storm. East and northeast winds will increase Saturday afternoon into the evening and night. Following the passage of the centre of the storm, the winds will turn west and northwest. Both ahead of and directly following the passage of the storm, widespread gusts to or in excess of 100 km/h look possible along the Bay of Fundy coastline in New Brunswick, P.E.I., and Nova Scotia. The strongest of those winds will be on the Atlantic coastline of Nova Scotia and in the vicinity of the landfall point. Gusts at that location could reach near 150 km/h. Due to the topography of the Highlands it is also possible that northern Inverness County could hit gusts of 150+ km/h as well.

Winds for most of the region will gradually diminish early Sunday morning. Strong winds gusts may linger for P.E.I. and Cape Breton into early Sunday afternoon.

Due to trees being in full foliage, the wind will have a greater force on them compared to winter. This increases the risk of branch and tree falls and hence the risk of power outages. Transportation services such as ferries, airports, and bridges are also likely to be impacted at times. 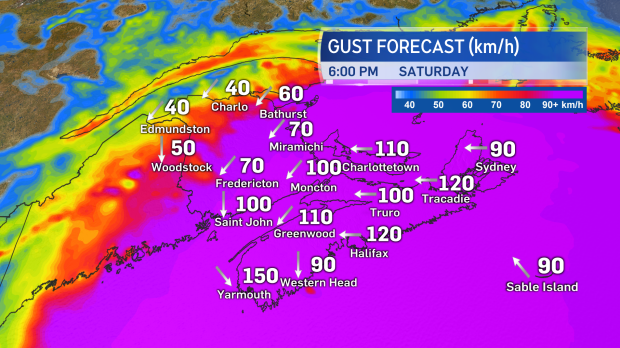 Storm surge will be a concern for coastal areas as the hurricane moves through. Wave height forecast models show waves of 7-10 metres building near the coastline of Nova Scotia beginning on the South Shore Saturday afternoon. From there, the higher waves spread up the Atlantic coastline of that province reaching then diminishing near Cape Breton early Sunday morning.

Sunday morning will also see an increase in wave heights of 4-7 metres near north-facing coasts in the Gulf of St. Lawrence. This would include P.E.I. and Cape Breton.

When combined with high tides, the rougher surf could lead to wash in low-lying coastal areas and roads. Individuals on the coast should use extreme caution as the storm moves through. Tide tables are readily available at www.waterlevels.gc.ca. 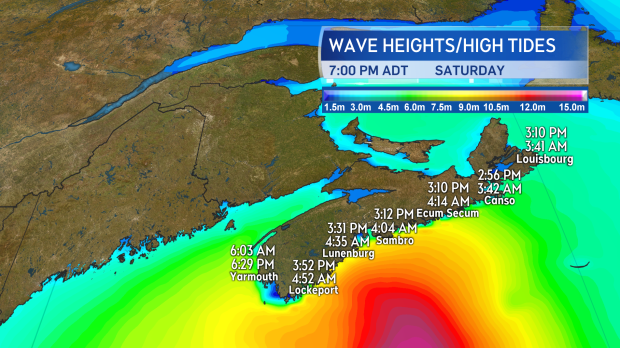 Midnight update by the National Hurricane Centre. Dorian a strong category 1 hurricane with maximum sustained winds near 150 km/h. NO LONGER FORECAST (by the NHC) to reach category 2.

Closes on the Atlantic coastline of Nova Scotia as a category 1 hurricane. pic.twitter.com/KSDyDD9KvR