A number of weather stations recorded record-low temperatures in the Maritimes on Monday.

Several other sites in the region came close to matching record lows. In general, morning temperatures were several degrees below early October averages, which range from about 2 to 6 degrees Celsius. Patchy frost and even some ice was spotted around the region to start the day. 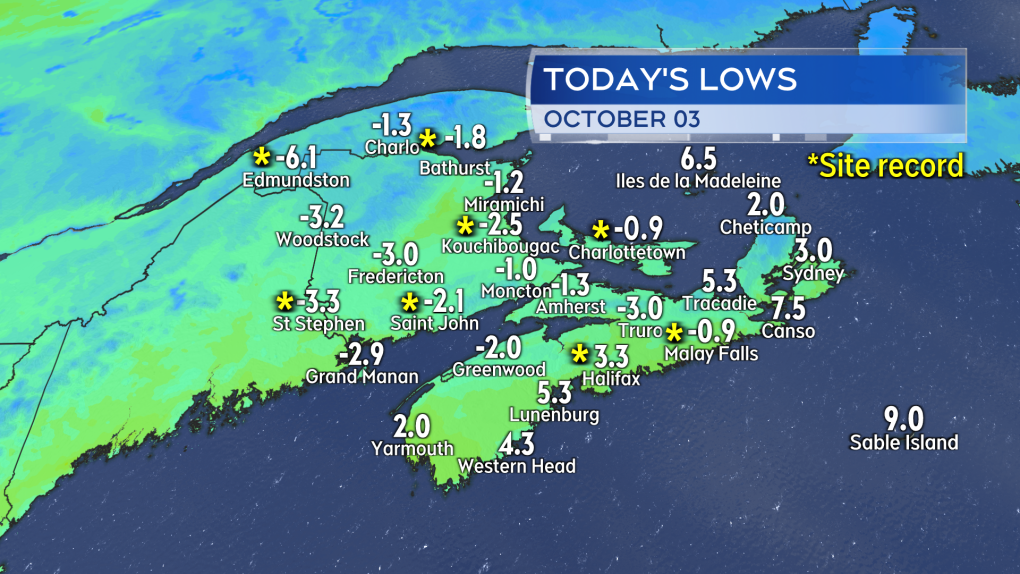 Recorded low temperatures were reported on Oct. 3, 2022. Some of the sites set new record lows for the date.

The combination of being on the eastern side of a high-pressure system set us up for the fall frost. The atmosphere circulates clockwise around high-pressure systems in the northern hemisphere. That circulation brought a northerly wind to the Maritimes that tapped into colder air in place in northern Quebec and Labrador. Additionally, the high pressure kept the night sky clear and the wind light, allowing for more radiational cooling (loss of heat due to emission of longwave radiation from the Earth’s surface). 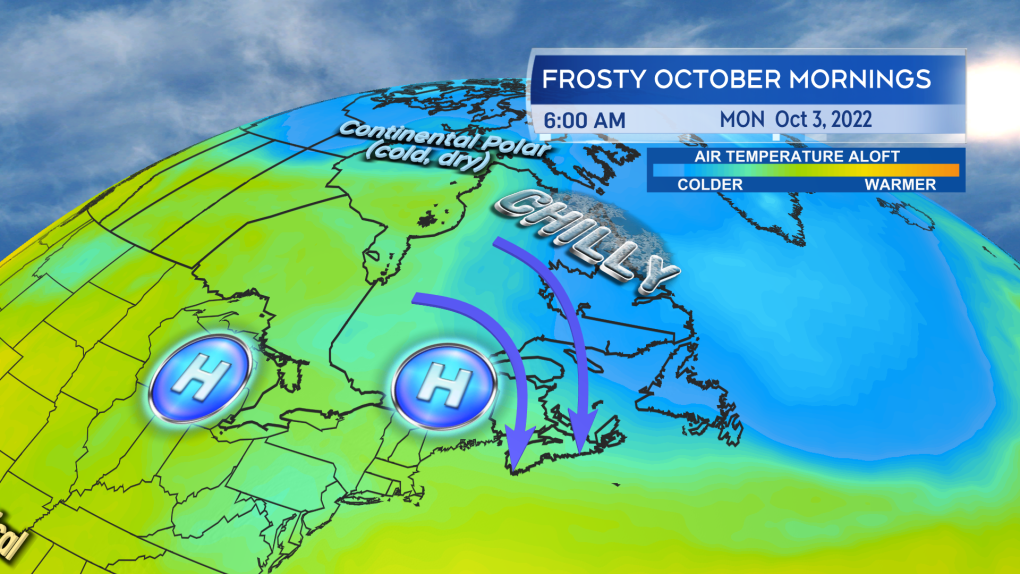 High pressure has brought a chillier northerly flow of air, clear sky, and light wind -- a perfect recipe for frost.

Given it’s a very similar weather pattern for Monday night, expect another chilly, even frosty, start to the day Tuesday. 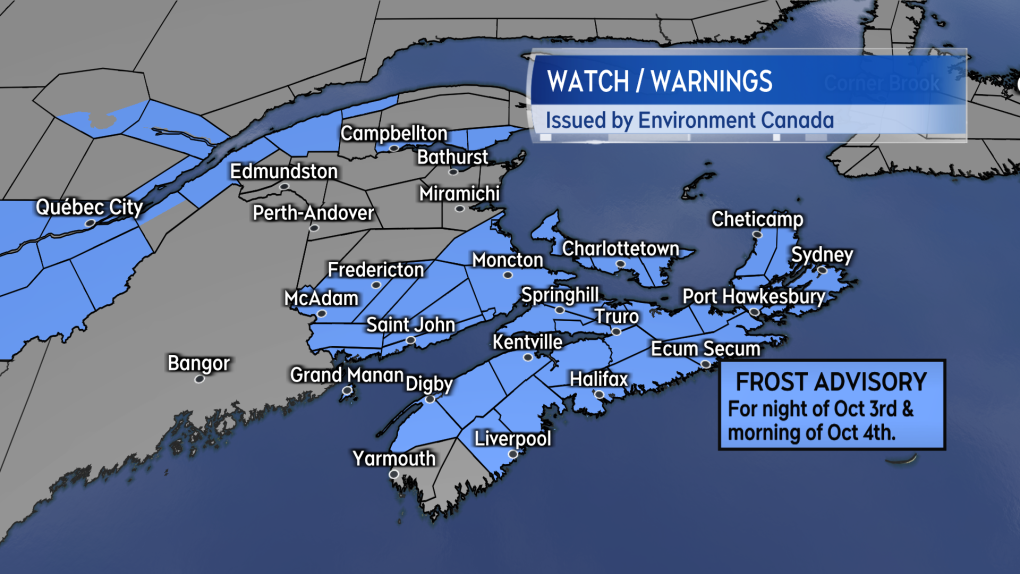 Another chilly early October night is ahead with more frost advisories issued.

The average first frost in the Maritimes ranges from early September in northwestern New Brunswick to late September/early October for much of the rest of the region.

Some coastal areas of Nova Scotia and eastern P.E.I. sometimes don’t see frost until mid-October. A turn to southerly winds will bring the overnight low temperatures up after Tuesday. That will last until Saturday night, when a northwest wind takes back over following the passage of a cold front on Saturday. 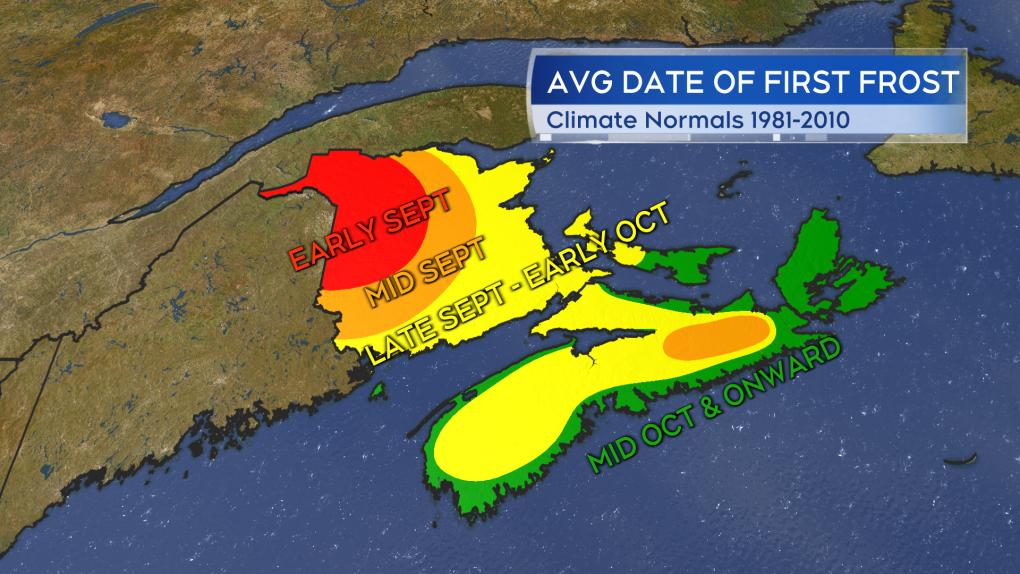 A general map on when parts of the region typically experience a first fall frost. Some areas, like the Cape Breton Highlands, lack data.

FBI Director Chris Wray is raising national security concerns about TikTok, warning Friday that control of the popular video sharing app is in the hands of a Chinese government "that doesn't share our values."

A U.S. woman was killed and four other passengers injured when a massive wave struck the Viking Polaris cruise ship while it was sailing toward the port of Ushuaia in southern Argentina on an Antarctic cruise, authorities said.

BoC expected to end year off with one more rate increase, likely to pause hikes soon

The Bank of Canada is expected to conclude a historic year marked by high inflation and aggressive monetary policy tightening with one more interest rate hike on Wednesday.

Myanmar's military-installed government has sentenced more critics to death, bringing the total to 139, and is using capital punishment as a tool to crush opposition, the UN high commissioner for human rights said Friday.

Prince William capped a three-day visit to Boston by meeting with President Joe Biden to share his vision for safeguarding the environment before attending a gala event Friday evening where he sounded an optimistic tone about solving the world's environmental problems through "hope, optimism and urgency."

Pentagon debuts its new stealth bomber, the B-21 Raider

America's newest nuclear stealth bomber made its debut Friday after years of secret development and as part of the Pentagon's answer to rising concerns over a future conflict with China.