Through the first part of this week, a series of coastal low pressure systems will stall in the vicinity of the Maritimes.

As they do, they will pull moisture up from the sub-tropical Atlantic, which will then come down on our region as an extended period of rain.

The most widespread inclement weather is expected Monday through Tuesday. It remains possible that parts of the Maritimes see additional rain on Wednesday and even Thursday. 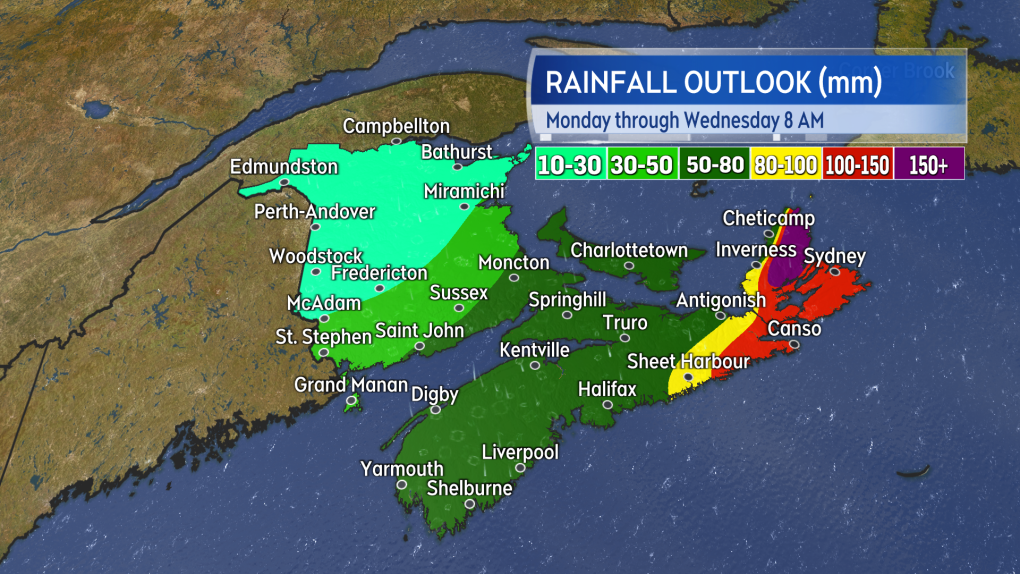 Heavier rain (dark green/yellow) develops in the southwest as early as Monday morning. After that, it is a slow shift eastward into, and through, Tuesday.

As it stands, eastern Nova Scotia is expected to see the highest overall rain totals.

A widespread 80 to over 100 mm can be expected in the eastern Halifax County and across Cape Breton. This rain falls in a span of about 36 hours.

There will also be a risk of flooding and flash flooding. Communities in Cape Breton County and Victoria County in Cape Breton should be especially cautious as a number of forecast models continue to come in with a risk of pockets of 150 mm or higher. Victoria County has an elevated risk of seeing those higher amounts due to lift provided by the higher terrain. Should you encounter washouts, be aware that flood waters on roads can be deceptively deep and fast moving.

The remainder of Nova Scotia, parts of southern New Brunswick, and P.E.I. can expect a general rainfall of 50 to 80 mm. Some localized flooding may occur. Rainfall totals taper lower moving further north into New Brunswick. Expect reduced visibility and hydroplaning conditions on roadways at times Monday and Tuesday. 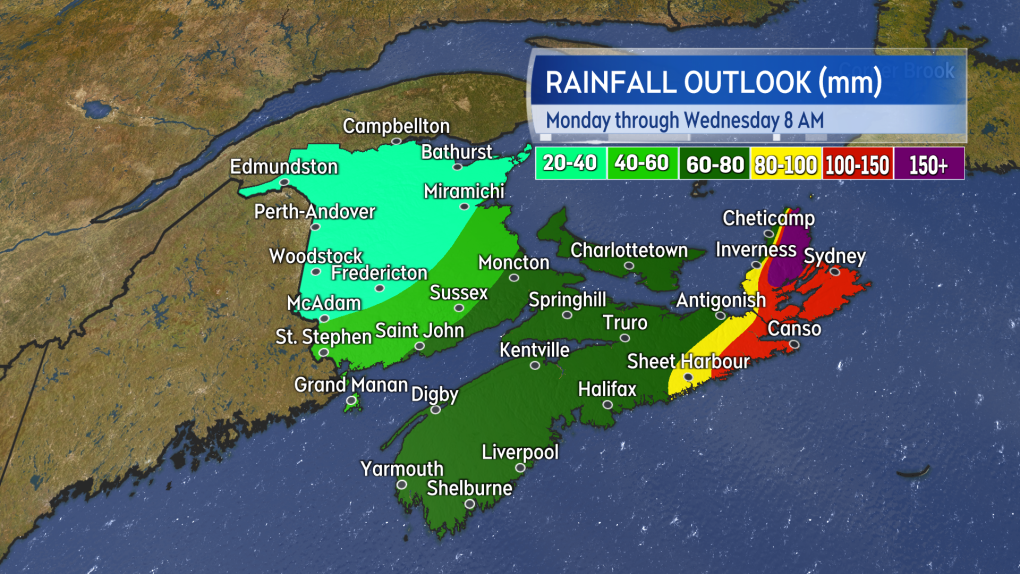 The highest rainfall totals are expected in eastern Nova Scotia. For much of Nova Scotia, southern New Brunswick and Prince Edward Island, enough rain is expected that there is a risk of poor driving conditions and localized flooding.

There is a risk of high winds for Nova Scotia and P.E.I. late Monday into Tuesday. Southerly wind gusts 70 to 90 km/h will develop near the Atlantic coastline of Nova Scotia Monday evening. 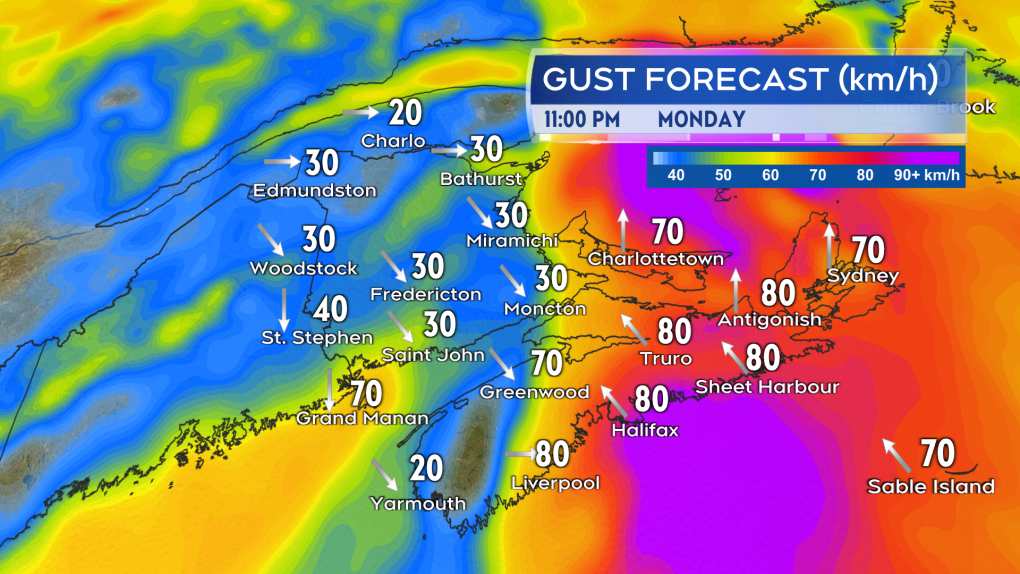 Those stronger winds shift eastward Monday night into Tuesday morning, bringing a risk of gusts to 90 km/h to P.E.I. and Cape Breton. For Cape Breton, the stronger winds persist into Tuesday afternoon before diminishing Tuesday evening. Due to the topography of the Cape Breton Highlands it’s very likely that northern Inverness County experiences gusts up to, or exceeding, 110 km/h Tuesday morning and afternoon (Les Suetes Wind). 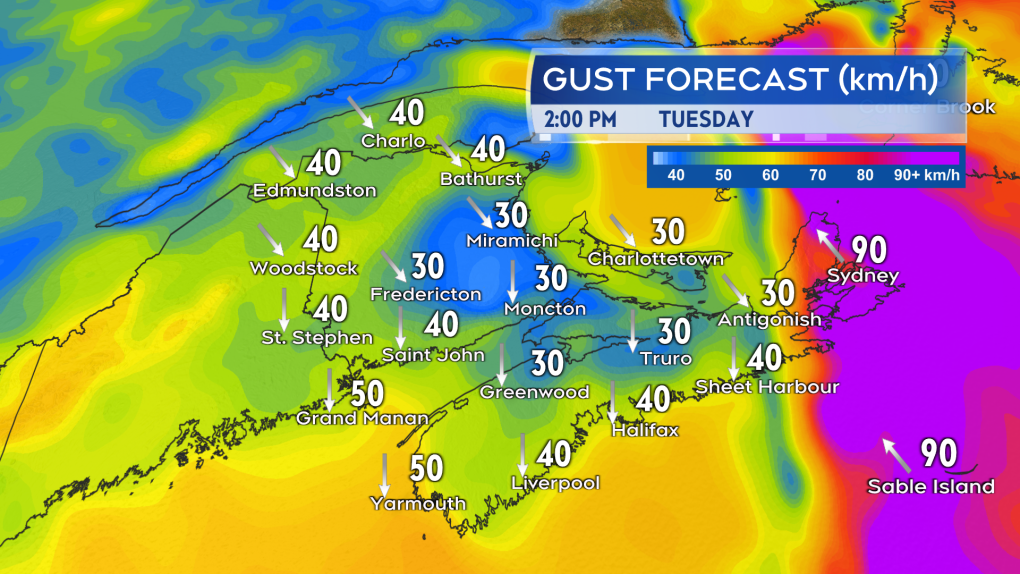 Like the rain, the strongest of the winds shift eastward into, and through, Tuesday.

Best to secure any easily windblown objects such as Christmas decorations and be aware that there could be some power outages.

Check frequently on your forecast. Special Weather Statements are still in effect by Environment Canada for much of the Maritimes. Some areas will assuredly see weather warnings issued.