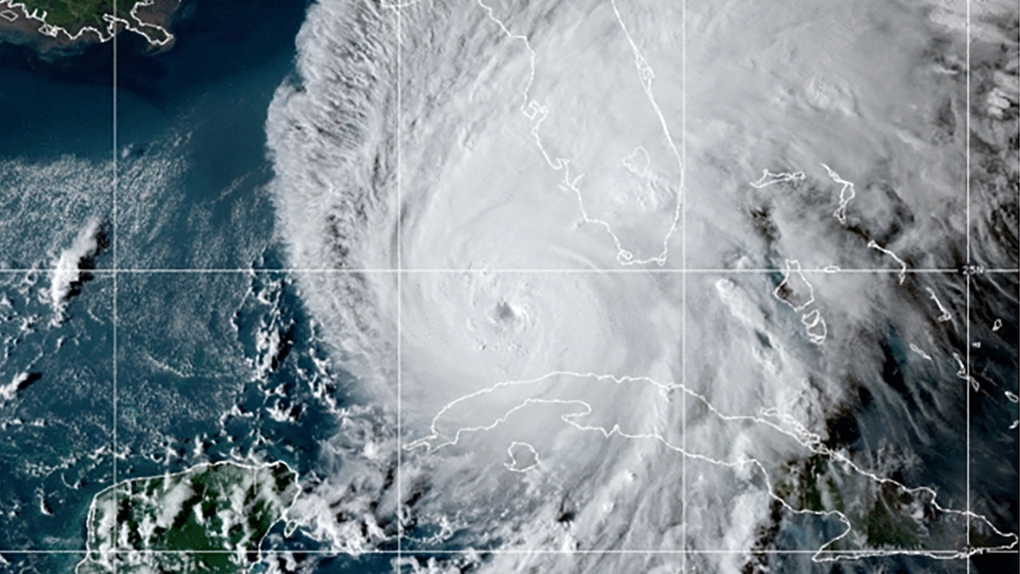 This GOES-East GeoCcolor satellite image taken at 10:10 p.m. EDT on Tuesday, Sept. 27, 2022, and provided by the National Oceanic and Atmospheric Administration (NOAA), shows Hurricane Ian over the Gulf of Mexico. (NOAA via AP)

Hurricane Ian was in the process of making landfall in western Florida Wednesday afternoon as a major Category 4 hurricane, with maximum sustained winds in the eyewall of the storm near 250 km/h. 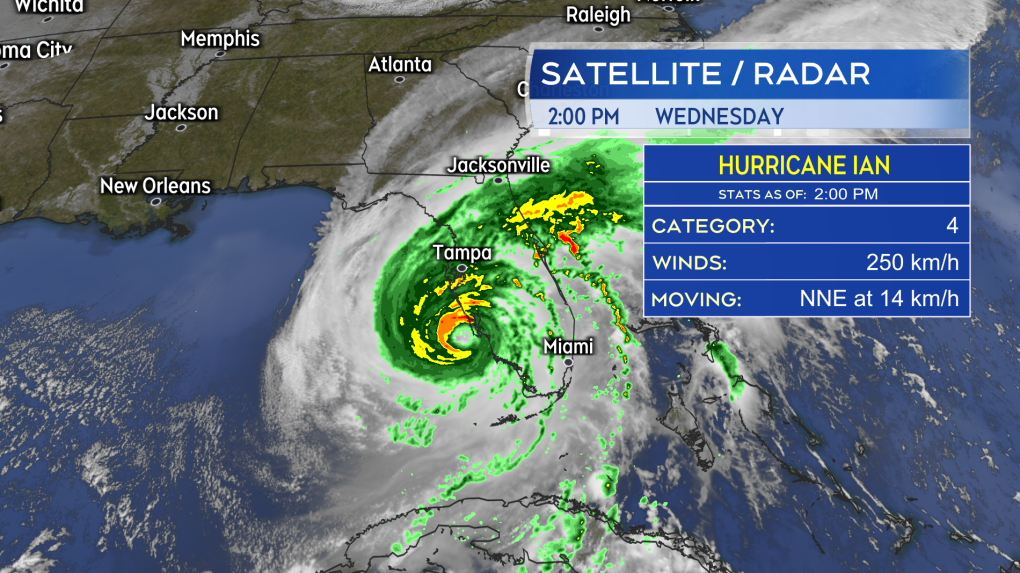 Ian approaches the western coastline of Florida as a major category 4 hurricane.

The storm is much more compact compared to the arrival of Fiona for Atlantic Canada. That means the more intense weather conditions, including the highest winds, are more tight to the centre of the storm. Severe impacts from Ian are forecast for Florida, including a storm surge that could reach 3.5 to 5.5 metres, or 12 to 18 feet, on parts of the coast from Englewood to Bonita Beach. The most damaging winds will occur near and east of the landfall point, which looks to be between Fort Myers and Punta Gorda. Heavy rain will bring a risk of inland flooding and tornadoes are a risk in thunderstorms arriving onshore. 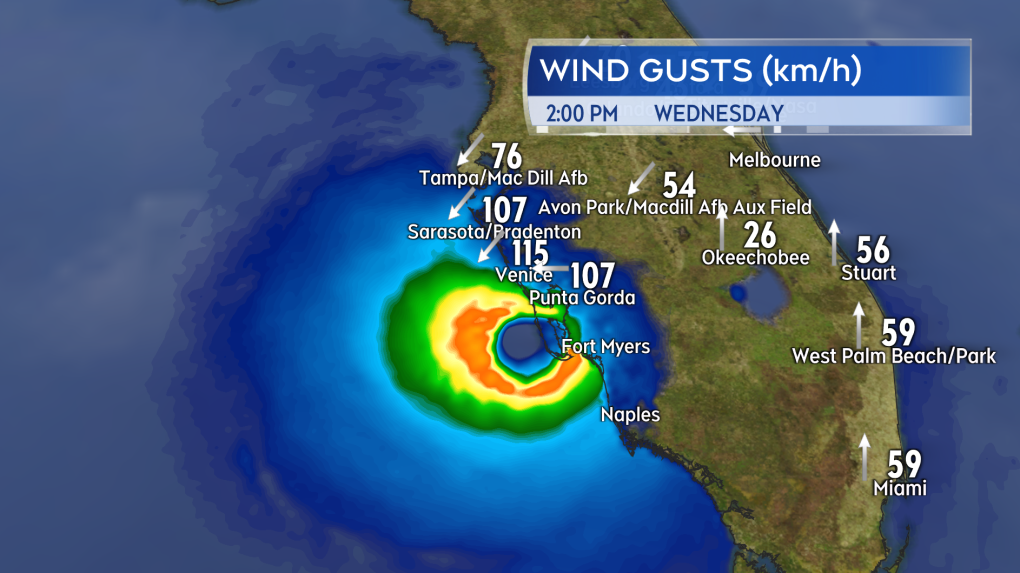 The long-range weather pattern continues to be favourable for minimizing the risk of significant impact from Ian, or the remnants, for the Maritimes and Atlantic Canada. As Ian continues to move inland into the southeastern United States, a ridge of high pressure builds into the Maritimes Friday. That high-pressure system will help to keep Ian south and east of the region. There is little indication that even the remnant rain from the storm could approach as far out as the upcoming weekend. 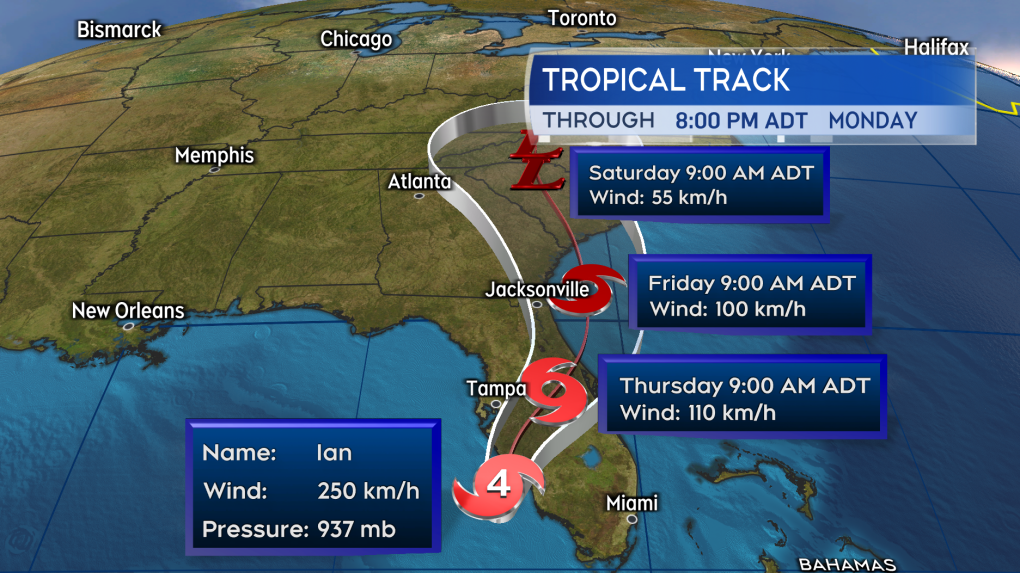 Ian will slowly move inland in the southeastern United States through the remainder of the week. Heavy rain will continue to be a concern even as the risk of wind damage and storm surge declines.

In fact, it looks like that high-pressure system will give us some much needed fair weather late week through the weekend. Clearing is forecast Thursday into Friday. A mix of sun and cloud on the weekend, then a sunny start to next week. High temperatures will generally range in the mid-to-high teens through Saturday. Somewhat cooler weather is expected Sunday, as high temperatures come down into the low-teens. Saturday night, Sunday night, and Monday night all look chilly-to-brisk with low temperatures well down into the single digits.

The verdict is in: A four-day work week is good for business. After six months, most of the 33 companies and 903 workers trialling the schedule, with no reduction in pay, are unlikely ever to go back to a standard working week, according to the organizers of the global pilot program.

Senators have voted to ask Gov. Gen. Mary Simon to have their former colleague Don Meredith stripped of his "Honourable" title.

Drug slows Alzheimer's but can it make a real difference?

An experimental Alzheimer's drug modestly slowed the brain disease's inevitable worsening, researchers reported Tuesday – but it remains unclear how much difference that might make in people's lives.