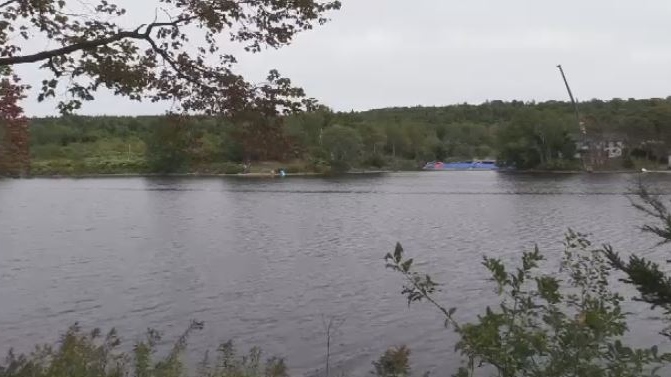 The dry stretch of summer weather is starting to manifest as various issues in the Maritimes.

At the end of July, Agriculture and Agri-Food Canada rated northern New Brunswick as “abnormally dry.”

The fire weather index has climbed for the region over the last several days, resulting in occasional bans on open fires.

In the CTV Weather Centre, I’ve been receiving reports from people about dry lawns and hobby gardens, as well as concerns over low well-water levels.

July was, in general, a dry month for the Maritimes, and so far August has followed suit. As we head into the close of this month, many locations across the Maritimes are sitting at or below near half the 30-year normal for August rainfall. There are some exceptions, with some western and southern areas of New Brunswick sitting between 55-75 per cent of the climate normal. Some of the drier areas this month include the Charlottetown area for P.E.I., Cape Breton, the Halifax area, and the south shore of Nova Scotia. 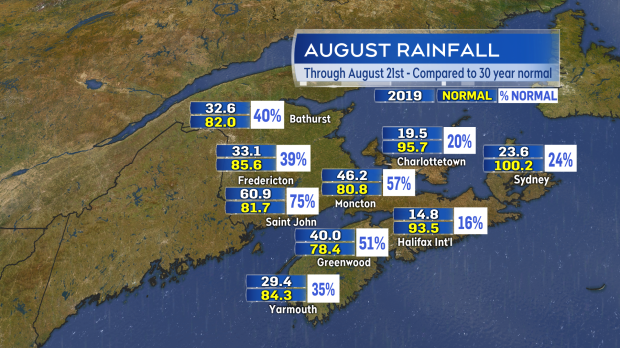 Is there rain and relief in sight? Not much over the next several days.

Thursday afternoon and evening will see a cold front move into New Brunswick. That will produce some widely-scattered showers with a risk of thunderstorms. Rainfall is expected to be brief and light, with the exception of any area that sees a thunderstorm pass directly over. That same front will stall over Nova Scotia for the first part of Friday and may produce a few more showers. After a slight chance of a shower on Saturday, Sunday will be dry as high pressure moves in.

That high-pressure system looks to keep rain away for much of next week.

Most long-range forecast guidance has the system remaining in place, holding areas of low pressure to the south and east. As a result the rain from those lows is expected to be kept over the Atlantic Ocean. It may take until Thursday or Friday of next week for it to break down, at which point we could once again watch for some weather fronts to bring in rain or showers. 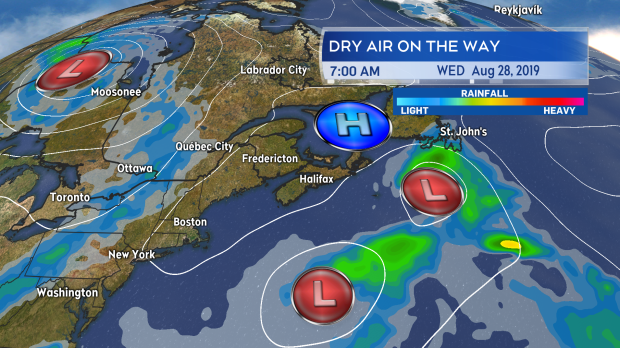 How about the long, long-range forecast?

Looking at monthly and seasonal forecasts, it is important to recognize that the skill for predictions, when it comes to precipitation, falls below those of other variables, such as temperature. That said, the seasonal guidance produced by Environment Canada still has near-normal amounts of precipitation for the Maritimes, August-September-October inclusive, which means that the next two months would need to see a return to near-or-above-normal rainfall. Guidance run out of the United States predicts slightly below-normal amounts of rain for September, with near-to-above -normal amounts for October.