An area of low pressure originating off the coastline of Florida will merge with a cold front on Friday. The resulting storm will rapidly strengthen into a nor’easter, which will move north to impact the Maritimes Saturday into Sunday.

Much of the Maritimes will have to contend with a period of heavy snow with some areas turning through ice pellets to rain. High and gusty winds will create blowing snow and give a risk of power outages for some areas.

Special weather statements cautioning on the inclement weather have been issued by Environment Canada for all three Maritime provinces. 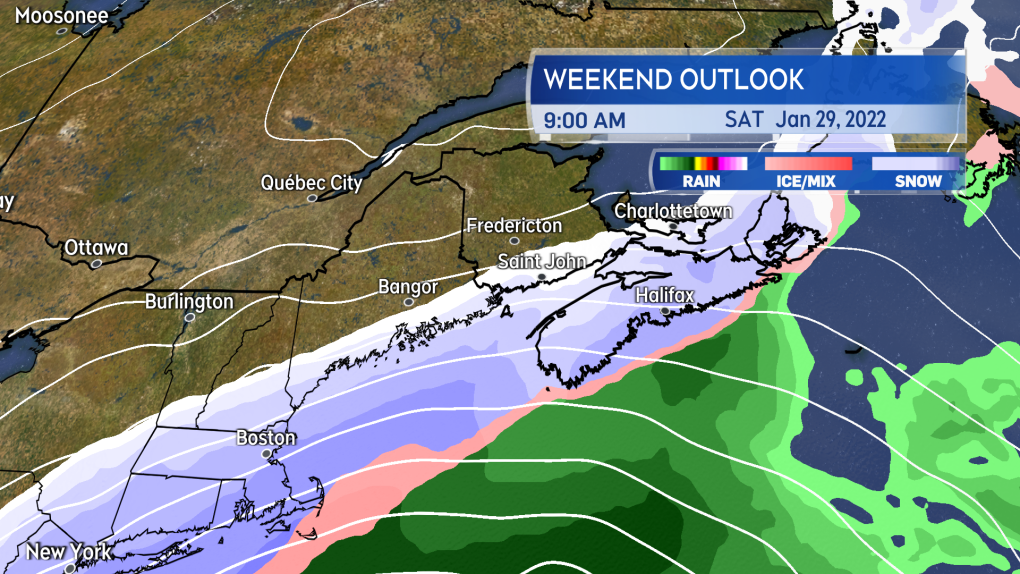 Heavy snow is expected to arrive in Nova Scotia Saturday morning, and will arrive Saturday afternoon for New Brunswick and P.E.I.

By Saturday evening, much of Nova Scotia will have turned through a period of ice pellets to rain. P.E.I. can expect ice pellets and rain to mix in Saturday night. Snow will continue in New Brunswick into Sunday morning.

The mix of precipitation will clear the Maritimes through the day on Sunday. Temperatures will fall back below freezing for Nova Scotia and P.E.I. quickly on Sunday, with wet or slushy surfaces turning icy. 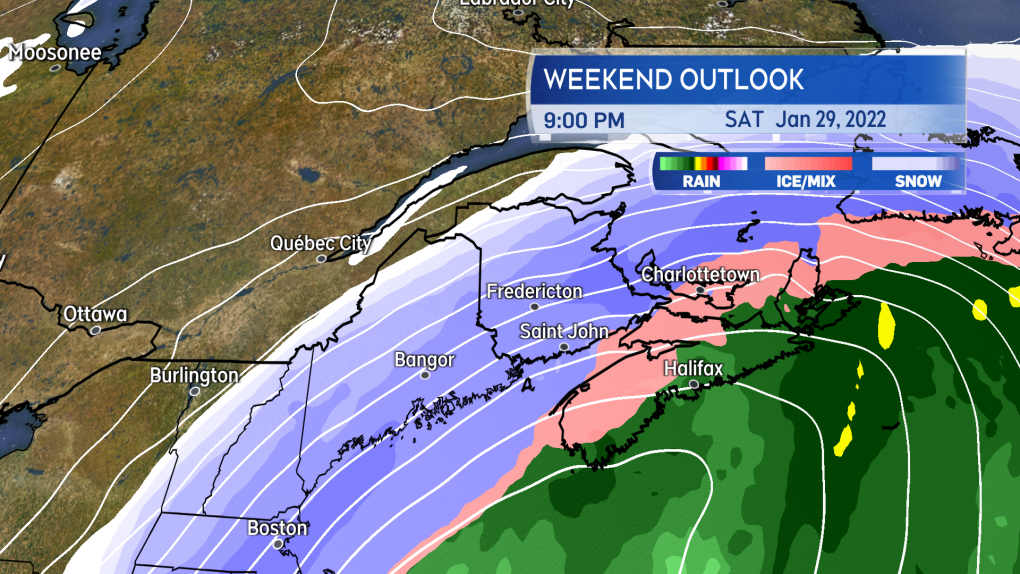 By Saturday evening, Nova Scotia will be in a mix of snow, ice pellets, and rain. Mixed precipitation is also likely for P.E.I. Saturday night.

In the above scenario, the most snow and ice pellet accumulation would be in western/northern Nova Scotia, southern/eastern New Brunswick, and P.E.I. Snowfall totals would diminish towards the Atlantic coastline and eastern areas of Nova Scotia with a quicker turn to rain.

Snowfall totals would diminish into northwestern New Brunswick being on the fringe of the storm. Areas experiencing the turn to rain would have a risk of localized flooding as the rain could total 10 to 40 mm and combine with snow melt.

Drainage systems may be blocked with snow and ice. 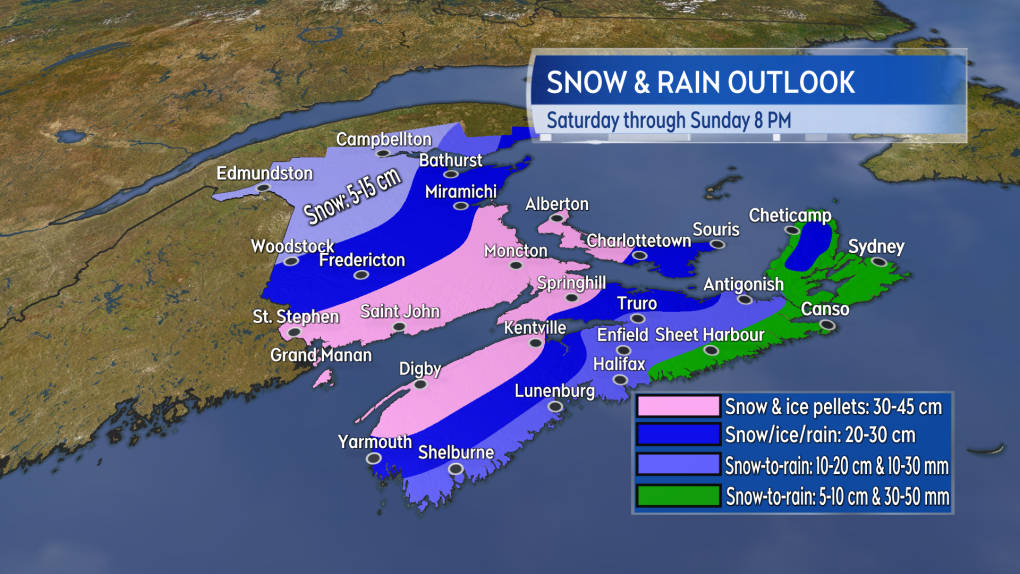 There is time for change, but as it stands western/northern Nova Scotia, southern/eastern New Brunswick, and P.E.I. are likely to see the highest snow totals.

A period of northeast and east winds peaking with gusts 60 to 90 km/h is likely Saturday afternoon into night. Where snow is falling heavily, visibility may be reduced to white-out conditions. Wind will turn westerly for Sunday and diminish through the day.

We are still sitting nearly three days out from the start of the storm. There is time to see significant change in the forecast. A pass of the system further east of the Atlantic coastline of Nova Scotia would result in an increase in the snow forecast for that province and lower totals for New Brunswick and P.E.I.

It is strongly recommended that you check frequently in on the weekend forecast through the end of this week.

CTV Chief Meteorologist Kalin Mitchell will have daily updates on the storm on CTV Atlantic news programs, as well as online.

UPDATED | Ont. and Que. scramble to recover from thunderstorm that left at least 8 dead

What is a 'derecho'? Climatologist explains Saturday's powerful storm

The storm that moved across Ontario and Quebec Saturday is known as a 'derecho', a powerful kind of windstorm that is long lasting and far-reaching.

More than 1,000 lawyers in Ontario have signed a petition to make all court appearances 'presumptively virtual unless parties and their counsel agree otherwise.'

Guests at an Indigenous-owned resort in B.C.'s Interior were evacuated Sunday morning and watched as firefighters tried to contain the flames that had engulfed the building's roof.

Russia pressed its offensive in eastern Ukraine on Sunday as Poland's president traveled to Kyiv to support the country's European Union aspirations, becoming the first foreign leader to address the Ukrainian parliament since the start of the war.

Beginning at sunrise on Monday, the Tk'emlúps te Secwépemc will host a solemn day of ceremony and reflection to mark the one-year anniversary of unmarked graves being located at the site of the former Kamloops Indian Residential School.