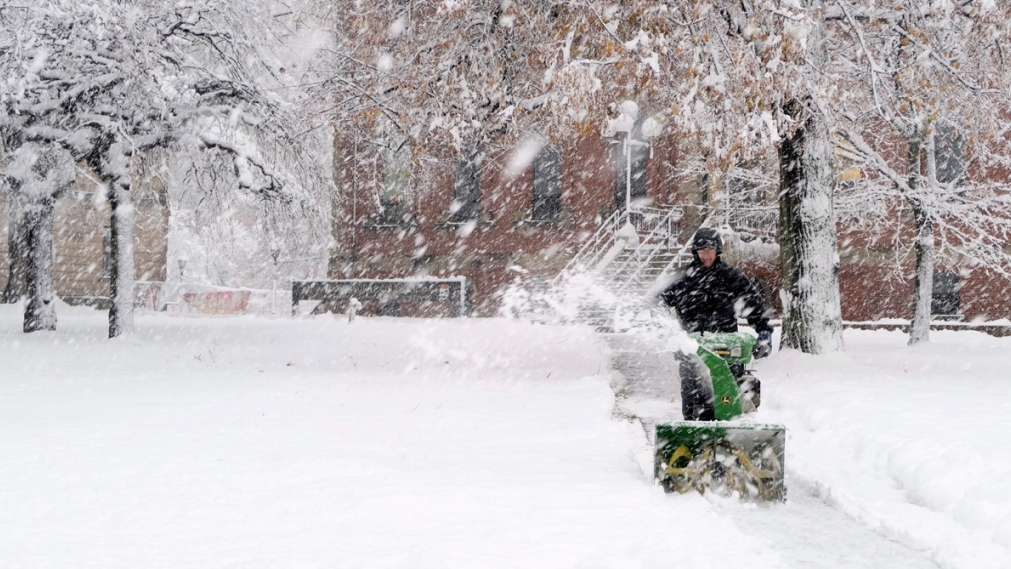 A man uses a snow blower in front of the Coles building in downtown Charlottetown on Nov. 30, 2016. (John Morris / THE CANADIAN PRESS)

A low-pressure system east of Florida will merge with a cold front to develop into a powerful winter storm that will move northward, just off the eastern U.S. seaboard, before crossing Nova Scotia into the Gulf of St. Lawrence by Sunday.

The central pressure of the storm, a measure of its strength, will fall rapidly Friday into Saturday - classic nor’easter development. You may hear this system referred to as a “weather bomb” which is a reference to the speed at which it develops, including a drop of central pressure by more than 24 millibars in 24 hours. 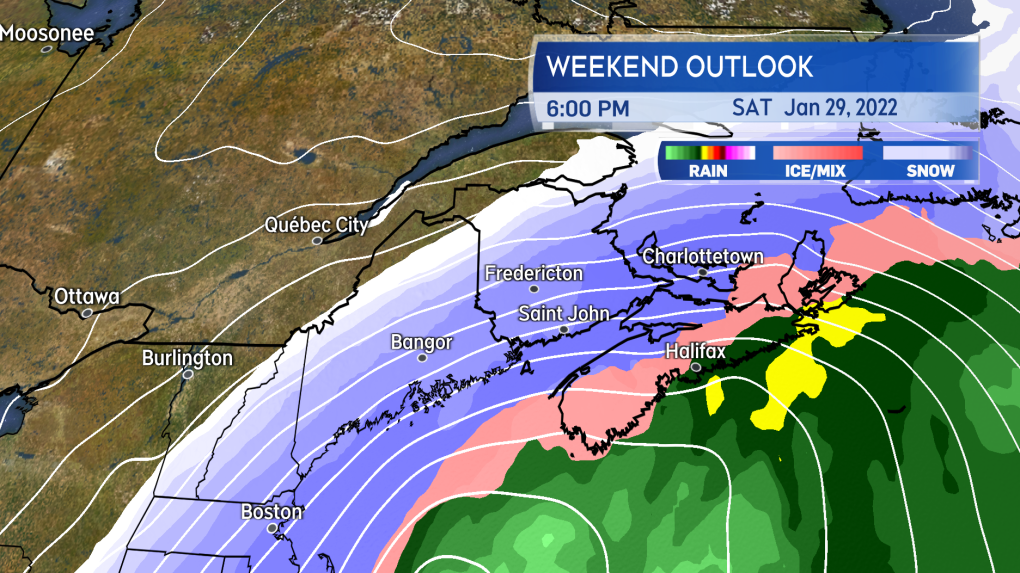 Weather conditions deteriorate in the Maritimes Saturday morning through afternoon.

Heavier snow arrives for Nova Scotia Saturday morning. Heavier snow reaches New Brunswick and Prince Edward Island Saturday afternoon. Much of Nova Scotia turns through ice pellets and freezing rain, to rain Saturday afternoon. Ice pellets, freezing rain, and rain mixing in for P.E.I. Saturday evening. Snow continues for New Brunswick into Sunday morning. The mix of precipitation in the Maritimes clears west-to-east Sunday morning and afternoon. A quick fall in temperatures, back below zero, on Sunday for Nova Scotia and P.E.I. will turn wet and slushy surfaces to ice. 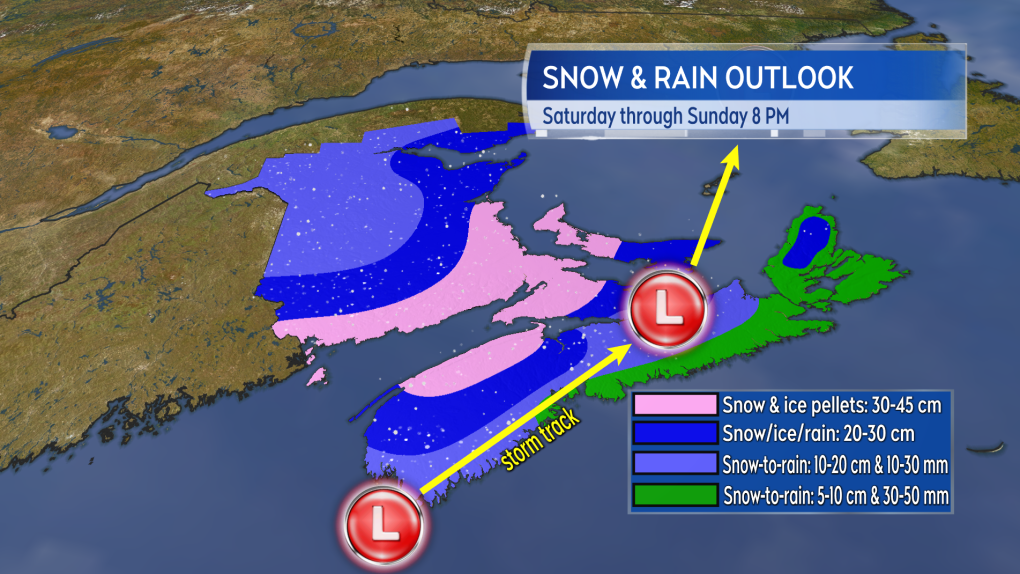 The centre of the storm passes near the South Shore of Nova Scotia before crossing northern areas of that province and P.E.I. on the way into the Gulf of St. Lawrence.

The track of the storm looks like it will hug the South Shore of Nova Scotia before crossing the north of the mainland and P.E.I. on the way into the Gulf of St. Lawrence. That passage is favourable for higher snowfall totals in western/northern Nova Scotia, southern/eastern New Brunswick, as well as P.E.I. Snow accumulation tapers lower towards the Atlantic coastline of Nova Scotia and the east of the province, including Cape Breton, as a quicker turn to rain will occur. Snowfall will taper lower into the northwest of New Brunswick being on the fringe of the storm.

Localized flooding is a risk where the system turns to heavy rain for Nova Scotia. The ground is frozen and drainage systems may be blocked by snow and ice. 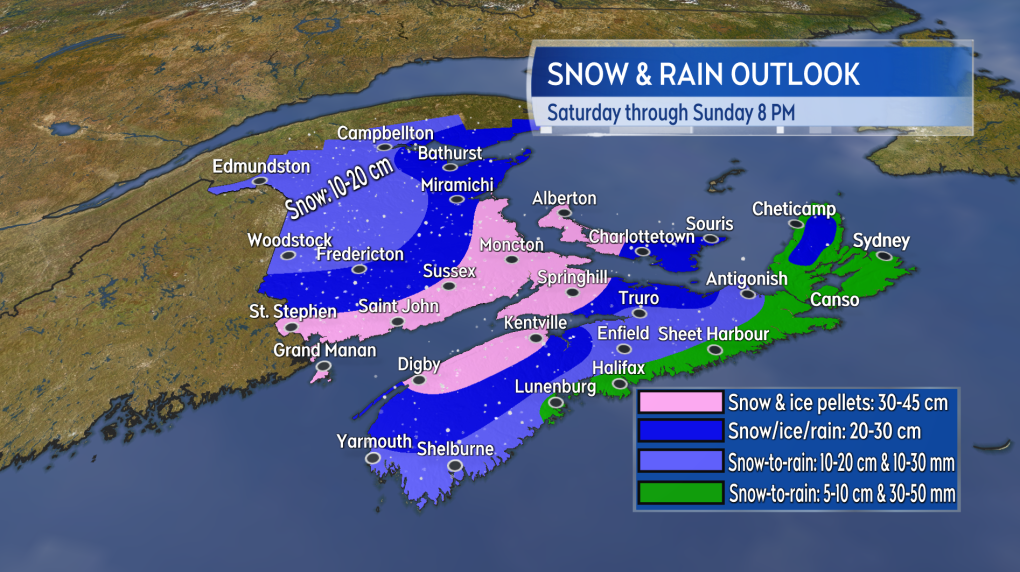 Living up to the name, there will be a period of stronger winds from the north and northeast during the passage of the nor’easter. Expect those winds to ramp up Saturday afternoon into night. Widespread gusts of 50 to 80 km/h can be expected with exposed areas of the coast peaking 80 to 100 km/h. Northern Inverness County in Cape Breton will hit gusts above 100 km/h Saturday evening and night due to the topography of the Highlands. Visibility will be reduced in blowing snow and rain. You may want to plan to avoid or limit unnecessary travel Saturday afternoon and night if you are in an area expecting the heavier snow or heavier mix of precipitation.

Winds will turn northwest and west on Sunday diminishing through the day. 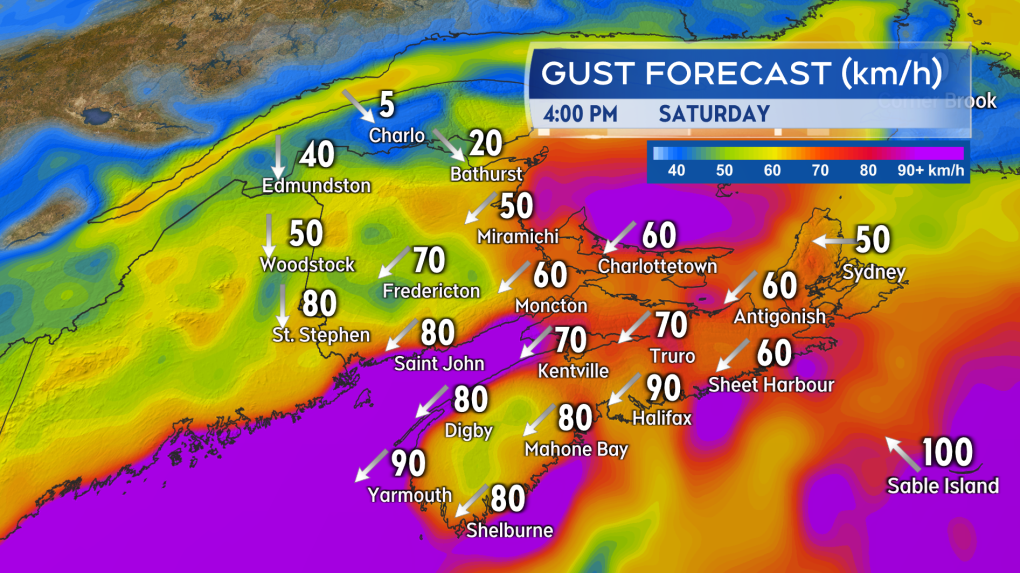 Special Weather Statements remain in effect for all three Maritime provinces. In the statements, Environment Canada advised the public to monitor the forecast and any weather alerts issued in the coming days. I’ll have daily updates on CTV Atlantic news programming and online.

Russia asserted Saturday that its troops and separatist fighters had captured a key railway junction in eastern Ukraine, the second small city to fall to Moscow's forces this week as they fought to seize all of the country's contested Donbas region.

The Supreme Court of Canada’s ruling allowing the Quebec City mosque shooter to be eligible for parole after 25 years is raising concern for more than a dozen similar cases.