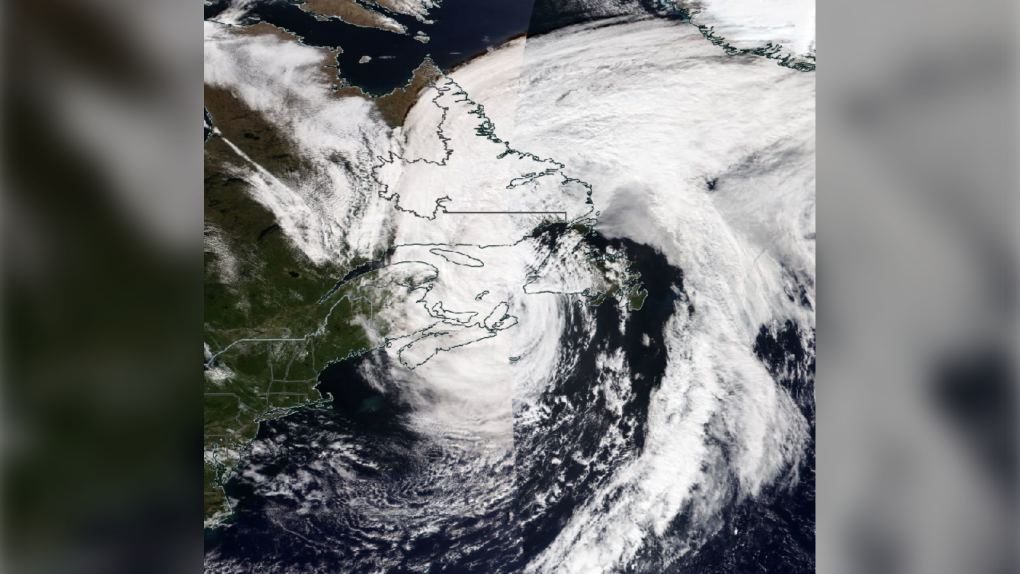 A satellite image of Fiona from Saturday. After becoming post-tropical the severe storm resembles a winter time nor’easter.” 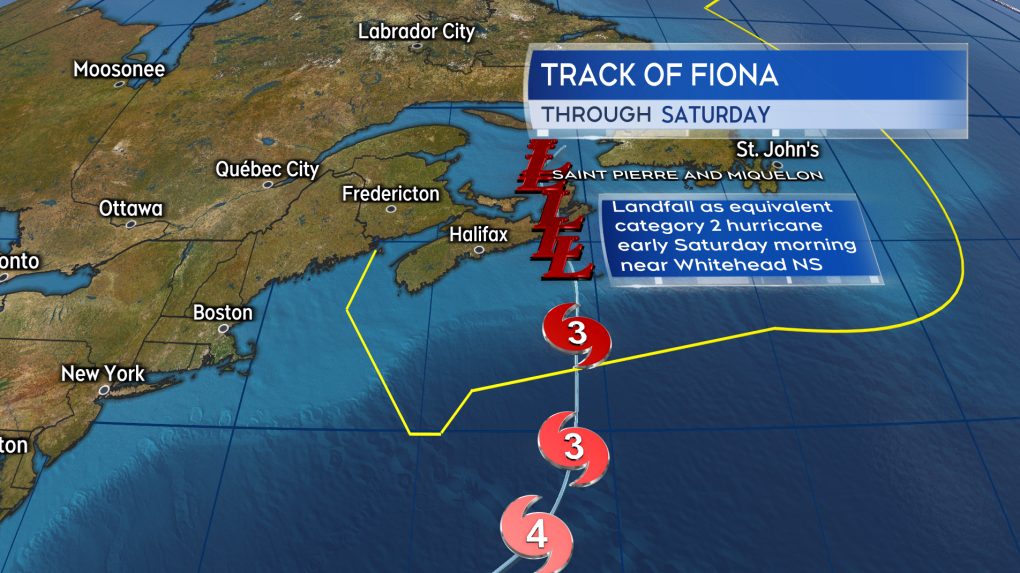 The historical track of Hurricane Fiona as it approached and made landfall in the Maritimes.

Fiona peaked as a category 4 hurricane as it turned northward east of the Bahamas. After colliding with a cold front, Fiona transitioned into a post-tropical storm equivalent to a category 2 hurricane. Fiona then made landfall near Whitehead, Guysborough County, N.S. shortly after 4 a.m. Saturday morning.

The transition to a post-tropical storm is one of physics and structure, not a weakening of the storm. A post-tropical transition is common for hurricanes at northern latitudes. The storm grows in size, becomes asymmetrical, and starts developing a set of weather fronts. It starts to draw energy from temperature differences in the atmosphere instead of warm ocean water. The transition process can actually cause the storm to intensify. This happened with Fiona, with the Canadian Hurricane Centre stating “Fiona re-intensified between Sable Island and the Eastern Shore of Nova Scotia.”

A satellite image of Fiona from Saturday. After becoming post-tropical the severe storm resembles a winter time nor’easter.”

The low-pressure reading of 932.7 mb at Hart Island, N.S. is expected to be the lowest recorded in Canadian history, with the previous record 940.2 mb in St. Anthony, N.L. The central pressure of a storm is notable as generally the lower it is the more intense the storm is. To give some context, stormier weather systems in Atlantic Canada generally have central pressures that fall towards and below 990 mb. Some of our most extreme weather events have central pressure that dip below 970 mb. Those include Hurricane Juan at 969 mb, White Juan 959 mb, and now Fiona at 932.7 mb. There are other factors that determine severity of a storm though, including size, duration, and track. 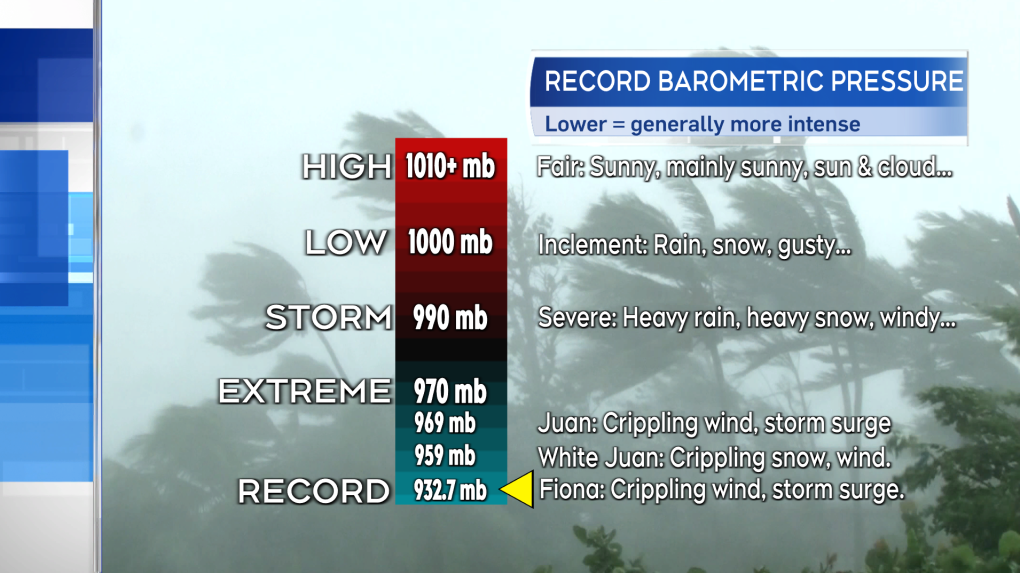 A chart illustrating the change in weather conditions with barometric pressure. Fiona setting a Canadian record for lowest.

Fiona hit with heavy rain, fierce wind, and a destructive storm surge. Both the most rain and highest peak winds were recorded in eastern areas of the Maritimes. The numbers don’t tell the full story though, as they do little to show the tree and structure damage, the coastal flooding and erosion. Erosion appears to be particularly significant on the northern coastline of P.E.I. and the North Shore of Nova Scotia. The community of Port-aux-Basque, N.L. was particularly devastated by storm surge. 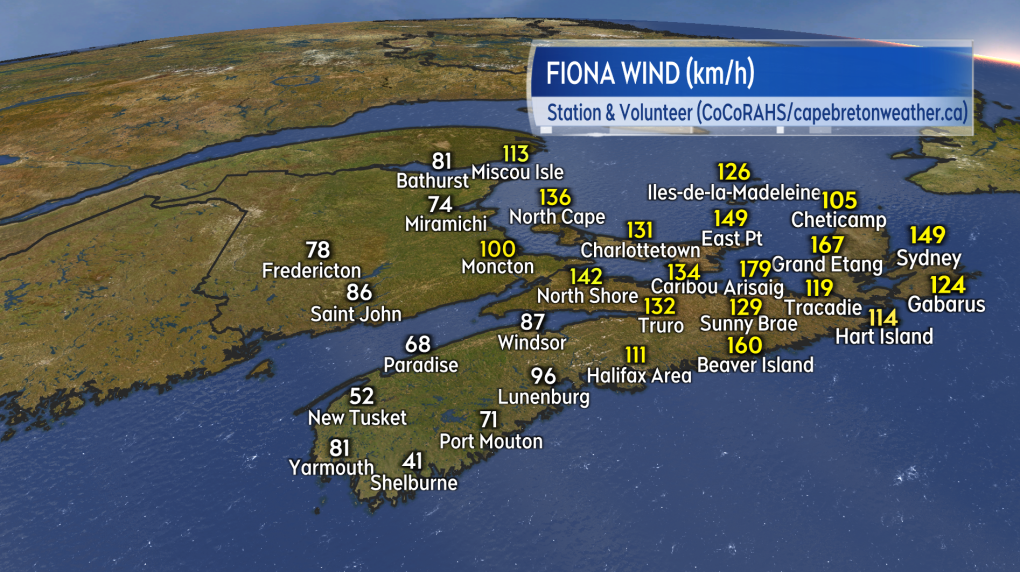 Peak wind reports in the Maritimes from Fiona. 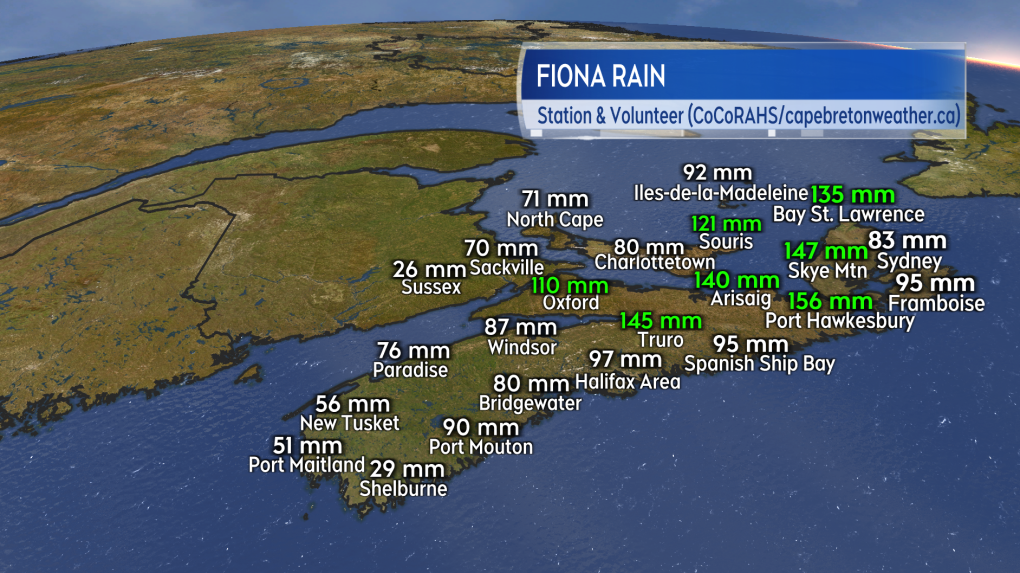 Rain total reports in the Maritimes from Fiona.

Category 1 Hurricane Ian continues to strengthen in the western Caribbean Sea. The storm is forecast to pass by western Cuba as a category 3 hurricane Tuesday morning. Ian is then expected to approach western Florida as a category 3 or 2 hurricane Thursday morning. After that, the storm is projected to be inland in the southeastern U.S. this weekend. 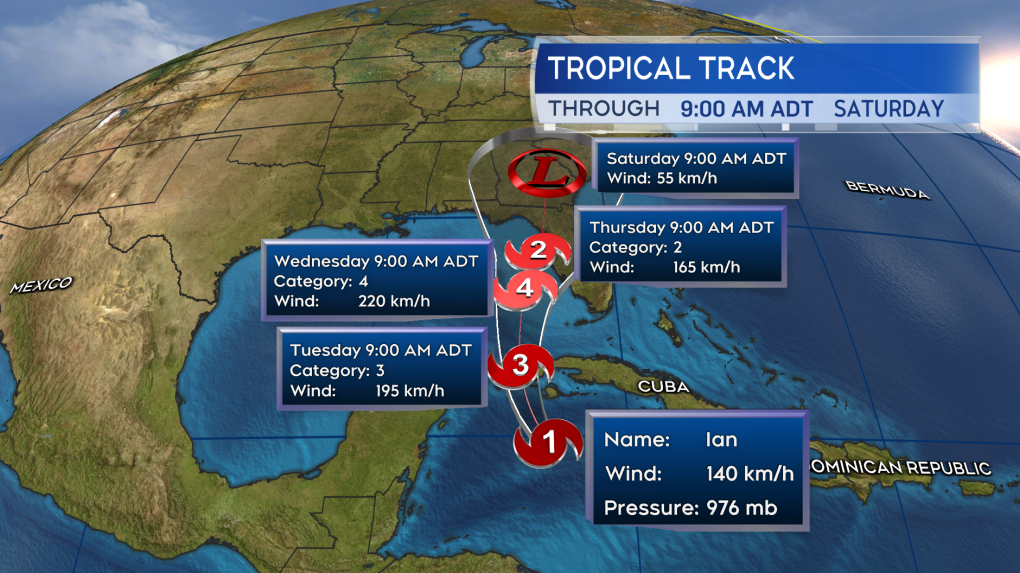 The forecast track for hurricane Ian as it spins in the western Caribbean Sea.