A weather front sprawling out of Ontario and Quebec is leading a low pressure system across the Maritimes Monday through Tuesday. Rain, drizzle and fog are expected in the region with some areas experiencing heavy rain for a period of time. 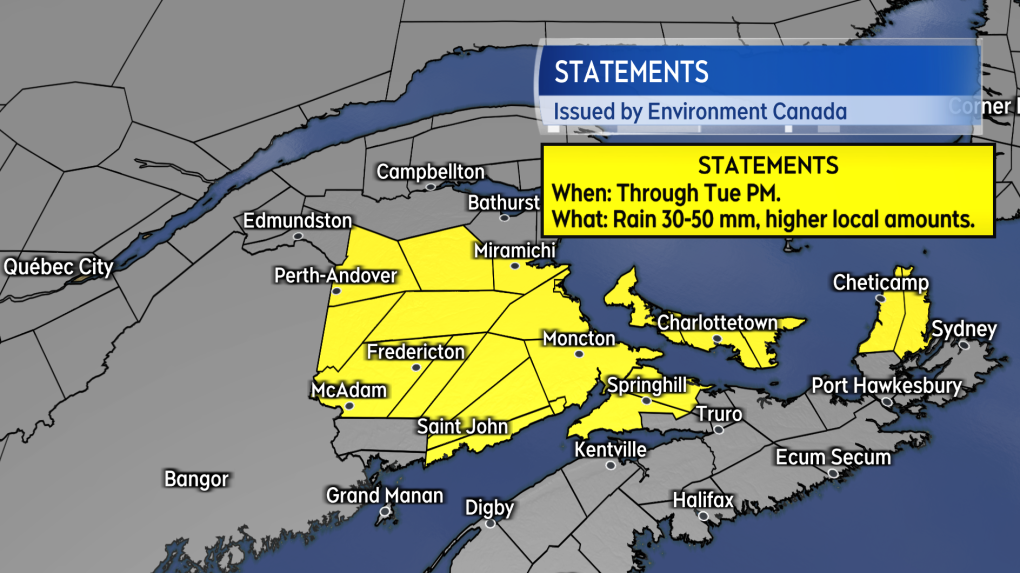 Rain and downpours are expected in a swath across the Maritimes tonight into Tuesday. Special Weather Statements issued by Environment Canada.

Special Weather Statements are in effect for much of New Brunswick, all of Prince Edward Island and into parts of northern and eastern Nova Scotia. The statements call for widespread rain totals by Tuesday afternoon of 30 to 50 millimetres, with higher amounts possible locally.

New Brunswick can expect the heaviest rain between midnight and 5 a.m., Prince Edward Island between 5 and 10 a.m. and Cape Breton between 9 a.m. and 2 p.m. on Tuesday.

After that, the heaviest rain will clear east of the Maritimes, with lingering scattered showers and patchy drizzle behind. Communities under alerts for higher rainfall amounts may want to check drainage on their property to ensure it is free of summer debris. Downpours could also reduce visibility and create hydroplaning conditions on the roads. 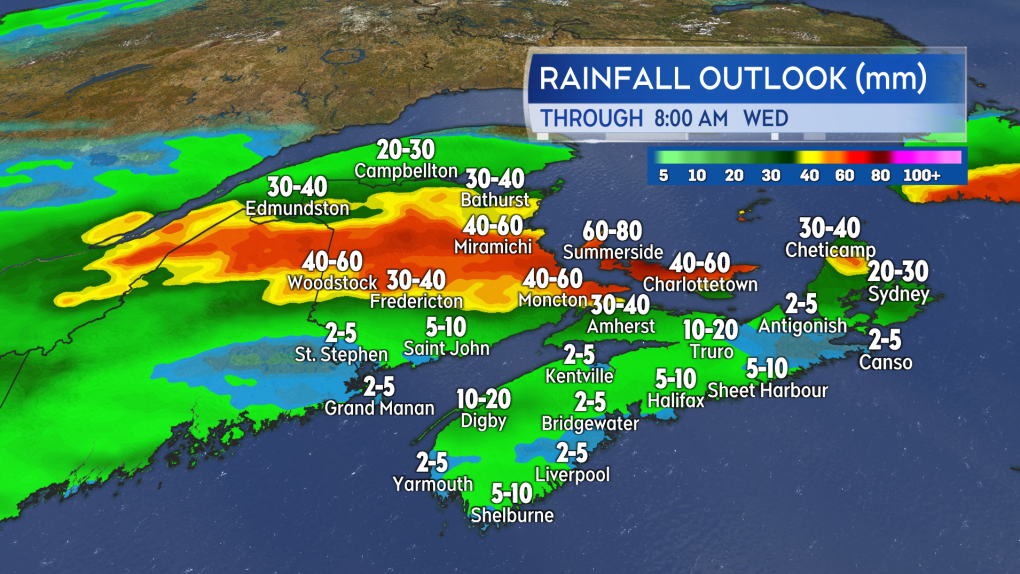 The most rain is expected through central New Brunswick, Prince Edward Island, and parts of northern and eastern Nova Scotia.

There is a significant wildfire burning in central Newfoundland. The area will catch some rain from the same system on Tuesday. At the current time, it is likely to range from 10 to 30 millimetres. A shift northward with the heavier rain from the system would increase those totals. 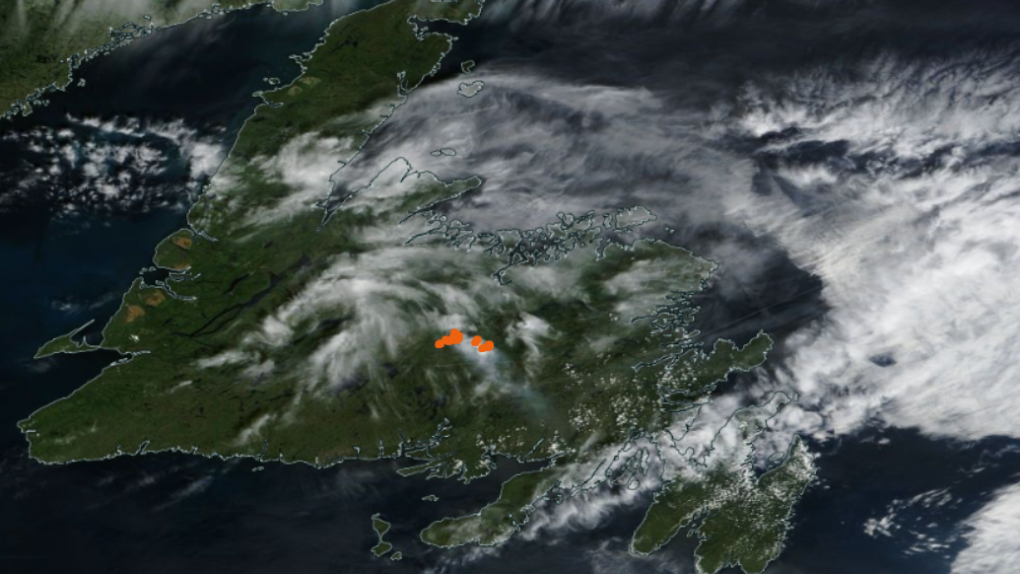 A NASA satellite image of Newfoundland from Saturday. The red dots indicating “thermal anomalies” which in this case are the position of wildfires.

The rain will be welcomed by many in the Maritimes. While a number of weather stations in the region posted near-to-above normal rain totals for the month of July, summer rain is notoriously hit-and-miss, as much of it is contributed by showers and thunderstorms. A good soak will help with lawns, gardens, wells, and the fire weather index. 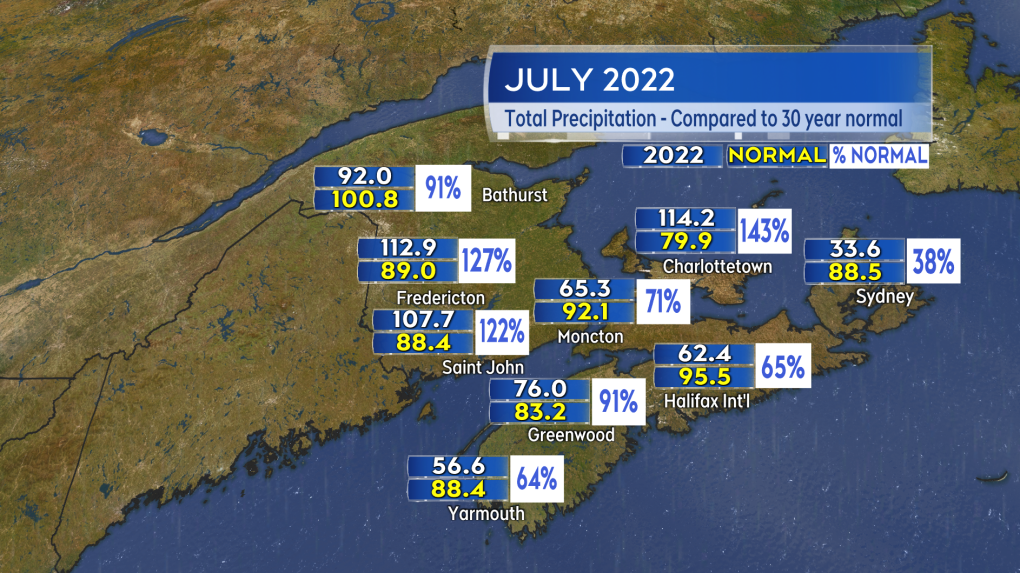 'We shouldn't have to push people': Most provinces have not made Sept. 30 a stat

While Canada prepares to honour the second annual National Day for Truth and Reconciliation on Friday, the majority of provinces have not followed the federal government's move to make it a statutory holiday for its workers.

23 people taken to hospital after workplace exposure to hydrochloric acid in St. Catharines

A total of 23 people have been taken to hospital in St. Catharines following a hazardous workplace incident on Tuesday.

Who is Pierre Poilievre's wife? What you should know about Anaida Poilievre

Becoming the leader of the Conservative Party of Canada earlier this month has not only raised Pierre Poilievre’s profile among the Canadian public, but has also brought additional attention of his wife. CTVNews.ca takes a look at what we know about Anaida Poilievre.

Can I book my COVID-19 bivalent booster that targets Omicron? Where each province, territory stands

Canadian employers are anticipating the highest salary increase in two decades as they try to balance inflationary pressures, surging interest rates, recession risks and a tight labour market, a new survey has found.