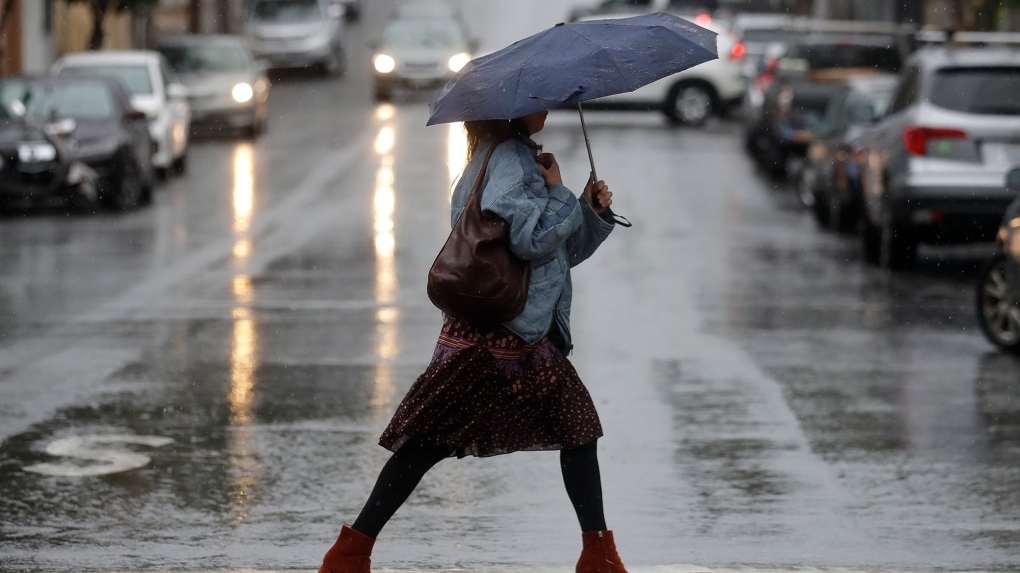 A woman walks in the rain in San Francisco in this file photo. (Jeff Chiu/AP)

HALIFAX -- After briefly weakening to a tropical depression while moving across the southeastern U.S. this past weekend, Claudette has regained tropical storm strength off the coastline of the Carolinas.

The storm is forecast to gain additional strength into Monday night as it moves north, with the maximum sustained winds near the core increasing to 75 km/h. 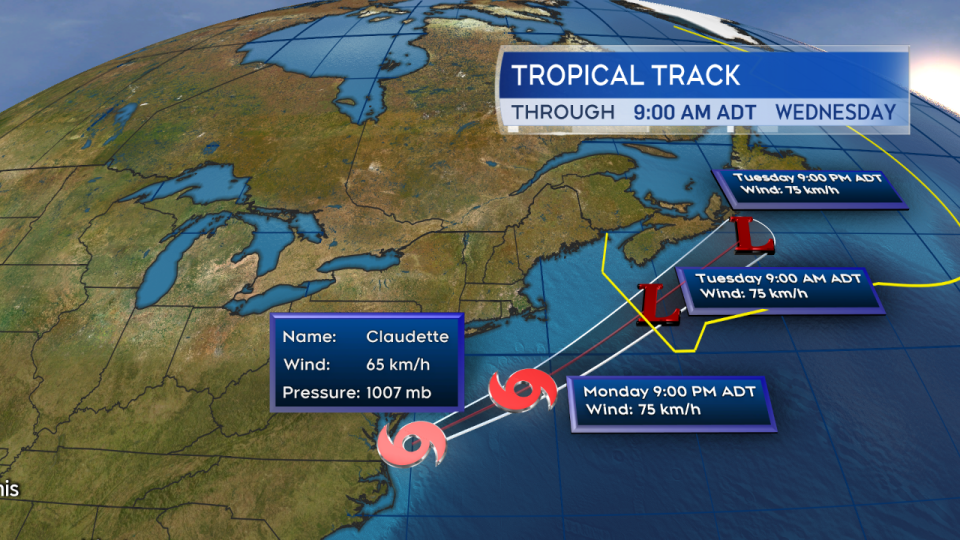 The forecast track for Tropical Storm Claudette for the National Hurricane Center in the United States.

On Tuesday, Claudette is forecast to enter the southern marine districts of Atlantic Canada while becoming post-tropical. The remnants of Claudette are then expected to be absorbed into a large cold front moving in from the west. 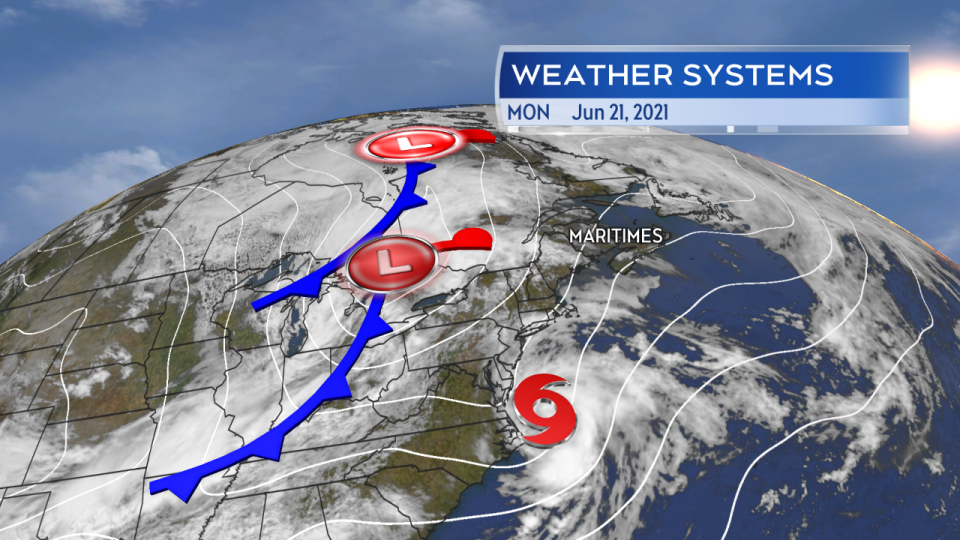 Post-tropical Claudette is expected to be absorbed by a large cold front moving eastward on Tuesday.

The additional moisture brought up from the south by Claudette will increase the risk of downpours in the rain forecast for the Maritimes Tuesday into Wednesday. The risk of downpours is highest Tuesday afternoon, evening, and night. While most guidance is showing general rainfall totals of 10 to 30 mm, downpours could push local amounts to 50+ mm. Downpours can reduce visibility on the roads, create hydroplaning conditions, and ponding water. 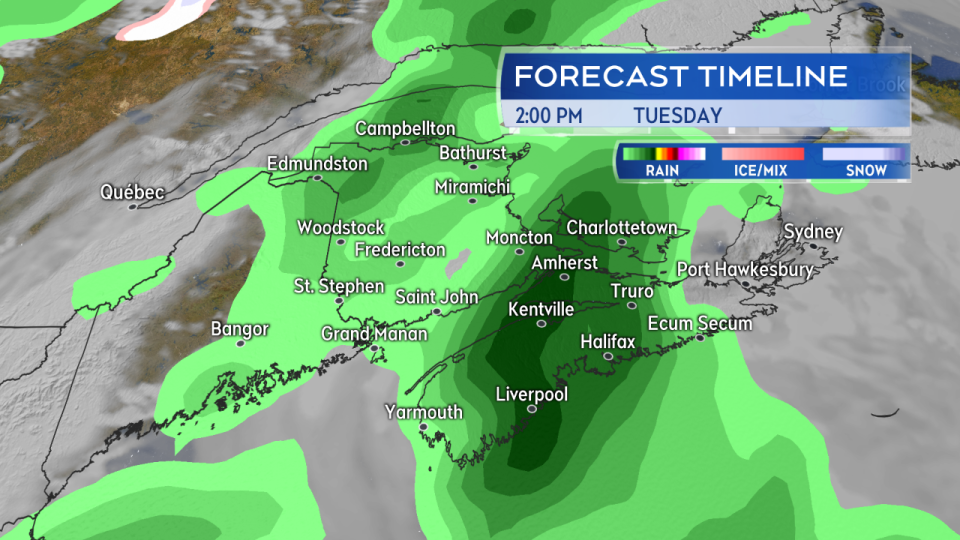 The combination of weather systems brings a risk of downpours to the Maritimes on Tuesday.

The Canadian Hurricane Centre has issued a tropical cyclone statement for the Atlantic coastline of Nova Scotia (cyclone, in this case, referring to the entire family of tropical depressions, tropical storms, and hurricanes). Along with the risk of heavy rain, they note that gusty winds are possible Tuesday but that they are expected to remain below the warning criteria of gusts reaching 90+ km/h. 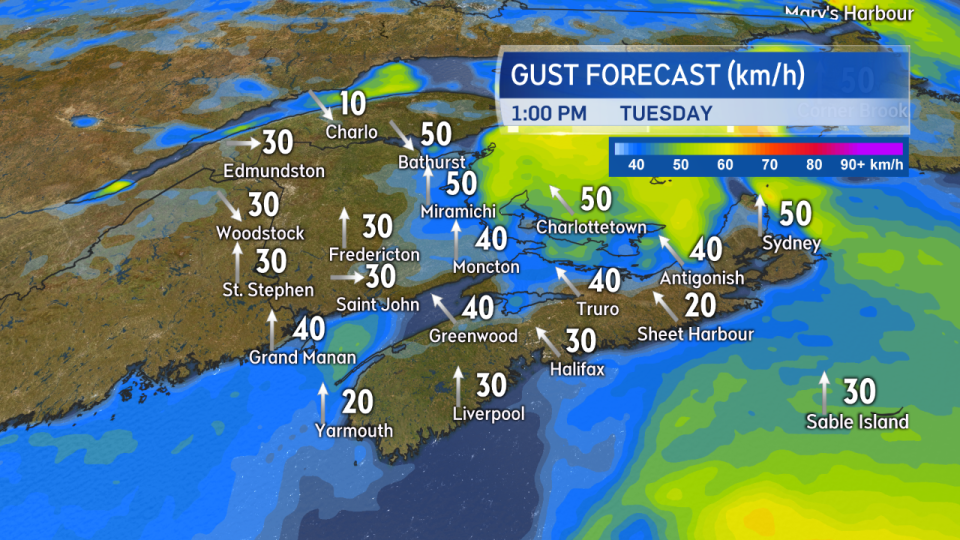 Wind is forecast to be gusty on Tuesday but below the warning criteria of gusts reaching 90+ km/h.

The Canadian Hurricane Centre will have an update on their statement at 3 p.m. ADT and the National Hurricane Center in the U.S. an update for the official forecast track & strength of Claudette at 6 p.m. ADT.

You can join me on CTV Atlantic News 5, 6, and 11:30 p.m. for the latest forecast track and any impact to our weather Claudette may have.