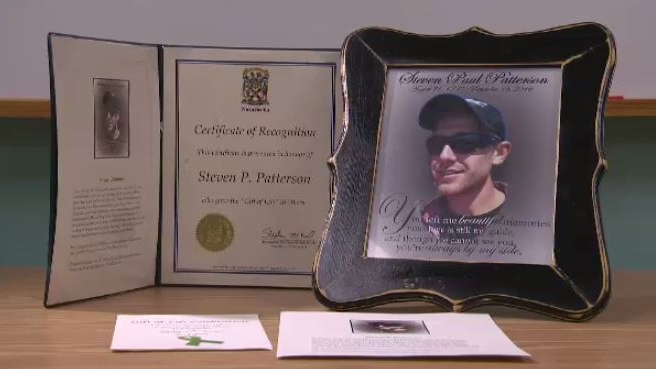 National Organ and Tissue Donation Awareness Week is dedicated to sharing stories and drawing attention to the benefits of donation and lifesaving effects of transplantation.

National Organ and Tissue Donation Awareness Week is dedicated to sharing stories and drawing attention to the benefits of donation and lifesaving effects of transplantation.

The ‘Legacy of Life’ program at the Queen Elizabeth II Health Sciences Centre is doing exactly that while educating potential donors along the way.

“My 26-year-old son had a car accident on September 4th,” says mother Kelly Patterson. “We were in the hospital for 11 days and he passed away on September 15th, 2016.”

The decision was made to donate her son, Steven’s, organs.

His organs helped five different people, including one man who sent a letter to the Patterson family, thanking them for the kidney he received.

The letter found its way to Patterson through The Legacy of Life: Nova Scotia Organ and Tissue Donation Program at the QEII Health Sciences Centre.

“At any given time there’s between roughly 250 to 300 people in Atlantic Canada who are awaiting a transplant,” says Dr. Stephen Beed.

Dr. Beed is the Legacy of Life’s medical advisor, and just one of the members of the collaborative team.

The program aims to make a difference in the lives of thousands of Canadians currently waiting for organ transplants, and spread awareness and education.

Dr. Beed says most people can be a donor.

“Except for certain things like an obvious cancer, or an overwhelming infection, there’s not many absolute contraindications,” explains Dr. Beed.

Donors are needed for procedures both routine and lifesaving.

“Sometimes with our severely burned patients who need skin,” he adds, “there’s cornea transplantation occurring at the VG giving people back their sight, there’s some children and adults receiving heart valves.”

Dr. Beed says anybody in Nova Scotia can indicate their intent to be an organ donor on their MSI card, but it’s more than just checking off a box.

“They really need to make sure their family knows, their circle is aware of the fact that that’s what their wish would be.”

For Kelly Patterson, the act of generosity was a lone positive in an otherwise horrible situation.

“We didn’t just help the recipients, we helped the recipient’s family, friends, wives, sisters, brothers, husbands, grandchildren and friends,” says Patterson. “So it helps me get through my day when I can think of them when I think of Steven.”