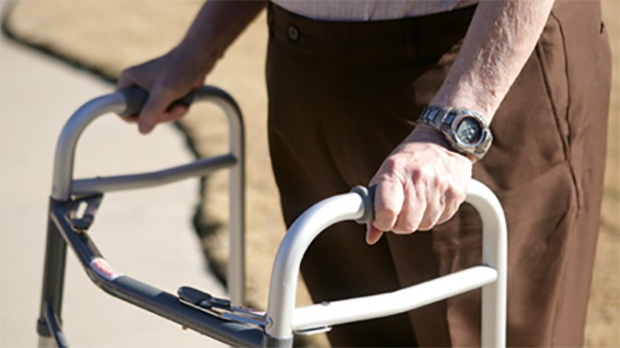 A senior citizen uses a walker in this file photo.

HALIFAX -- New data show some Nova Scotia patients are languishing in hospital for a year or more waiting for a spot in a nursing home, clogging up the province's hospitals, the NDP says.

The party released figures from the Nova Scotia Health Authority in the legislature Wednesday, indicating 2,281 people waited in hospital for placement in long-term care between 2012 and 2017.

The documents, obtained in a freedom-of-information request, show the hospital waits during that period lasted anywhere from 91 to 365 days, while 123 people waited in hospital beds for more than a year.

"Over the last five years 718,230 bed days in our hospitals were used for people who were not hospital patients at all, but were waiting for placement in a nursing home," NDP Leader Gary Burrill told the legislature.

"The obvious result is a shortage of available acute care spaces."

Burrill asked Premier Stephen McNeil whether there are any plans to build new nursing home beds, pointing out the previous NDP government had plans for an additional 348 long-term care beds but the governing Liberals haven't created any since coming to power in 2013.

McNeil sidestepped the issue, saying the government believes continued investment in home care is needed to allow people to stay in their homes.

"Which is why we have continued to invest in every budget since we've come into power in home care ... and we will continue to work to ensure that we provide a myriad of options when it comes to long term care and end-of-life care," he told reporters.

McNeil said the government has made progress on the wait list, reducing it from 2,500 when it took office to its current level of around 1,000, although he admitted the number is still too high.

The NDP figures indicate 1,128 people are currently waiting for a nursing home bed.

"Where there's a requirement and if long-term care beds is the solution then we will continue to work with our partners to provide those," McNeil said. "But we have heard very loud and clear from people that they want to stay home as long as possible."

Burrill said he believes a refusal to provide more long-term care beds while increasing the emphasis on home care is "a huge mistake."

"Home care of course is a wonderful thing but it is not the complete story all the time. There are times in many people's lives when long-term care is required."

The data released by the NDP said that 1,877 people had died over the last five years while waiting for long-term care.