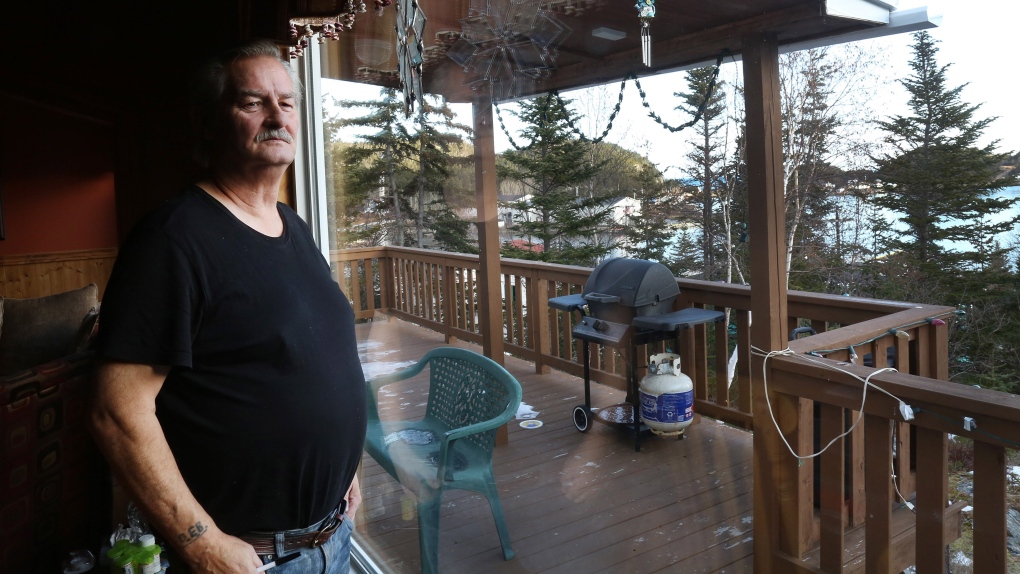 Former town councillor Dennis Budgell, who initiated the resettlement talks, looks out of his window at home in Little Bay Islands, N.L. on Friday, November 15, 2019. Little Bay Islanders are saying goodbye as the Newfoundland and Labrador town resettles, but some are eyeing a return. (THE CANADIAN PRESS/Paul Daly)

LITTLE BAY ISLANDS, N.L. -- On a clear Friday morning in mid-November, the MV Hazel McIsaac is packed with a gaggle of chatting passengers. U-Hauls and pick-up trucks are parked on the ferry's bottom deck, waiting to make the crossing to Little Bay Islands. Ten years after talk of relocation first started in the Newfoundland island community, it's finally about to happen.

Street lights will go out, the daily ferry will stop running and other services will be cut off as of Jan. 1, less than a year after the town's 55 permanent residents voted to accept money from the provincial government to shut down the town.

The ferry is running full out in the last few weeks, carting Little Bay Islanders back and forth. Some are preparing to move, while others who left years ago are coming home to say goodbye. First-time guests have also been rolling through the town, seizing their last chance to tour the once-bustling community on Notre Dame Bay on the island's northeastern coast.

Levor is locking up his ATV and other treasures in his shed, preparing to head back to his home state of Florida for the winter. But he's not happy about it.

"It's gonna go down in history as a big blunder by the government," he says.

The Floridian married a Newfoundlander and has been spending half the year here with his family since the town was "booming" in the 1980s. Levor doesn't beat around the bush when asked to share thoughts on the government's relocation policy. He resents that the promise of money -- between $250,000 and $270,000 per permanent household -- drove a wedge between people and left seasonal property owners like himself unable to sell for a profit.

But he's still keen to return, and resists labelling the town as "dying."

"We're going to do everything we can so this doesn't go to ruin," he says.

Like many rural Newfoundland coastal communities, or outports, Little Bay Islands was hit hard by the 1992 cod moratorium. A crab-processing plant kept jobs in the town for a little longer until that too closed in 2010. Working-age people trickled out, leaving mostly retirees living in the town year-round.

Amy Glavine says she fell in love with the place the second she arrived to start her summer job two decades ago. She now owns a house a few doors down from the crab plant where she met her common-law husband Wayne Grimes.

On a short break from packing, the couple walk down to the dock by the now-collapsing plant where they first met, reflecting on happy summers there. Glavine says she'd stay in Little Bay Islands all year, but the couple live about 90 minutes away in Springdale so their young son can attend school.

They hope to return in future summers, though there are logistics to work out, including purchasing a boat and outfitting the house to run off-grid.

Grimes, who grew up in Little Bay Islands playing sports, attending school and later working side-by-side with his grandmother at the plant, says the process hurts, but he doesn't think relocation will be the end of his hometown.

"There's always going to be people who want to come back," he says.

Community resettlement programs carry heavy baggage in Newfoundland and Labrador. The practice peaked in the 1950s and '60s, when more than 150 villages emptied out as people left the only homes they'd ever known for larger centres.

The province has since opted for a gentler term, "relocation," to describe the current policy. A town asks the government to calculate if it would cost more to keep services running or to pay homeowners to leave. If the math works out in favour of relocation, a vote decides whether the process will go ahead.

Little Bay Islands will be the eighth community to relocate since 2000, but its story has attracted national and international media attention because for years, residents couldn't agree on whether to stay or go. A 2016 vote fell just shy of the required 90 per cent consensus, with some complaining at the time that residents were being "held hostage" by a few dissenters.

Years went by and people continued to leave Little Bay Islands. Yolande Pottie-Sherman, a professor at Memorial University of Newfoundland who has studied the relocation program, says the policy's slow, uncertain nature has a degrading effect on morale, as people lose interest in community groups and it becomes harder to sell property.

In February, 100 per cent of the town's remaining permanent residents voted to relocate.

But unlike in previous cases, the people of Little Bay Islands will retain ownership of their properties. Municipal Affairs Minister Derrick Bragg says it's a fair alternative to the government assuming liability for dozens of empty homes and other infrastructure.

"I don't know how we would dispose of it, to be honest," Bragg said in an interview. "If people want to use that as a summer cottage or the seasonal retreat, why not let them use it?"

Throughout the town, window signs now declare "private property," warning would-be looters that owners are planning a return. People are boarding up windows and doors and assembling wharves by waterfront properties to accommodate small boats.

But not everyone is packing up.

Mike and Georgina Parsons have become Little Bay Islands' most famous residents through their Facebook blog, where they write about their decision to live in the town year-round. Mike, 53, says it's been a lifelong dream to live somewhere he can unplug and be close to nature. As it turned out, the opportunity came to him.

"It's kind of bittersweet," he says. "We're sad about all this, but we're also kind of excited about this next phase for us, being here, living off the grid."

The Parsons are installing a solar panel and have wireless internet set up so Georgina can continue her accounting work. Nearby towns are a boat trip away if they need to make a run for supplies or visit friends. Otherwise, Mike says, "All of the things that we love to do, we can do from here."

Dennis Budgell, a former town councillor who first raised the idea of relocation, acknowledges he's taken criticism from neighbours over his role in the saga. He hasn't been fazed by the harsh words, but he has some regrets as he faces the looming reality of leaving home.

"In hindsight, I think I wouldn't have done it," Budgell said from his house overlooking the town harbour. "You're leaving behind everything you've ever done."

The resident of 48 years is dreading his December move to Springdale but swears he'll be back for the summer to enjoy the solitude and proximity to water.

Budgell doesn't have any major plans for his relocation cheque. He'll leave most to his daughter and grandson, he says, but he's set aside enough to make his way back to Little Bay Islands.

"The only thing I took was enough money to buy a speedboat," he said.