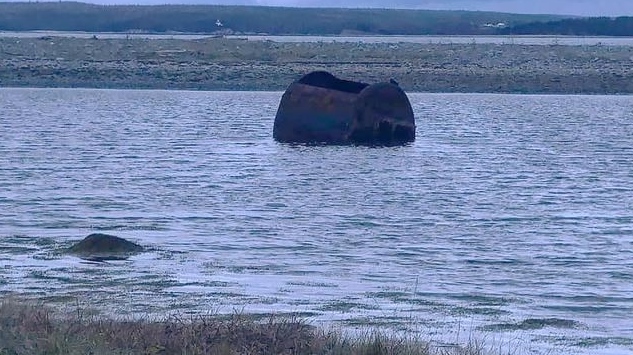 Residents of Drum Head, N.S. - a small town 250 kilometres east of Halifax - are fighting to prevent the removal of a hunk of black metal that has been sitting offshore for the past 100 years.

HALIFAX -- Residents of a small town 250 kilometres east of Halifax are fighting to prevent the removal of a hunk of black metal that has been sitting offshore for the past 100 years.

"It's just a big, rusty boiler," Rachel Langley, resident of Drum Head, N.S., said in an interview Monday. "Maybe it is an eyesore, but it means something."

The boiler is an important feature of life in the community of 37 people, Langley said, adding that for years, the metal has been a point of interest for divers and fishers.

The boiler is the last remaining piece of the Scotia, a steam-powered vessel that was destroyed by fire in 1921, damaging cargo worth $75,000 at the time.

Langley said in an interview Monday she's set up a Facebook group named "Save the Drumhead Boiler" as well as a Change.org petition after hearing the province is planning to pluck it from the water.

The boiler was tagged in February to be taken from its resting place by Nova Scotia Lands, the provincial Crown corporation that oversees environmental cleanups and land management.

Langley said her efforts to save the boiler have resonated past the small community, and as of Monday afternoon, her petition had more than 300 signatures and the Facebook page had slightly fewer than 100 followers.

"It's not in any (shipping) channels, any boat ways, it's not in the way at all," Langley said of the boiler. "It's going to cause more damage to move it than it would be to leave it."

Nova Scotia Lands spokeswoman Trish Smith said in an emailed statement the removal is scheduled for the summer. She said there are "no glaring impacts" to the environment for the boiler to be removed.

"Contractors hired to remove vessels follow all permits and guidance from provincial and federal regulators on any of our removal sites," Smith said.

Smith added that vessels that were considered for removal had been brought to the attention of the provincial Lands and Forestry Department via complaints from people who have concerns about such things as safety and esthetics.

Langley, however, said she hasn't been able to find out who launched a complaint against the rusty chunk of metal.

Another Drum Head resident, Martin Theobald, said in an interview Monday community members are attached to the boiler.

"It's a nice piece of living history within reach," Theobald said. "It's kind of a big part of local history. (It) ties into the nautical stories of the area."

Theobald owns Harbour Island, which sits less than a kilometre off Drum Head. He said the boiler rests just between the mainland and the island and both are visited in the warmer months by locals.

"From my perspective, I don't see a reason for a big company disturbing all that area just to remove something that's been there for ages," he said.