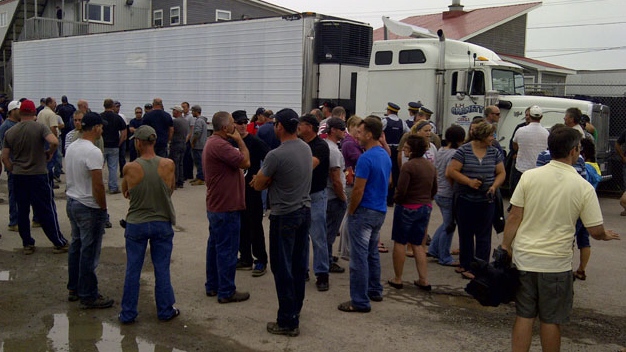 New Brunswick lobster fishermen and processors met in Fredericton Friday in an effort to resolve a dispute over the purchase of U.S. lobster.

Fisheries Minister Michael Olscamp mediated today’s talks and helped the two sides to agree on a base price of $2.50 for canners and $3 for banded market lobsters.

“It’s important to add…we are in negotiations with government officials…and we will negotiate to see what is possible as an add-on to compensate fish harvesters so we can enable them to get through this season,” says Christian Brun, executive secretary of the Maritime Fisherman’s Union.

“Unfortunately we’re in a global economy that’s slowing down and the pricing should be better, but it is what it is and we’re doing the best we can,” says lobster processor Norm LeBlanc.

The fishermen claim processors told brokers not to buy local lobster when the season opens next week because prices are lower in the U.S.

The protest started Thursday morning at a processing plant in Cap-Pelé, but then shifted to Shediac after demonstrators received a tip that a U.S. truck carrying more than $200,000 worth of lobster had been diverted to Shediac in an attempt to avoid the blockade.

“We don’t want to do this but nobody knows what else to do,” said lobster fisher Debbie Thompson at yesterday’s demonstration. “We all feel like we’re backed into a corner.”

Police escorted the truck out of the blockade Thursday afternoon, but one of the protesters followed the vehicle to ensure it wasn’t headed for another local processing plant.

The Maritime Fisherman’s Union is calling for an end to the protests and blockades and there was a strong police presence at the plant in Shediac today.

With files from CTV Atlantic's David Bell and Andy Campbell