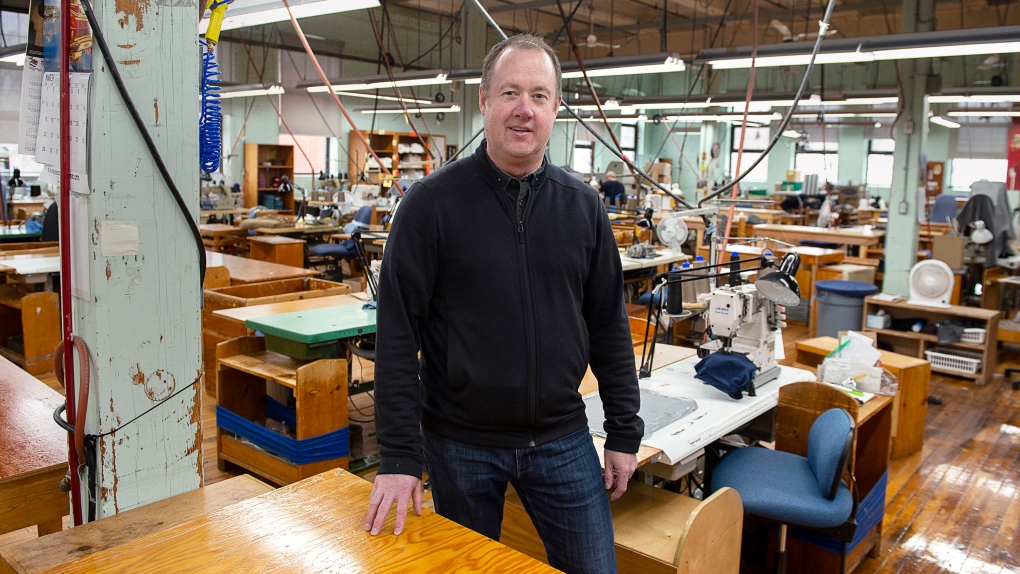 Jon Stanfield, president and CEO of Stanfield's Ltd., stands in one of the production areas of the garment manufacturing company in Truro, N.S. on Tuesday, March 31, 2020. (THE CANADIAN PRESS/Andrew Vaughan)

HALIFAX -- A historic Canadian undergarment factory famed for long johns and boxer shorts is about to rapidly reinvent itself as a domestic producer of medical gowns.

Jon Stanfield, the chief executive of the fifth-generation family firm, said in an interview he's already sourced approved fabric from nearby Intertape Polymer, and is ready to be producing medical clothing within days.

The 48-year-old says once the federal government provides details of its offer, the company could bring back over 75 of its over 200 staff who were sent home earlier this month as a result of the COVID-19 pandemic.

He describes the restart as a "pivotal" signal that Western governments are moving to ensure there are domestic suppliers of medical gear and gowns crucial to public safety in the future.

Stanfield said the firm has patterns and machinery that would initially produce more than 2,000 gowns daily per shift to help feed a Canadian demand for garments that emerged after the pandemic sliced supply from China.

The businessman -- the grand nephew of the late federal Tory leader Robert Stanfield -- said he's being driven by a sense of mission akin to the sudden demands created by wars and shifts in the Canadian economy.

In the 1890s, the company invented shrink-proof heavy woolen underwear used by workers during the Klondike gold rush; in the First World War, the factory was converted to provide wool blankets to keep soldiers warm in the trenches; and in Second World War, it supplied base layers of underclothing.

Innovation and survival is part of his firm's history, said Stanfield, adding, "my forefathers ... invented the long john."

Stanfield said he plans to provide some gowns through the company's overseas supply chain, but also intends to re-establish a Canadian domestic supply that free trade and offshore production have almost wiped out.

"Isolation gowns, reusable and disposable, are made in China, so to build a small resource base in Canada is important to dealing with crises like this in the future," he said.

"You can't have your supply chain be permitted to suddenly fall to zero like this."

His firm has factories in China supplying masks, but the company saw a reduction of supply during the initial outbreak in the city of Wuhan.

Laverdure said in the past few days the supply of masks has been flowing again, but Ottawa has signed an agreement with his company to create a Canadian-based factory and supply face masks to health agencies.

Laverdure said several Western governments his firm is dealing with, including France and Canada, are now looking for his company to produce the mask on their soil.

"They want to have control of such a critical item for their health-care system," he said in an interview.

Stanfield said he hasn't been informed yet how large a contract is going to be offered to gown producers under the federal procurement program, but he expects it will be in the millions of dollars.

He expects the details will be worked out and emerge in the days to come.

"We're ... going to be supporting our people in the front-line defence against COVID-19 with creativity and innovation," he said.

This report by The Canadian Press was first published March 31, 2020.