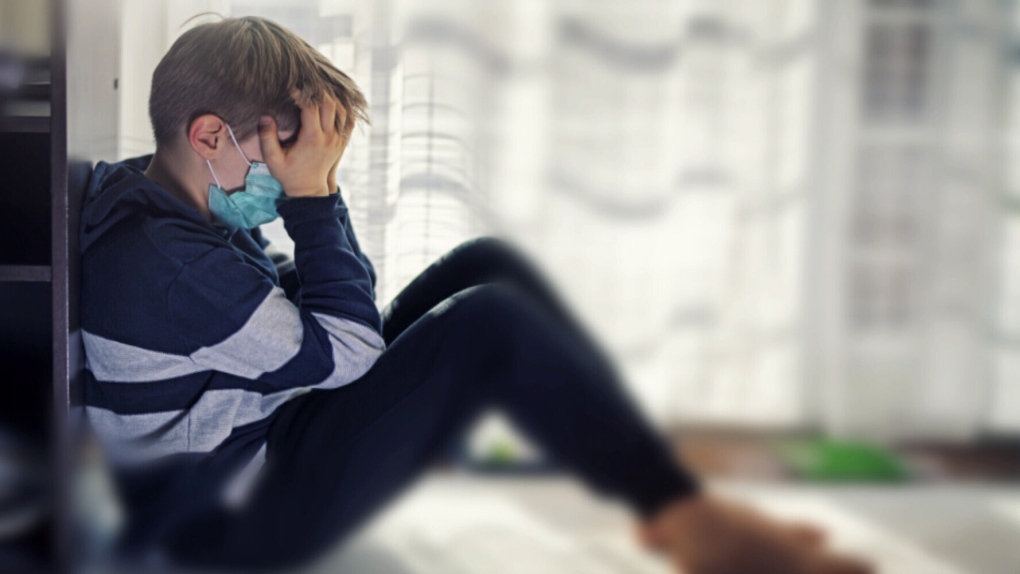 A child is seen holding their face in this file photo.

New Brunswick's child and youth advocate says, although the province has increased funding and training for mental health services in the past year, its long-term plan is "still too vague."

Kelly Lamrock's finding was included in his office’s first update on the New Brunswick government's implementation of recommendations from the Youth Suicide Prevention and Mental Health Services Review.

Under the Child, Youth and Seniors' Advocate Act, Lamrock had asked the Department of Health to provide a progress response on recommendations from recent reports. According to a news release from the province Monday, this was part of a new recommendation monitoring process, which Lamrock intends to use to hold executive brand of government accountable.

“Often reports get released, discussed, and forgotten,” said Lamrock. “It is our intention to make sure that we advise the legislative assembly and the public what government is and is not doing to follow up on reports from the advocate’s office.”

The first focus was set on tracking recommendations from The Best We Have to Offer, No Child Left Behind and A Matter of Life and Death -- three reports covering youth mental health services to provide guidance for suicide prevention, detection, treatment, and compassionate urgent response.

“We know that the system failed young Lexi Daken,” said Lamrock. “We approached this update with one key question in mind – would the outcome be different today? We want to see signs that people with power have acted with urgency and learned from the past.”

Lexi Daken was suicidal when she went to the emergency room at Fredericton’s Dr. Everett Chalmers Hospital on Feb. 18, 2021. The 16-year-old waited in hospital for eight hours to see a psychiatrist but instead left the hospital with a referral. She died by suicide six days later.

Lamrock identified three themes to categorize recommendations in the reports from the Youth Suicide Prevention and Mental Health Services Review. Those are:

In reviewing those areas, the advocate found progress was made in increasing the funding and human resources in the mental health sector, providing better training and knowledge transfer processes for urgent care, and providing preliminary funding in needed areas, such as social pediatrics, FASD research, and walk-in mental health services.

“As one young person said, there needs to be something between sitting at home and going to the emergency room. To get there requires not only more funding and goodwill. It takes a long-term plan with long-term funding and clear objectives,” Lamrock said. “A pilot project without a plan is just a placebo. Services in one First Nation are only an adequate response if there is a plan for all 15 First Nations. Blaming staff shortages is only acceptable if you have clear numbers and a plan to train those people. Funding a community program is only effective if they have a long-term role and secure funding."

Lamrock adds there has been some ideas put forward, but says now it's time to see sustained interest and leadership that turns an idea into a system. He says he will expect to see that in his next interim report.

Lamrock said he will issue a second progress report in 2023 and set out the following expectations of government:

Lamrock said signs of improvement to Integrated Service Delivery (ISD) showed commitment from the government through the amendment of the Child and Youth Well-Being Act. He urged the government to adopt the practice of assessing, opening a file and completing an ISD plan for every child or youth treated for emergency mental health services or who has shown signs of suicide ideation.

He says he has opened an investigation into training and recruitment of mental health professionals and funding for programs through the Department of Post-Secondary Education, Training and Labour. He further urged the government to ensure that the surplus addresses the current issues in emergency services.

Lamrock also cited the need for the federal government to act quickly in providing funds to provinces to address the emergency room crisis.

“Accountability is fine, but the federal government does not need a study to know that the system is straining,” said Lamrock. “Bob Dylan famously said that you don’t need to be a meteorologist to know which way the wind is blowing. Similarly, we do not need studies to know that our emergency rooms are in crisis.”

Lamrock says he plans to report back to the legislative assembly in about eight months.

Dozens of Muslim philanthropic groups and several civil liberty organizations are urging Prime Minister Justin Trudeau to ensure that the Taxpayers’ Ombudsman office can access all the information it needs to conduct a systemic review of how the Canada Revenue Agency treats and audits Muslim-led charities, after a 2021 report accused the CRA of 'implicit biases and practices.'

Three Liberal ministers have declined invitations to testify at the Senate as the upper chamber probes why Canada still won't allow humanitarian workers to help in Afghanistan.

Can Ukraine pay for war without wrecking its economy?

Even as Ukraine celebrates recent battlefield victories, its government faces a looming challenge on the financial front: how to pay the enormous cost of the war effort without triggering out-of-control price spikes for ordinary people or piling up debt that could hamper postwar reconstruction.

Welcome to the knockout rounds of the World Cup as the final 16 teams vie for soccer’s most coveted trophy. Netherlands, USA, Argentina and Australia all face elimination if they don’t win. CTVNews.ca takes a look at everything you need to know on Day 14 of the tournament.

The body of a man has been recovered following an industrial accident in Mississauga on Friday, Peel Regional Police say.