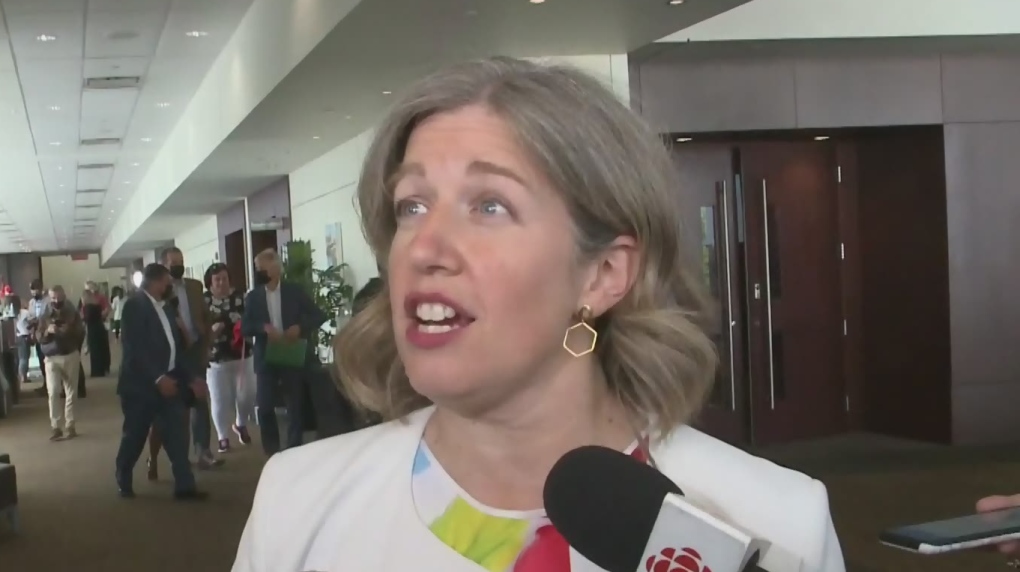 One of the longest serving MLA’s currently in the New Brunswick legislature says he was the one to offer new Liberal leader Susan Holt his seat should she choose to run in a by-election before the next provincial election.

Denis Landry says he spoke briefly to Holt after her leadership win in Fredericton on Saturday. While he was supporting candidate T.J. Harvey, he said he’s happy to work with Holt.

“The people are never wrong. I’m going to support her, and while congratulating her, I just hugged her and I said, ‘Well if you need a seat in the legislature, mine will be free for you,’” he said. “That’s what I offered her.”

Holt had confirmed when speaking to reporters that at least “a couple” of MLAs already approached her to “offer up an opportunity for a by-election.”

“I think right now, I’d like to take a minute to focus on the party and go out and really engage with all the volunteers and start the rebuild process with staff at the NBLA and with who our party is going to become,” she said.

Landry was first elected in 1995, lost in 1999, but was re-elected in 2003 and has served as an MLA ever since, currently representing the riding of Bathurst East-Nepisiguit-Saint-Isidore.

Landry said he’s had time to think about stepping aside, and will be turning 65 in the fall.

“I think for me, it’s pretty much the time to leave. I mean, I still have two years to go, but the thing is, if she asked me for the seat, it’s available for her,” he said. “Anytime within the next two years.”

St. Thomas University political scientist Jamie Gillies says it would make sense for Holt to take advantage of the offer.

“That would be good news for Holt and the party to have their leader in the legislature prior to the next election,” he said. “I think it's needed, I think it's really important, and so if Denis Landry has already suggested that, I think that is something that I think Holt and the the leadership team with the Liberals should really consider.”

Reaction to Holt’s win has been mostly positive, including from other political parties.

In a statement to CTV News, Premier Blaine Higgs highlighted the history being made as Holt becomes the first woman elected as leader of their party.

"Congratulations to Susan Holt on her successful campaign for leader of the Liberal party. She has made history being the first woman elected leader of the party. I believe in doing politics differently and I’m pleased to hear Susan Holt say she feels the same. I’m hopeful we can find common ground on which to work together for the best interest of New Brunswick," said Higgs.

Green party leader David Coon posted his congratulations on social media. Coon won against Holt in the 2018 provincial election in the riding of Fredericton South.

Roger Melanson, who has been the interim Liberal leader since Sept. 2020, said Holt is bringing hope to the party.

Gillies agrees this could be a fresh start for the party – and for provincial politics.

“I think the Liberal party of New Brunswick is ready to stop giving leadership to sort of young lawyers and your kind of typical liberal politician and give somebody with both, maybe a technical business and progressive sense a chance. I think Susan Holt pitched that message to Liberal voters really well in this leadership election.”

But he says the party will need to focus on making an impression on voters in the southern region of the province.

“They’ve got to look at, at least, ten or so ridings that they’ve got to flip back and at least a couple in the capital region, maybe Saint John Harbour…they’ve got to actually start expanding the map,” he said. “One thing they really should consider, T.J. Harvey ran a very strong campaign, they’ve got to have him run in the next election.”

With a death toll nearing three dozen, rescuers searched on Saturday for survivors among the Florida homes ruined by Hurricane Ian, while authorities in South Carolina began assessing damage from the powerful storm's strike there as stunned residents began the painstaking task of surveying their losses.

How Canada's empty offices could get a second chance

Offices in Canada still haven't returned to their pre-pandemic occupancy rates, and now a growing number of underused buildings are being converted into apartments and condominiums. CTVNews.ca takes a look at this trend.