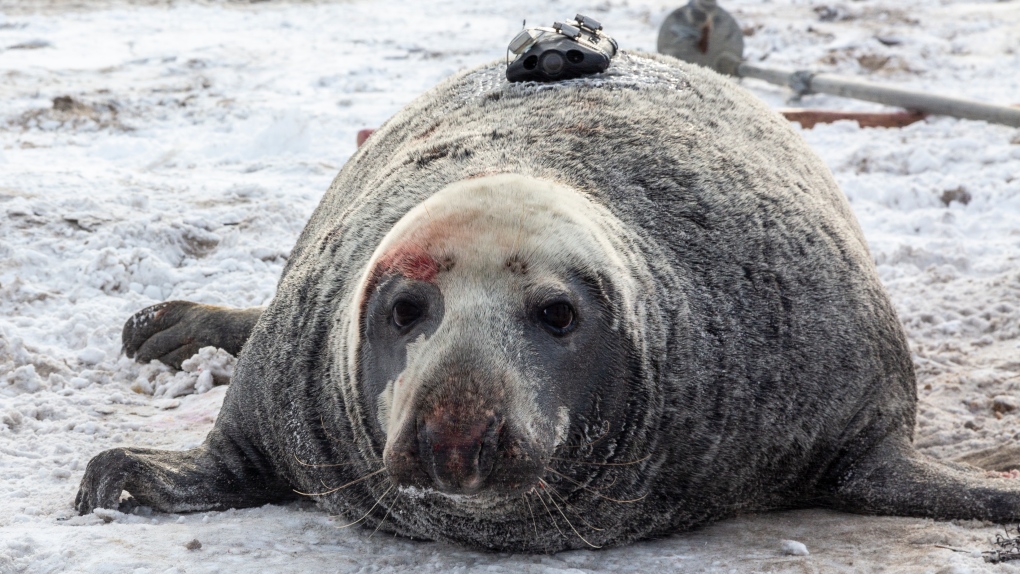 When Department of Fisheries and Oceans biologist Damina Lidgard first attached a camera to the back of a young gray seal, as shown in this handout image, on Sable Island, N.S. in 2017, he thought it wouldn’t be long before he was able to retrieve the device and review the data. (THE CANADIAN PRESS/HO-Damian Lidgard)
HALIFAX -

When Department of Fisheries and Oceans biologist Damian Lidgard first attached a camera to the back of a young grey seal on Sable Island, N.S., in 2017, he thought it wouldn't be long before he would be able to retrieve the device and review the data.

Instead, it was nearly three and a half years before he heard any word of the camera at all.

"What we normally do is put a satellite transmitter on any animal that we deploy instruments on. In this case, we didn't, because we expected this (camera) just to be gone at sea for a couple of days," said Lidgard in an interview Friday.

"With hindsight, probably not a good idea," he added with a laugh.

Lidgard said he first deployed the $10,000 camera on Dec. 31, 2017, on Sable Island, about 300 kilometres southeast of Halifax. Usually, cameras are attached to seals that the researchers are familiar with and that are likely to return to the Island.

The male seal, however, was unknown to researchers and was an ideal candidate for testing the somewhat new technology of the device being used.

The camera is attached to a piece of nylon netting that's then attached to fur on the seal's back, Lidgard explained.

The idea, he said, was to deploy the camera four or five times, each time removing it from the seal to get the data after a few days and reattaching it to continue the research.

In this case, Lidgard said he thinks the seal was starting to go through the moulting process and was foraging for food when the camera fell from its back.

But in June, a fishing crew found the device in Banquereau Bank and contacted the Australian company that makes the device, Customized Animal Tracking Solutions.

The firm reached out to Lidgard to confirm the camera was his and to connect him with the fishers.

"I was bewildered at first and totally surprised," he said of news the camera had been found and was intact. After finally getting his hands back on the device, he sent it to Australia to have the data carefully extracted.

"There's a full record of observational data on the camera. I think (there are) 59 20-minute videos," he said, as well as dive depth data and acceleration data, among other metrics.

The camera is now on its way back from Australia and will be deployed on a female seal next month. This time, Lidgard said, the seal will be one that researchers are familiar with and is likely to make frequent trips back to the island.

Lidgard said while it was a longer experiment than expect, he calls it a success.

He said with the camera soon going back into use, he's been inspired to keep researching the mysterious animals.

"It's very risky, right? I mean, you put this camera on a seal and then you just really hope that the seal comes back and that you've got footage," he said. "So when something like this happens, I guess it's encouraging and it does encourage you to keep going."

This report by The Canadian Press was first published Oct. 08, 2021.