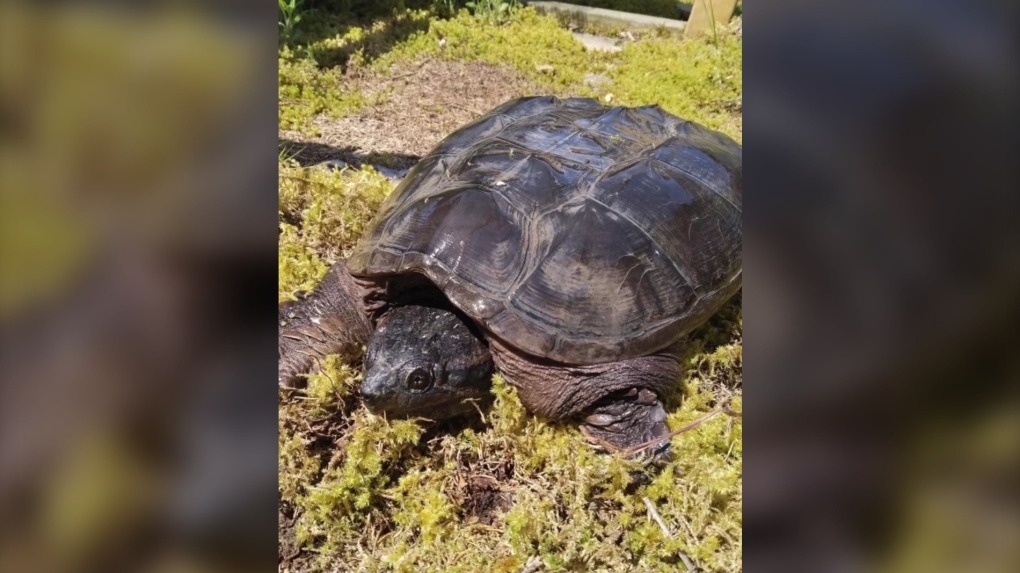 After being in the care of Hope for Wildlife for 245 days, Main Street Myrtle is set to head home to mark World Turtle Day.

Her name originates from her history of crossing Main Street in Dartmouth. Some may recognize her from when she first became famous after backing up a nearby Tim Hortons drive-thru.

Back in September 2021, the beloved snapping turtle was run over by a vehicle while attempting to cross the intersection of Main Street and Forest Hills Parkway in Dartmouth.

As a result, she suffered fractures to her shell and healed at the facility.

However, Myrtle's strength through her injuries didn't end there.

Upon reviewing her X-ray, staff at Hope for Wildlife learned the turtle swallowed an entire fish hook and leader. Luckily, she was able to digest the hook herself a few months later.

Her time spent at the facility happened to fall into a turtle's hibernation season, but because Myrtle needed to heal from her injuries, she was placed in a warm and humid room to keep her awake.

On Monday, which was World Turtle Day, Myrtle and staff members made their way to her home, Topsail Lake.

"If she's happy with the spot, she'll go into the water," said Clarence Stevens of Nova Scotia Turtle Patrol.

Main Street Myrtle swam into the water shortly after being placed nearby.

"She has made a full recovery and today was her release day to coincide with World Turtle Day," said Amy Honey of Hope for Wildlife.

Officials say they added gravel close to the area to prevent her from travelling towards the road when it's time to lay any eggs -- a reason why she has a record exploring the roads.

World Turtle Day was created as an annual observance to celebrate and protect the species, along with their global disappearing habitats.

Several people have been shot, two suspects have been arrested and police are searching for a possible third suspect after an attempted bank robbery in Saanich, B.C.

Cassidy Hutchinson, a key aide in Donald Trump's White House, told the House committee investigating the violent Jan. 6, 2021, insurrection on Tuesday that Trump was informed that people rallying on the mall that morning had weapons but he told officials to 'let my people in' and march to the Capitol.

John Horgan is expected to announce Tuesday afternoon that he will step down as premier of British Columbia, sources tell CTV News.

Ghislaine Maxwell, the jet-setting socialite who once consorted with royals, presidents and billionaires, was sentenced to 20 years in prison Tuesday for helping the wealthy financier Jeffrey Epstein sexually abuse underage girls.

A jury at a coroner's inquest into the deaths of three women murdered by their former partner is recommending that Ontario formally declare intimate partner violence an epidemic and establish an independent commission dedicated to eradicating it.

Adults over 50 who have had COVID-19 are more likely to experience a shingles outbreak, according to a study published in May.