Man reunites with wallet 39 years after losing it on N.S. beach 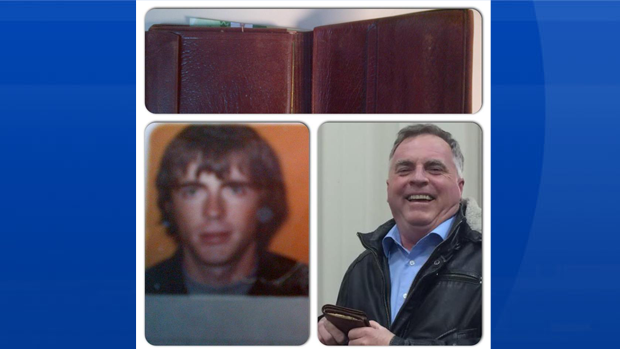 Harold Parker has been reunited with his wallet nearly 40 years after losing it on a Nova Scotia beach. (Nova Scotia RCMP)

A man has been reunited with his wallet almost 40 years after losing it on a Nova Scotia beach, thanks to the owner of an antique store and an investigation by an RCMP officer.

RCMP Cpl. Aaron Glode, who works at the detachment in Musquodoboit Harbour, N.S., stopped at an antique store in West Chezzetcook, N.S. in December.

Glode says he struck up a conversation with the owner, Dave Clark, during which time he mentioned that he had just transferred to Nova Scotia from Prince Edward Island.

“His eyes lit up and he asked me to do him a favour,” said Glode in a statement released Wednesday by the RCMP.

Clark then reached into a cupboard and handed Glode a brown leather wallet. He explained that he had found the wallet in the Lawrencetown Beach area in 1976 and that it had originally contained an ID card and a $20 bill.

Clark said he held on to the wallet for over 40 years in the hopes that he might find the owner someday. He then handed Glode a new $20 bill to replace the one that had once been inside the wallet.

“He looked at me and said this has always been on his mind and now that he was 76 years old he thought it was time to try and find the owner,” said Glode.

“I checked the wallet and found ID for a Harold Parker that included his date of birth and a P.E.I. address. There were also receipts dated February and May 1976 and a picture of a girl named Della.”

“I knew if I ever heard back from someone it was going to be an interesting conversation to let someone [know] I had their wallet and all its contents after losing it 39 years ago,” he said.

On Dec. 30, Glode’s phone rang and a man named Harold Parker was on the other end.

“Before I even got the chance to explain what it was that I had for him, Mr. Parker said, ‘you have my wallet.’”

Glode says Parker explained in detail what was inside the wallet and how he lost it in 1976. He said he was driving from Musquodoboit Harbour through Lawrencetown Beach when he saw someone stuck in the sand. Parker said he got out to help the person and his wallet, which had been tucked inside the breast pocket of his coveralls, fell out. He said he didn’t realize his wallet was missing until the next day, and when he returned to the beach, it was gone.

Glode says he met with Parker in Dartmouth on Jan. 28 and returned his wallet.

“He was ecstatic that the wallet was making its way back to him after 39 years,” said Glode. “Both he and Mr. Clark are happy the wallet is back where it belongs.”