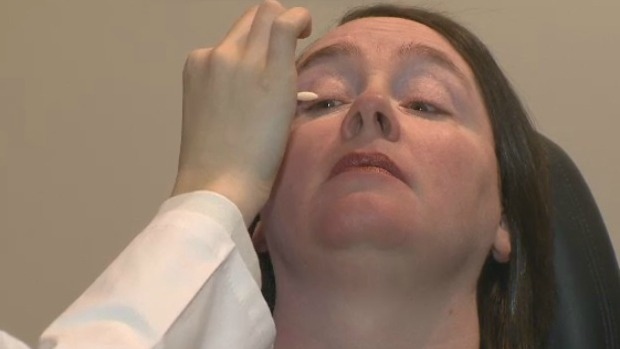 Dry-eye disease is any condition that affects the production of tears - the result is red, sore, dry, itchy, burning, tired, and even watery eyes.

Shelley Caffatos gets treatment for her dry eyes.

“They'd been feeling sticky when I wake up and they'd be sometimes stuck shut. I'd have to peel them open,” says Caffatos.

Leading up to her diagnosis, Caffatos says her eyes were very uncomfortable, and she was constantly rubbing them.

“I tried eye drops and it was a temporary fix. It didn't really work well, not for very long.”

Caffatos hopes that LipiFlow will be the long-term solution she is looking for.

“The LipiFlow applies heat to the inside of the eyelids to a temperature of 42 degrees Celsius, which is the temperature required to liquefy the oil in our glands,” says optometrist Dr. Erin Sheppard.

Dr. Sheppard says 86 per cent of individuals with dry eye have an oil gland issue.

“If they get overworked, which often happens with an oil deficient dry eye, they'll actually start to shorten, they'll truncate, and then they'll atrophy, and then they're gone and they won't come back,” says Sheppard.

A 12 minute LipiFlow treatment can help re-activate those overworked glands.

“After the oil has become completely liquefied, there's a very gentle pulsation technique which will evacuate those glands and get all the old junky oil out. Then that allows the glands to refill with fresh healthy oil,” says Sheppard.

Caffatos says the procedure felt a bit strange, but wasn't uncomfortable and was well-worth it.

“My eyes feel so much better. I don't remember the last time they felt this wet,” says Caffatos.

Dr. Sheppard says, while the immediate effects are noticeable, it takes about a month to feel a major improvement. Once the glands are cleared out, it takes about two to four weeks for them to refill. Over that time period, home-care is crucial.

“They have to keep their lids clean, we put them on omega threes, often we'll do hot compress therapy, sometimes we'll have to teach them how to blink better, because if you're not blinking appropriately, then the oil can't even come up out of those glands,” says Sheppard.

Dr. Sheppard says there is no quick fix for dry eye, especially complex cases, but response to the LipiFlow procedure has been positive.

“Really, at the end of the day, if we can get you through your day-to-day activities without constantly thinking about your eyes and how uncomfortable they are, then I think it's a success,” says Dr. Sheppard.

Dr. Sheppard says, on average, people go about 18 months between treatments. However, there are also patients who have one treatment and don’t need any more.