At Nova Scotia's fire protection headquarters, wildfire investigator Kara McCurdy goes through a large black container, showing some of the gear she took with her when she went to help battle wildfires in British Columbia earlier this month.

McCurdy is Nova Scotia's only female wildfire investigator and has been the only Nova Scotian sent to B.C. for firefighting efforts so far this fire season.

"It's challenging, you're packing on a whim, you're going to help in another province, it's extreme conditions, you don't know where you're going to be staying, living day-to-day," she says.

She departed for B.C. July 10 and returned this past Sunday.

"When I left here, I didn't know what I was going to be up against," recalls McCurdy. "I've never done this scale of an investigation outside of Nova Scotia."

But McCurdy has been in fire prevention and firefighting a long time, starting at the Department of Lands and Forestry when she was 16 years old. 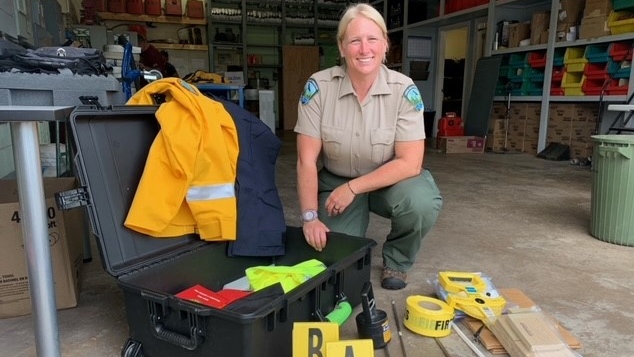 Wildfire investigator Kara McCurdy at the Nova Scotia Lands and Forestry Forestry Protection office in Shubenacadie, N.S., with some of the investigative gear she took with her to examine wildfires in British Columbia earlier this month. (CTV Atlantic / Heidi Petracek)

Wildfire investigator Kara McCurdy at the Nova Scotia Lands and Forestry Forestry Protection office in Shubenacadie, N.S. with some of the investigative gear she took with her to examine wildfires in British Columbia earlier this month. (CTV Atlantic / Heidi Petracek)

McCurdy's first assignment upon arriving in B.C. was to assist investigators for a day in Lytton, the village destroyed by wildfires at the beginning of the month.

The scene is something she'll never forget.

"It was scary," she remembers, "you drove through town, there was a lot of burnt vehicles along the way. (Then) we rerouted around the backside to where the fire center was, and then we headed down to where the origin was."

"The fire had gone up over the mountain, and today it's still 42,000 hectares, it's still burning."

After working in Lytton, McCurdy moved to other wildfire scenes throughout the area, including Penticton.

"Just the walking up and down mountainous terrain, in 35 plus degree heat," she says, "and then having to get there and then really wrack your brain as to, 'how did this happen?'"

Answering that question, means tracking a fire's path, looking at burn patterns, and gathering evidence.
"There's a lot of photographing, GPS, documenting, (and) measurements," she explains.

But finding the exact cause of a wildfire, she adds, can be difficult, when the scene is burned beyond recognition and firefighting efforts obliterates whatever is left.

New Brunswick has also been sending resources out West, with 47 fire fighters departing for B.C. July 5, and another group that left Wednesday.

New Brunswick Natural Resources fire equipment coordinator Matt Ruff was among the first group that headed West at the start of the month and recalls what it was like entering what was left of Lytton.

"It was a lot of devastation," he remembers. "You're driving in there's telephone poles half burned off, there's cars burned along the road." 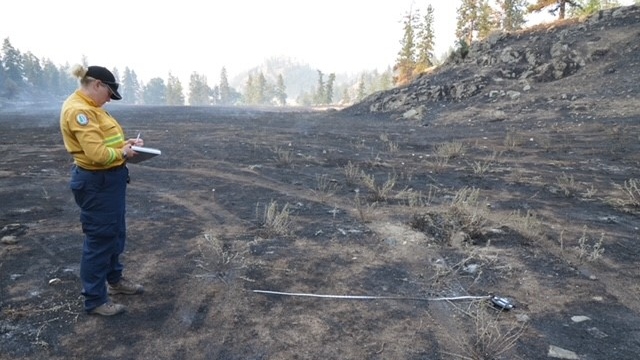 The 32-year veteran of the Department says the hardest part was seeing basements where there were once homes.

"That's really strikes home," he says, "because nobody wants to see that, nobody wants a fire to get into a town where people's homes are threatened."

"But you have to put that aside," he says, "and work at the task at hand."

That task for Ruff and the rest of the crew was to protect what remained in the community from any further fire damage, using techniques very different from what New Brunswick crews normally utilize.

"Our crews learned a lot from the B.C. crews," he says, "here in New Brunswick we mainly fight fire with pumps and hose, but in B.C. they actually fought a lot of fire with hand tools, shovels and pulaskis."

"The fire was very close to homes, in one instance it was within a hundred meters of homes, and our guys had a hose line, right there," Ruff says.

For both Ruff and McCurdy being on the frontlines of active wildfires is about making a difference.

"You're protecting homes, so you're really getting a sense of accomplishment," says Ruff. "It's a rewarding job to help fight fires."

McCurdy says the gratitude she received while on the job out West, and the experience gained, made the hard work worthwhile.

"It was nice to be able to be there and help them out," she says.

"So many thank yous as you went by people," she adds, "it's hard, but it's rewarding."

A series of studies led by Dutch researchers have found that avoiding the news during the pandemic was correlated with better mental well-being.

A small, angular rock that one Canadian physicist says looks like a chunk of black cheese has the potential to help scientists understand how the early solar system formed.

A NASA spacecraft named Lucy rocketed into the sky with diamonds Saturday on a 12-year quest to explore eight asteroids.