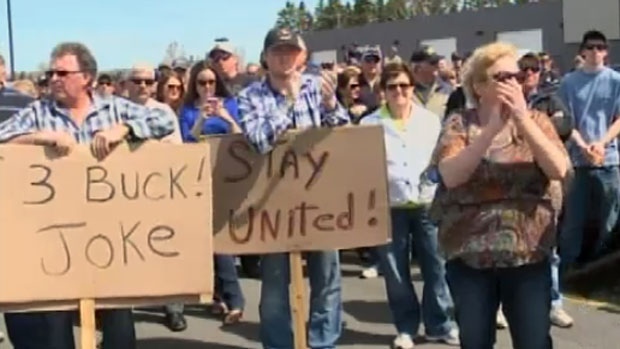 Roughly 1,000 fishermen and their supporters gathered in front of the Department of Fisheries and Ocean building in Charlottetown to protest low lobster prices. (CTV Atlantic)

Lobster fishermen in Prince Edward Island rallied in Charlottetown on Friday in one of the island’s largest gatherings of fishermen in the province’s history.

Roughly 1,000 fishermen and their supporters gathered in front of the Department of Fisheries and Ocean building to protest low lobster prices.

Their fishing boats have been sitting idle since Wednesday.

“All the boats are shut down in P.E.I. There is a quite a few in the mainland. The whole south shore on the other side are all shut down,” says Michael McGeoghegan, president of the P.E.I. Fishermen’s Association.

“New Brunswick guys, there’s over 200 of them tied up. Nova Scotia guys are starting to tie up.”

More than 250 fishermen from the Nova Scotia side of the Northumberland Strait held their own protest at the wharf in Caribou, N.S. They also tied up their boats.

Like the fishermen on the island, they say they want a minimum of $5 a pound for their catch.

“If somebody came and told you they were taking two or three dollars off your wages an hour, would you be happy?” says Ronnie Heighton, president of the Northumberland Fishermen’s Association. “That’s the same thing as reaching into our pocket.”

Mother’s Day is typically a busy time for lobster sales in the Maritimes and fishermen are hoping to pressure buyers into giving them a fair price.

Fishermen officials, buyers and lobster processors met in Charlottetown on Friday to discuss the issue.