Mass killing: Nova Scotia has been through hard times before, but not like this 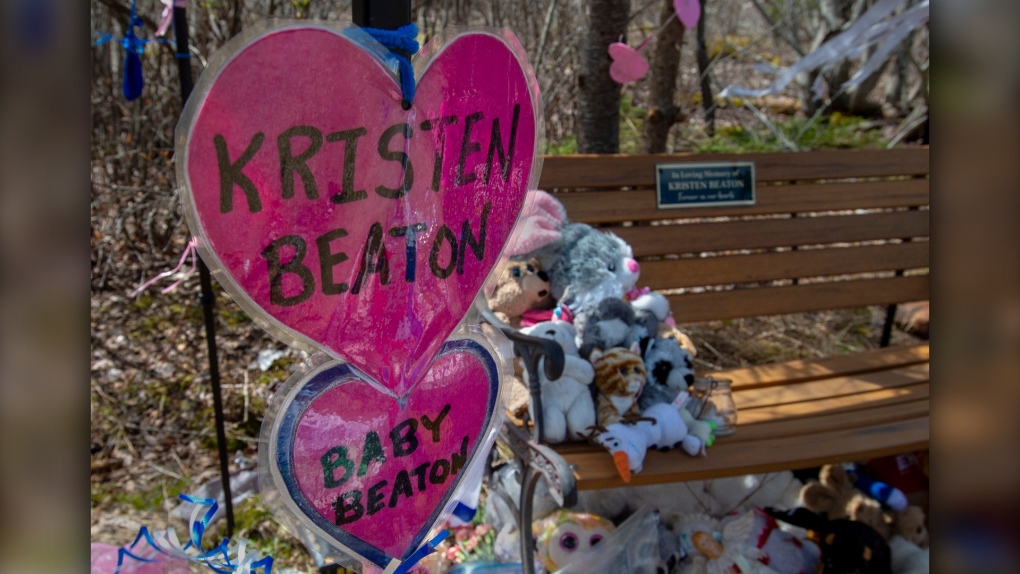 A shrine to Kristen Beaton and her unborn child is seen in Debert, N.S. on Thursday, May 14, 2020. It was one month ago that 22 people were killed after a man went on a murder rampage in Portapique and several other Nova Scotia communities. THE CANADIAN PRESS/Andrew Vaughan

DEBERT, N.S. -- On days when he's feeling up to it, Nick Beaton heads to a rural road just outside of Debert, N.S., where a makeshift memorial pays tribute to his late wife and unborn child.

It's been almost a month since Kristen Beaton was killed by a gunman who took the lives of 21 other people during a frenzy of violence across northern and central Nova Scotia.

The continuing-care assistant was on her way to work with the Victorian Order of Nurses on April 19, when the killer -- disguised as a Mountie and driving a replica RCMP cruiser -- pulled over her car and shot her for no apparent reason.

On a lonely gravel turnoff on Plains Road, her roadside shrine includes bouquets, photos, cards, candles and a wooden bench under a small canopy, where Nick Beaton can sometimes be found sitting amid scores of stuffed animals.

"I call it Kristen's site -- it's where it happened," he said in an interview. "I don't go there every day, as I believe she's in my heart and she's in my home, too."

Not far from the bench is a two-metre tall letter K, and nestled among some Nova Scotia flags and potted pansies is a small rock covered with painted roses and the words, "Kristen & Baby."

The humble site is one of several similarly appointed memorials along the twisting, tree-lined roads in Colchester and Cumberland counties -- improvised but sacred spots that speak to a province in mourning.

A short drive south on Plains Road is a memorial for another victim: Beaton's VON colleague, Heather O'Brien. Her family has planted a small flower garden there, and there's also another bench and canopy.

Nick Beaton says there will be a funeral for Kristen and "baby Beaton," but that will have to wait until the COVID-19 pandemic has subsided.

Until then, those seeking solace from their grief will have to do so behind closed doors -- or choose one of these very public venues.

In the tiny village of Portapique, N.S., where the gunman began killing neighbours on the night of April 18, there are two roadside memorials: one at the head of Portapique Beach Road -- not far from where 13 people died -- and another along Highway 2 at a former church.

Cees van den Hoek, the building's owner, says he placed four lattice panels in front of the former church shortly after the slayings when it became clear some people were uncomfortable going anywhere near the initial crime scene.

As well, he called on people from across Canada to send him cards, letters and other personal tributes. The panels are now full of flowers, posters, paper hearts and many messages that he has laminated.

"We had quite a few cards from Humboldt," said van den Hoek, referring to the 2018 bus crash north of the Saskatchewan town that killed 16 people, most of them members of the Humboldt Broncos junior hockey team.

"We're kind of in the same boat," says van den Hoek, who knew some of the victims of the Portapique mass killing. "That was really touching. Some of the letters, when your read them, it's really quite emotional."

There's been talk about setting up a foundation with funds that have been raised for the affected families, but van den Hoek says plans for a permanent memorial are in the early stages.

"We're trying to get some light after the dark," he says. "We don't want to be just a morbid tourist destination."

Still, Nova Scotians find themselves in a surreal state of mind these days, given that the pandemic has thwarted the traditional grieving process. That includes handshakes and hugging.

As well, there have been additional tragedies to deal with.

The April 29 crash of a Canadian Forces helicopter in the Mediterranean Sea claimed the lives of six military members -- all of them based in the Halifax area. Then on May 6, the province learned of the disappearance of a three-year-old boy from Truro, N.S., who was walking near a brook with his grandmother.

On Sunday, another tragedy hit home as Capt. Jenn Casey, a Halifax native and a public affairs officer with the Canadian Armed Forces, was killed in a Snowbird jet crash in Kamloops, B.C.

"It's so piled up," says van den Hoek, referring to the province's collective heartache. "There was the first wave, and then the next wave and the next .... People are still reeling from the first one."

Portapique resident Nancy Hudson lives just down the road from the community hall, where grief counsellors are ready to help those in need.

"That's where people go to talk about things," she says.

"I've lost friends, but I haven't lost children or relatives. But it still hurts .... I can't imagine how some of them are dealing with this right now, especially when you can't come together and have a funeral."

Bill Casey, the well-known former member of Parliament for the area, says the brutality of last month's rampage has stunned the province in a way that is hard to comprehend.

"We're so unused to it," Casey said from his home in Brookdale, N.S. "It's just not part of our culture ... to have anything like this happen."

A day after the killer's cruel mission was ended by a fatal shot from an RCMP officer, Nova Scotia Premier Stephen McNeil said the "innocence of the province cannot be let go of."

"We cannot allow a tragedy as deep and as painful and as hard as 1/8this 3/8 determine what our communities are going to be like."

However, Casey said it's important to remember the province is no stranger to big-scale tragedies. For centuries, Nova Scotia has suffered through shipwrecks, major fires, coal-mining calamities and natural disasters.

According to the Nova Scotia Archives, more than 2,500 men have died in Nova Scotia mining accidents since the mid-1800s, many of them in the coal seams of Cumberland County.

The reality of living on the East Coast has long meant struggling to survive and relying on others to get by.

"We are not without our history of loss," says Casey. "But, just in the last month, it has been incredible how the losses have added up."

This report by The Canadian Press was first published May 18, 2020.

With files from Michael Tutton.