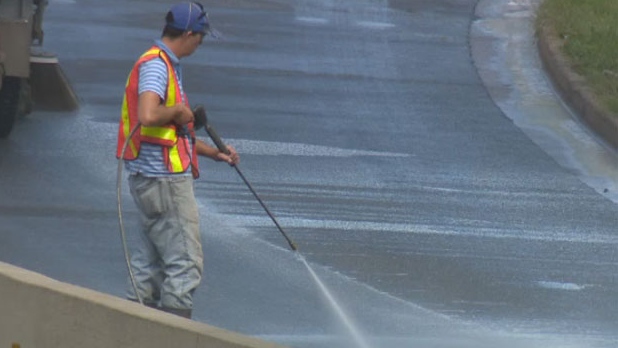 An industrial cleaner attempts to clean up the mess of white paint that spilled in Halifax Friday morning.

Removing paint can be a pain, but just imagine cleaning up more than 100 litres of it.

The Halifax Harbour Bridge Commission was faced with that very task this morning when several industrial-sized buckets of white paint fell off the back of a pickup truck on the Halifax side of the MacKay Bridge.

The incident occurred around 7 a.m. Friday.

“Our staff arrived on site within seven minutes and within ten minutes we realized what we were dealing with and closed the ramp down,” says Steve Snider of the Halifax-Dartmouth Bridge Commission.

Within minutes of the spill, it was a whitewash spanning nearly 400 feet.

More than 100 litres of the paint covered the street and industrial cleaners were called in to sop up the mess and keep the latex pain clear of storm drains.

The cost is expected to be covered by the driver’s insurance.

Motorists, including several Metro Transit buses, were re-routed from the Barrington Street ramp to the Robie and Windsor Street ramp.

“We had two routes that were impacted this morning,” says city spokesperson Tiffany Chase. “One was detoured and wasn’t impacted at all, and the other had to take a slightly different route.”

Other vehicles weren’t as lucky. An estimated 400 cars drove through the puddle of paint Friday morning.

Drivers concerned about paint splashed on their cars should contact the Bridge Commission.

“The paint was white and I saw that nice black BMW convertible drive through it and I expect he’ll be calling somebody,” says Snider.

He also says vehicles dropping goods on the bridges is an all-too-common occurrence, and drivers need to be more diligent about securing those loads.

“Safety doesn’t just happen. You have to make for safe conditions,” says Snider. “People need to take responsibility for how they drive and what they’re carrying.”

Cleanup of the spill was completed Friday afternoon.