It was an emotional reunion in Edmonton, Alta., Tuesday when a Calgary woman came face-to-face with the co-worker who donated part of his liver to save her life.

“It’s been one month since I’ve seen this face,” said Karla Frisko in a Facebook post, which included photos of her hugging Scott Watson, and a side-by-side picture of their surgical scars.

“To say I’m grateful is an understatement. We have matching scars to forever remind us of the bond we now share,” wrote Frisko, who is the sister of CTV Atlantic anchor and reporter Bruce Frisko.

“Recovery has not been easy for either of us, but it was hard not to smile/tear up when he walked into the room.”

Thousands have been following their story for more than a month.

Diagnosed with primary sclerosing cholangitis -- a rare condition that causes a narrowing of the bile ducts -- 46-year-old Frisko was told a liver transplant was the only remedy.

She had been on the list since July 2021, but was ineligible for an organ from a deceased donor because her case wasn’t considered enough of a priority.

Friends and family were screened under Alberta’s Living Liver Donation Program, but most were ruled out.

Disheartened, Frisko mentioned the situation during a work call that included Watson, a relatively new employee at Sun Life Financial, where they are both employed.

The conversation changed both of their lives.

"Karla just made a huge impression on me when she told me her story," Watson told CTV News Calgary on April 29.

"I had this overwhelming feeling when we were talking that I should go and get tested.” 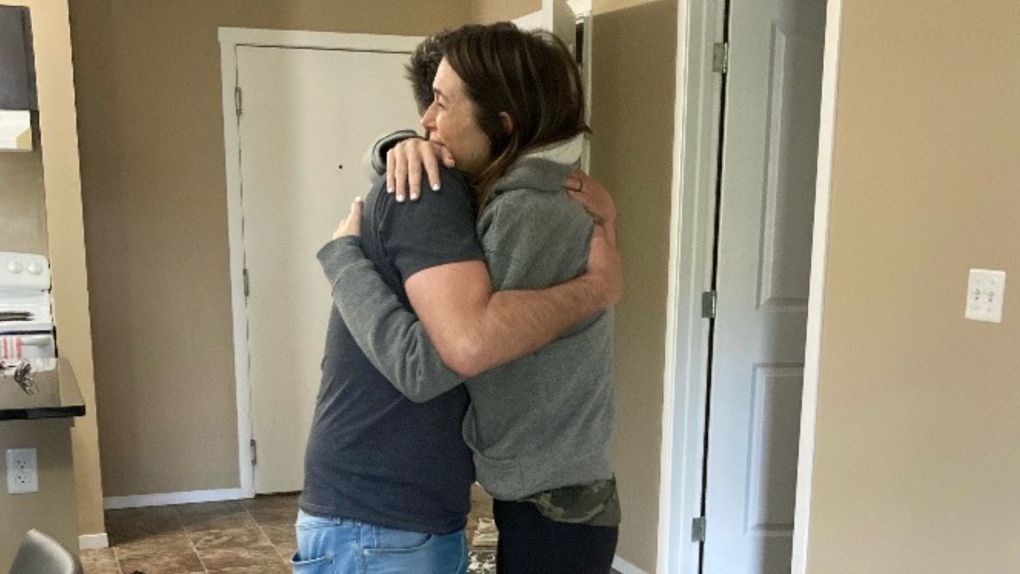 Karla Frisko and Scott Watson embrace as they meet face-to-face for the first time since the procedure. (Submitted: Della Tarr)

Karla Frisko and Scott Watson embrace as they meet face-to-face for the first time since the procedure. (Submitted: Della Tarr)

Watson was a match and the combined 18-hour surgeries were performed on May 2.

The 40-year-old Watson, who grew up in Halifax, has been posting about his journey on Instagram.

“Seeing Karla today was like seeing a long-lost friend for the first time in years,” he told CTV News Wednesday via text, adding that he remains sore and is frequently tired.

He was cleared to go home to Calgary on May 14.

Frisko remains in Edmonton, where surgeons and specialists continue to monitor her recovery and manage complications.

Watson said the reunion was another memorable aspect to their story.

“The emotions were overwhelming, but the connection we have now is undeniable.”