CTV News has learned new details about the life of Darren Muise, who was convicted in the murders of three people at a McDonald’s restaurant in Cape Breton almost 25 years ago.

Four restaurant employees were shot in the head during the robbery.

Three people were murdered and one woman was left permanently disabled when three men robbed this McDonald's restaurant in Sydney River, N.S. in May 1992. The restaurant has since been torn down.

Court heard Neil Burroughs, 29, had been shot twice, stabbed and beaten with a shovel, but the married father of one was still alive when Muise, who had been armed with two knives, cut his throat.

Muise pleaded guilty to robbery and second-degree murder, and was sentenced to life in prison with no chance of parole for 20 years.

Muise was granted full parole in November 2012 and released on a number of conditions.

“We're madder than ever now,” said Burroughs. “Now I know they're out there, some of them are living the good life. So yeah, I'm pissed.”

Parole Board of Canada documents indicate Muise had been living in Quebec after he was released from prison, but moved to the lower mainland area of British Columbia in November 2015 to help his common-law spouse care for her elderly father.

According to the documents, Muise and his partner live in her father’s home and visit him almost daily at the care facility where he lives. They say Muise is living a “stable and financially secure life” and doesn’t have to work.

They say his partner is financially secure, is comfortable with the fact that he does not have to work, and that Muise has said his job is to support her.

However, the documents also acknowledge the “extreme irony” that Muise seems to be living a “good life” while his victims remain “forever irreparably damaged” by his crimes.

“I wish I had a violin for you,” said Burroughs. “That doesn't surprise me because every time we go there they say we're the victims and we’re treated worse than they will ever be treated.”

There has also been a change to one of his parole conditions. Muise had been ordered to avoid meeting people with a criminal background, but he has been contact with a man he met while in prison in Quebec.

The documents state the man, who is on parole and serving a life sentence, also lives in the lower mainland area of British Columbia and has “demonstrated stability in the community during his parole.”

Once they realized the error, Muise was directed to have no contact with KB until the Parole Board of Canada could amend the wording of the condition. The documents state that Muise’s case management team believes he should avoid anyone who has an active criminal record, but that associating with a person who has a historical criminal record should be allowed, as long as that person is “involved in pro-social activities.”

The wording of the condition has been changed so that Muise must instead avoid associating with anyone he knows or has reason to believe is involved in criminal activity.

Burroughs says she found out about the change through our newscast and not officials.

“We are to be notified first. I was livid. I was not a happy camper.”

Burroughs is clear about what she feels should happen to Muise.

Derek Wood and Freeman MacNeil remain behind bars for their involvement in the murders.

Wood was convicted of a number of charges, including two counts of first-degree murder, and sentenced to life in prison with no eligibility for parole for 25 years.

MacNeil was convicted of first-degree murder and is also serving a life sentence with no eligibility for parole for 25 years.

Burroughs says she won’t rest until her family receives the justice they deserve.

“I think of Neil every day,” she said. “But when you go to the mailbox and get letters stating they're going in and they're up for parole, it's just so disheartening and a slap in the face to those four kids.”

Darren Muise's Parole Board of Canada documents are shown below: 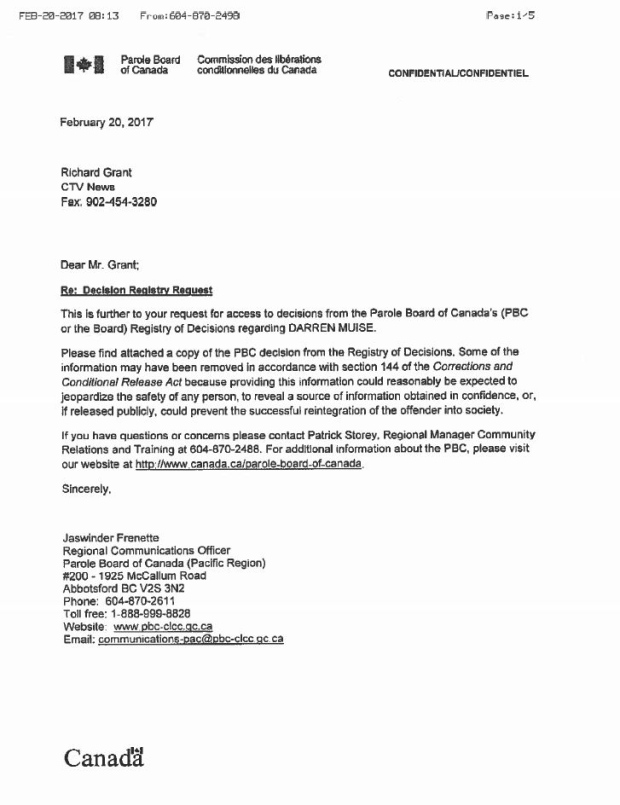 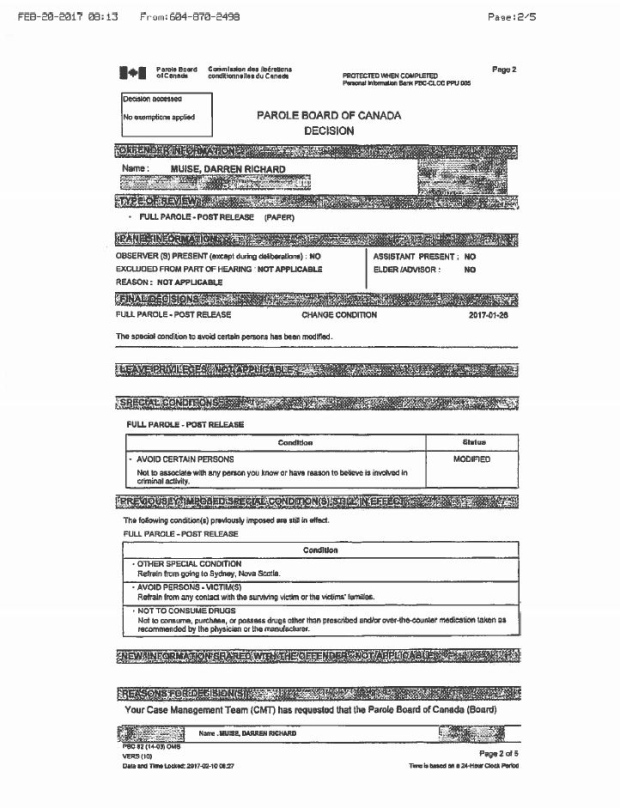 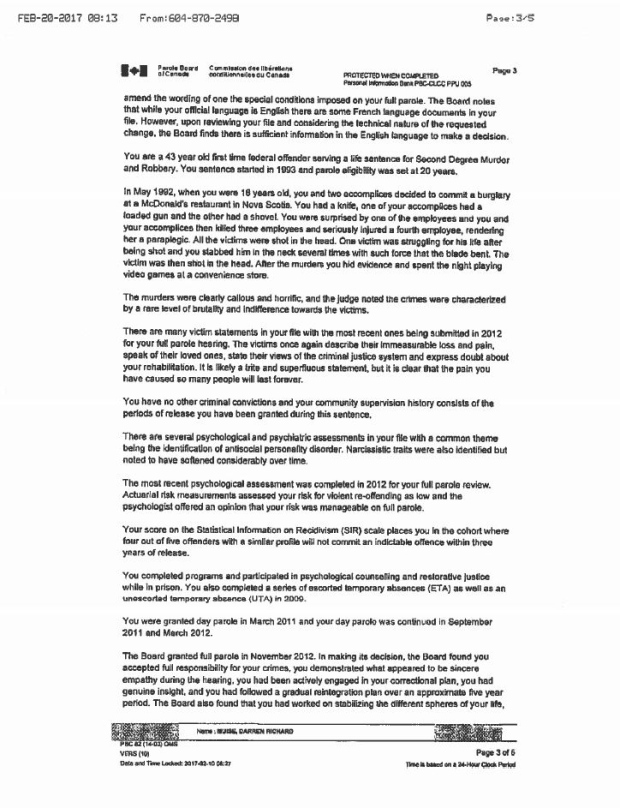 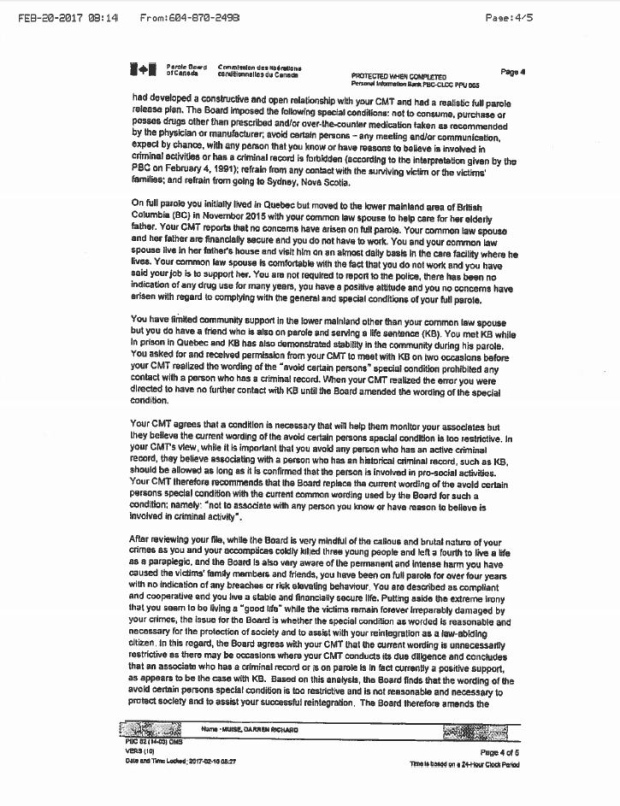 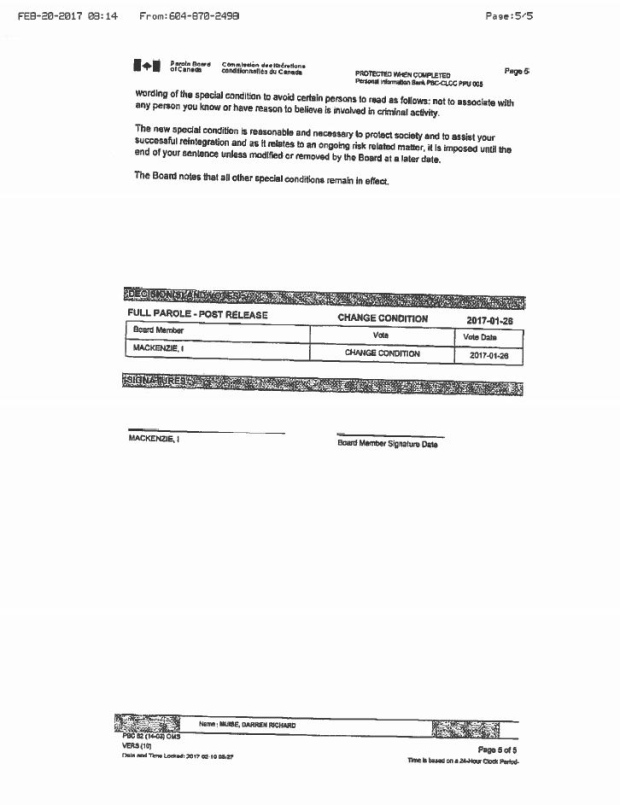