KEJIMKUJIK NATIONAL PARK, N.S. -- For thousands of years, birch-bark canoes were a vital part of Mi'kmaw life, but these days, it's a dying art -- one that Todd Labrador refuses to let go of.

The Mi'kmaw craftsman has kept the tradition alive in front of appreciative audiences at Kejimkujik National Park.

Labrador started working there in 1982 and was training to be a carpenter.

"I kept thinking 'I want to do Mi'kmaw cultural things,'" Labrador said. "I kept saying 'let's build a canoe' and in the first few years I was here, that wasn't something that they wanted to do. They had never seen me build a canoe, and I had never built a canoe -- so I can understand why."

But year after year of people saying "no" didn't discourage Labrador.

"It made me more determined," Labrador says.

Ashley Moffatt is a Parks Canada staffer at Kejimkujik National Park. She recalls a conversation she had with Labrador in 2014 during which he mentioned his idea of building a birch-bark canoe.

"I was like, 'alright, let's do it,'" Moffatt said. "I didn't know how we were gonna do it, and it was pretty makeshift the first couple years, but we made it happen."

Labrador says building a birch-bark canoe would take a couple of weeks if he focused only on the building part, but there's a lot of talking, too – and teaching.

As Labrador's helper Rosie Meuse says, it's not just building a canoe. 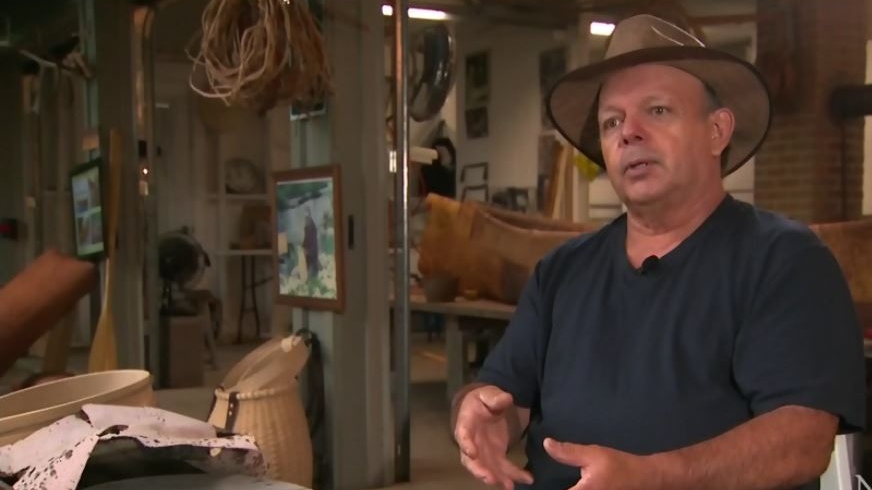 "It's bringing back the stories," Labrador said. "We believe that elders are people who have been here many, many times. That's where the wisdom comes from. When an elder comes here, everything stops; that's like a walking book of knowledge just walked in, and so, we're so thankful to have that."

Moffatt said the national park and its visitors are fortunate to have someone like Labrador doing what he does – in the way that he does it.

"What I find so special about Todd is, he's not the type of artist or craftsman that likes to work alone in a shop, doors closed," Moffatt says. "He wants to work -- and share his craft."

Labrador says he wouldn't have it any other way, though.

"When I was in my shop in the back of the house, with nobody to come visit, there wouldn't be any fun for me," Labrador says. "Being here, we meet people from all over the world, and they share their stories and we share ours. We work a little bit every now and then, and we build a canoe. But you know, canoe building is so much more than just canoe building, it's community building."