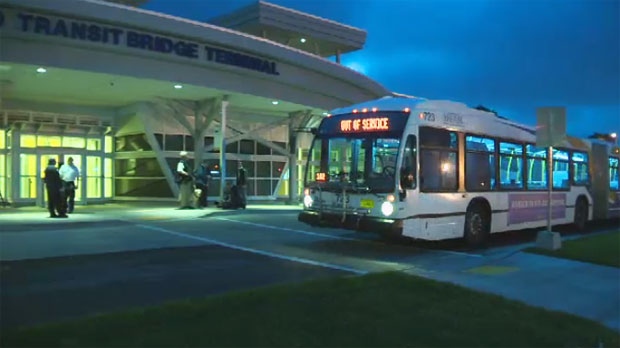 HALIFAX -- A bus mechanic married to an African Nova Scotian woman was subjected to a poisonous work environment riddled with unchecked racial discrimination and harassment, according to a provincial Human Rights Commission board of inquiry.

A decision released Tuesday said management at the Halifax Transit maintenance yard allowed a bully who made racist statements to run rampant in the workplace.

The allegations included a message scrawled on the men's bathroom wall, which said "all minorities not welcome; show you care, burn a cross." It was signed by "a member of the Baby Hitler."

In another instance, the bus mechanic and his wife arrived at a social event where the bully allegedly said in a loud voice "we don't want those kind of people here."

The bully is also quoted as saying "Racism, racism should be a law that you can shoot somebody and get away with it."

Said independent board chairwoman Lynn Connors: "HRM was liable for the actions of its employees and did not do enough to curb their inappropriate behaviour."

Connors dismissed the defence, saying "the case before me does not have anything to do with freedom of speech."

The complaint was lodged in 2006 by the bus mechanic, who is apparently white but is not identified in the 78-page ruling.

He claimed he was discriminated against because of his marriage to an African Nova Scotian woman with Aboriginal band status and his support for Indigenous and African-Canadian co-workers.

Connors found "ample evidence" that both the complainant and his Indigenous and African-Canadian co-workers were persecuted by a racist bully and his entourage.

The complainant also testified that the bully later tried to run him down with a bus, threw wet paper towels over a bathroom cubicle at him, and tossed a lug nut at him.

Although the ringleader of the racial discrimination was fired, he was reinstated after filing a grievance.

The decision also detailed derogatory and rude comments directed towards an Inuit mechanic and a African Nova Scotian mechanic.

The lead perpetrator of the harassment would refer to the black mechanic as "boy," for example.

"I find that he was discriminated against and harassed in the workplace by a number of individuals, most particularly, Arthur Maddox, who by his own admission ... told him to 'suck me boy,"' Connors said in her decision.

"Arthur Maddox was able to act in a disrespectful, aggressive and racist way," she said. "There are many examples of instances where actions were taken of a discriminatory nature, which provide direct evidence of a poisoned work environment."

"While our organization has taken concrete steps to build a culture of diversity and inclusion, we have more to do," he said.