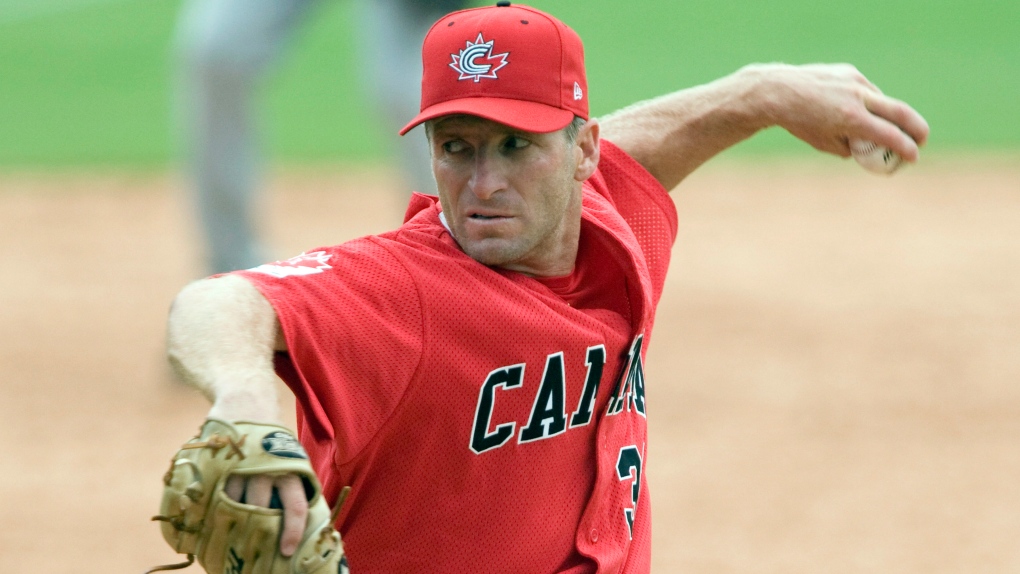 In this Aug. 13, 2008, file photo, Team Canada's Rheal Cormier pitches during the team's win over China in preliminary action at the Beijing Olympics in Beijing, China. Cormier, the durable left-hander who spent 16 seasons in the majors and remarkably pitched in the Olympics before and after his time in the big leagues, has died. He was 53. (Adrian Wyld/The Canadian Press)

PHILADELPHIA -- Rheal Cormier, the durable left-hander who spent 16 seasons in the majors and remarkably pitched in the Olympics before and after his time in the big leagues, died Monday. He was 53.

The Philadelphia Phillies said Cormier died of cancer at his home in New Brunswick.

Cormier owned a neat nook in Phillies history: He was the winning pitcher in the final game that Philadelphia won at Veterans Stadium in 2003, and also was the winner in the first game the Phils won after moving into Citizens Bank Park in 2004.

Overall, he was 71-64 with two saves and a 4.03 ERA with St. Louis, Boston, Montreal, Philadelphia and Cincinnati. Born in Moncton and raised near Shediac, N.B., Cormier was a member of the Canadian Baseball Hall of Fame. Cormier pitched 683 games -- the second-highest total for a Canadian pitcher. Only Paul Quantrill (841) pitched more in the majors.

Cormier made other prominent appearances on the mound, too.

Three years before his big league debut, he pitched for Canada in the 1988 Seoul Olympics. Then in 2008, at age 41 and a year after his final game in the majors, he again threw for Canada in the 2008 Beijing Games -- he tuned up for the event by tossing in a men's senior league.

"Rheal was one of the most vibrant people I've had the pleasure of knowing," former teammate and Hall of Famer Jim Thome said in a statement released by the Phillies. "He loved baseball, but he always put his family first."

"Frenchy was the kind of guy who would do anything for you and I'm lucky to have called him my friend for many years. Our time spent together in Philadelphia as teammates was unforgettable. He will be greatly missed but never forgotten," Thome said.

Cormier went 8-0 with a 1.70 ERA in 65 games for the Phillies in 2003. That was the final season in the majors for another Philadelphia lefty, longtime reliever Dan Plesac.

"One of my all time favourite teammates. Big heart, spent 2yrs sitting next to him in the Phillies bullpen," Plesac tweeted. "he made everyone he played with better ... keep throwing that 3-2 splitter in heaven."

In 2004, Cormier got into 84 games, a Phillies record for a left-handed pitcher.

Cormier debuted with the Cardinals in 1991 and was a starter early in his career. He pitched his only shutout in 1996 for the Expos, a three-hitter against St. Louis.

A lefty specialist in his later years, he finished with six games for Cincinnati in 2007, making his last appearance in the majors five days before his 40th birthday. He reached the post-season twice, both times with Boston.

The Phillies said Cormier became a U.S. citizen on Sept. 22, 2004, during a Philadelphia-Marlins series in Miami.

"I'm living the American dream and feel like I can give back, help the community and be a part of this country," Cormier said shortly before the ceremony.

The Phillies said Cormier was active with Phillies Charities Inc. during his six years with the club and was involved with teenage anti-drug and suicide prevention programs in Canada.

Cormier is survived by his wife, Lucienne, son Justin and daughter Morgan.