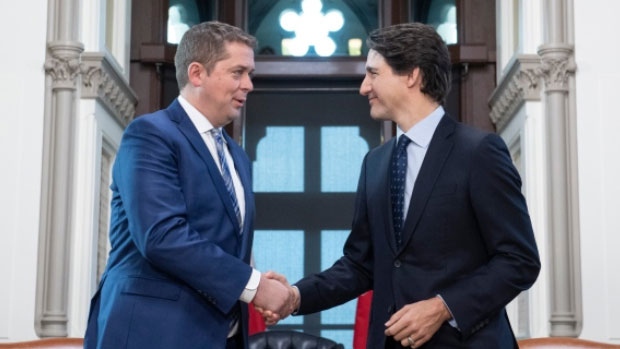 OTTAWA -- Prime Minister Justin Trudeau campaigned for re-election on a promise to support abortion rights, a stance that put his Conservative rival on the defensive, and now advocates are anxious to see the Liberals turn those words into action.

"It's good that we are getting the federal support at least in words, but words don't mean very much when it comes to people's lives," said Olivier Hebert, an LGBTQ advocate involved in efforts to save Clinic 554, a family practice in Fredericton at risk of closing without provincial funding. The clinic includes abortions among its services.

The clinic received national attention last month when Trudeau stressed he would remind New Brunswick Premier Blaine Higgs that his province has an obligation to fund out-of-hospital abortions, or risk having Ottawa enforce such requirements under the Canada Health Act.

The practice, which also serves the LGBTQ community, is up for sale due to financial difficulties stemming from the provincial government's refusal to expand its health-care funding to include surgical abortion procedures at private clinics, a stance held by both Higgs's Progressive Conservatives and the Liberals who governed before them.

"A Liberal government will always defend women's rights, including when challenged by conservative premiers," Trudeau said Oct. 15 in Fredericton.

The issue of abortion played a prominent role in the federal election campaign this fall.

Conservative Leader Andrew Scheer was pressed to clarify his stance abortion over several weeks, eventually confirming that he remains "personally pro-life" but would oppose any attempt to revive the issue in the House of Commons. The Liberals drew attention to the confusion throughout the campaign, especially as the Bloc Quebecois began to surge in Quebec, where anti-abortion views are unpopular.

Sarah Kennell, director of government relations for the advocacy group Action Canada for Sexual Health and Rights, said she would have liked to see Trudeau raise the issue in his one-on-one meetings with opposition leaders this past week, particularly with New Democrat Leader Jagmeet Singh.

Singh, who criticized Trudeau for being slow to push the issue, campaigned on a promise to enforce the Canada Health Act right away. One of the ways to do that could include holding back the funding that Ottawa transfers to New Brunswick to pay for its health-care system.

Kennell said she also wants to see the mandate letter for the new federal health minister include a clear commitment to resolve the issue quickly.

"It's imminent, the closure of the clinic, and that's why swift action is needed now," she said.

The issue did come up in Trudeau's meeting Friday with the Greens' Elizabeth May, though she was the one to raise it.

"It's abortion access that's about to be closed. We need desperate help from some level of, I think the federal government," she said in front of Trudeau before their formal session began.

"I was very pleased that there was common ground on acting to stave off the loss of abortion services in New Brunswick," she said afterward. "Clinic 554 is in danger of closing imminently and I am pleased that he also is concerned about that and wants to take steps within the Canada Health Act to ensure abortion access in New Brunswick. I'm not quite sure what he'll do with it in terms of the emergency of this particular clinic closing that provides services for abortion services as well as health care services for the LGBTQ+ community."

Ginette Petitpas Taylor, a New Brunswick MP who has been the health minister since 2017, sent a letter to her provincial counterparts in July warning them that making women pay out of pocket to terminate pregnancies, even at private clinics, went against the Canada Health Act.

The timeline for picking things up where she left them remains unclear.

Matthew Pascuzzo, a spokesman for Trudeau, said it is too early to comment on the content of the mandate letters or the speech from the throne.

He did leave the door open to the topic coming up when Trudeau sits down with Higgs.

"As the prime minister has said, we will ensure that the New Brunswick government allows paid-for access, to clinics that offer abortion services outside of hospitals," Pascuzzo said in an email. "The prime minister is eager to work together to keep making progress, and looks forward to meeting with all premiers one-on-one in the near future, including with Premier Higgs."

Higgs, whose office did not respond to a request for comment, accused Trudeau last month of playing politics with the issue of abortion services.

He also noted the provincial regulation limiting funding to abortions performed in hospitals had also been there under the previous Liberal government of Brian Gallant.

Abortion-rights advocates are not the only ones anxious to see how the Liberals will handle the issue.

Campaign Life Coalition has said that it welcomes the news that 46 Conservative candidates identified as being against abortion were elected in October.

At the same time, its November newsletter suggests the anti-abortion organization is worried the fact that the Liberals won a minority government means they will go even further to expand access to abortion services in Canada and elsewhere.

"We are concerned that Trudeau will co-operate with the NDP, Greens, and Bloc Quebecois to further liberalize euthanasia, the legal drug regime, and promote abortion throughout the land and abroad," said the newsletter from the organization, which did not respond to an interview request.

Meanwhile, Alberta is another province where abortion rights advocates could end up urging Trudeau to intervene.

United Conservative Party backbencher Dan Williams introduced a private member's bill in the Alberta legislature earlier this month that would reassert the Charter-protected freedom of conscience and religion for physicians and other health-care providers.

Williams has said his Bill 207 is a response to a decision from the Court of Appeal for Ontario this spring, which affirmed a lower-court ruling that found physicians who object on moral grounds to things like abortion or medically assisted death must offer to refer patients elsewhere.

He has also denied the charge from his Alberta NDP critics that his legislation, which would face an uphill battle without government support, is an indirect attempt to limit access to abortion services. Alberta Premier Jason Kenney has said he would not reopen the debate on abortion.

The Prime Minister's Office was asked whether the federal Liberal government has a position on the bill.

"Our government has been clear that women have a right to access reproductive services. We will use all options available to defend a woman's right to choose, including those that exist under the Canada Health Act," Pascuzzo said in an email.

This report by The Canadian Press was first published Nov. 16, 2019.