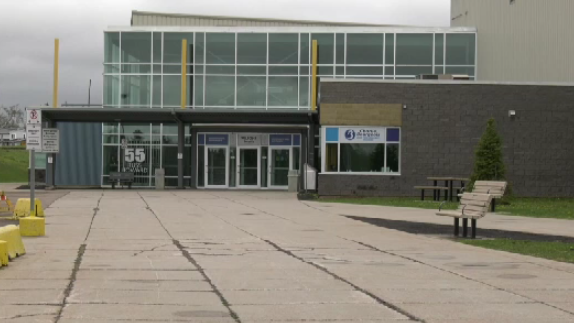 The Moncton venue where the alleged incident occurred. (Derek Haggett/CTV)

A hockey organization in Moncton, N.B., is investigating after an allegation of racism was reported to have occurred during a tournament in the city over the weekend.

The alleged incident involved an under-13 team outside the venue on Saturday, said the Atlantic Hockey Group in a statement to CTV News.

The team’s activities have been suspended for the final few weeks of the spring season, pending the completion of a full review.

The Atlantic Hockey Group says it does not condone racism or discrimination in any of its programs.

A spokesperson from the Moncton-based organization would not comment further on the nature of the allegation.

Canada will add 74 more people and businesses in Russia and Belarus to its sanctions list, Prime Minister Justin Trudeau announced on Monday as he met other G7 leaders in Germany to discuss the threat to global security posed by the invasion of Ukraine.

No 'warnings or second chances' for illegal activity on Canada Day: Ottawa mayor

Ottawa's mayor is warning the city won't tolerate any illegal activity downtown during Canada Day festivities this year, as the city prepares for possible protests.

Scores of civilians were feared killed or wounded in a Russian missile strike Monday on a crowded shopping mall in Ukraine's central city of Kremenchuk, Ukrainian officials said.

The moon has a new double crater after a rocket body collided with its surface on March 4.

A new subvariant of Omicron is expected to become the dominant strain of COVID-19 in Ontario, health officials say.

Several cars on an Amtrak train derailed in Mendon, Missouri, on Monday after hitting a dump truck at a crossing and there are early reports of injuries among the approximately 243 passengers on board, Amtrak said in a statement.