Boy fooled clerk with fake $50 bill made of paper with Chinese characters: police 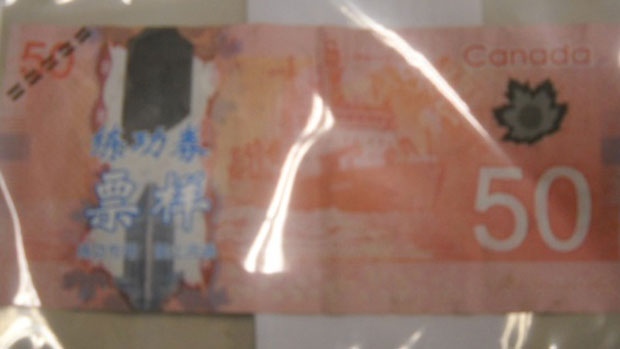 Police say a 15-year-old boy managed to fool a convenience store clerk with this fake $50 bill, which is made of paper and covered in Chinese characters. (RCMP)

LOWER SACKVILLE, N.S. - Police say a 15-year-old boy managed to fool a convenience store clerk with a fake $50 bill that was made of paper and covered in Chinese characters.

They say the boy asked the clerk for change at a store in the Halifax suburb of Lower Sackville last month.

The bill was red and similar to a legitimate $50 bill, but had notable differences including the Chinese writing.

RCMP tracked the boy down using video surveillance footage and the help of a witness.

They say the boy, who has since repaid the store, faces charges of fraud and possession of counterfeit currency.

A similar $50 bill with Chinese characters has been turned into the Lower Sackville RCMP detachment.

Police are warning the public to be wary of fake money.