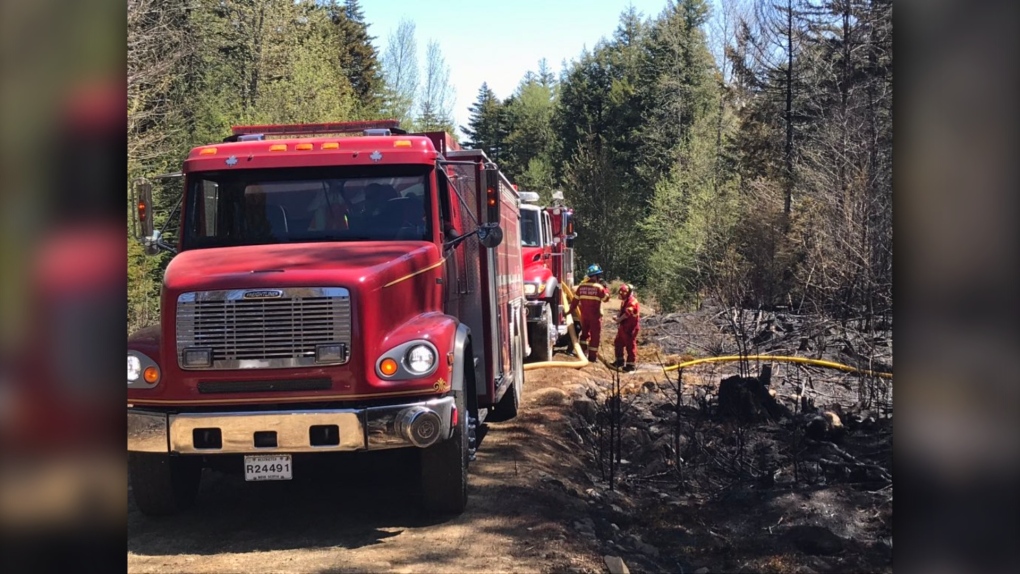 Twenty-two fire departments on scene of a large forest fire in Chester Grant, N.S. on Saturday May 23. (CTV Atlantic/Allan April)

CHESTER BASIN, N.S. -- Fire crews returned early Saturday morning to the site of a forest fire covering about 27 hectares of land near Chester Grant, N.S., patrolling for remaining hot spots from the blaze that broke out Friday afternoon.

Lands and Forestry said 14 fire departments, water supply tankers and department staff were on scene to contain the wildfire as of 10 a.m.

"Today... they don't have any open flame, and it's just hot spots to dig out and find and put out," Rudderham said by phone from Bridgewater, N.S.

The department was still asking people to avoid the area Saturday as work continued on site. The RCMP Nova Scotia Twitter account warned drivers that traffic was closed northbound on Highway 12 near Chester Grant at Exit 9 due to the fire.

The fire is believed to have started at about 4:30 p.m. on Friday, in a part of the province where the government has banned brush burning and beach fires.

The cause was still unknown Saturday.

Rudderham said conditions early in the day were ideal for suppressing the remains of the fire, with cooler temperatures, less heavy winds and higher humidity. He said the scene will likely be surveyed for a couple of days before the fire is considered 100 per cent out.

The department confirmed Saturday that two structures were damaged Friday.

Two provincial helicopters joined members from 16 fire departments Friday, with the department reporting that a "large part" of the fire was put out before crews left the scene at about 9 p.m.

A helicopter reported to the site Saturday morning, but was sent home after the scene was assessed.

On scene of a large forest fire in Chester Grant, N.S. An estimated 27 hectares. At least 22 fire departments are on scene. Fire broke out around 4:30 p.m. Friday and grew quickly. pic.twitter.com/aT2mQaDmof

This report by The Canadian Press was first published May 23, 2020.