HALIFAX -- The 82-year-old former Oxford Theatre on Quinpool Road in Halifax has been transformed into a modern rock climbing gym. After closing in 2017, Halifax’s last single-screen cinema is now welcoming crowds to the highest climbing walls in Atlantic Canada.

“The carpets arrived today so that’s the last step,” she said.

This past year has been a difficult climb for Turner.

“I’m very excited, the building has definitely given us our fair share of challenges.”

Construction crews dug down nine feet below the original floor to give the gym more height. They were also forced to update the building’s electrical, plumbing, heating and ventilation systems.

Turner says the main shape of the theatre and mezzanine is fairly consistent with the past structure.

“We did keep the original ceiling and we have some other fun little elements that will pop up that people will recognize.”

Former movie-goers will remember the neon sign in the lobby that reads “enjoy the magic of the movie.” 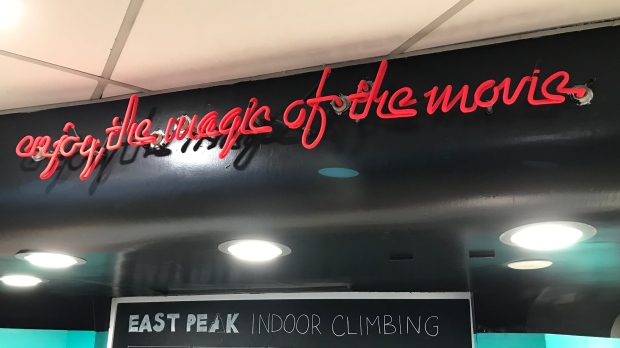 Turner and co-owner Dave Perozzo met in Colorado at a climbing wall conference. Turner lived in Saskatchewan at the time and wanted to return home to Halifax and set up a first-class gym. After a couple of visits and a lot of lobster, they formed East Peak Indoor Climbing.

With the opening deadline fast approaching, Turner’s family and friends have been putting in some long hours to prepare. Helping out is Perozzo’s son Daniel, who is a climber himself . He got a chance to try out the new climbing walls.

“So far it’s been great,” he said. “We have a head route setter, he’s done a fantastic job at setting up varying degrees of difficulties and styles of climbing. It was really, really enjoyable, really nice to finally get on the walls.”

The modern facility will hold competitions and will also host a national youth camp this summer. Beginners, experienced climbers and groups can purchase memberships or pay daily rates.

“It’s all still feeling very surreal,” Turner said. “But to be able to open a climbing gym in such an iconic building back in Halifax…It was always my dream to bring climbing to Halifax in a big way and I’m very happy.”