A section of Dartmouth's Burnside Industrial Park was shut down Friday after a fire in a scrapyard triggered alerts and air quality warnings.

Approximately 30 firefighters and 10 trucks were still on the scene as of 2 p.m. Friday.

Halifax Fire says it has since been put out, but power in the area is still limited.

Members will continue to do a fire-watch overnight.

Officials say air quality in the area has improved and monitoring for contaminated runoff will continue over the weekend.

Halifax Fire District Chief Pat Kline said a call came in for an outside fire at the scrapyard at Dartmouth Metals around 11:15 a.m.

Kline says the team also used a drone with a high-definition and thermal camera to identify the hottest parts of the fire.

“We’ll be hours,” said Kline Thursday afternoon. “The crews did a great job at their initial arrival to get it contained and keep it in the rubble pile and protect this exposure building behind us.” 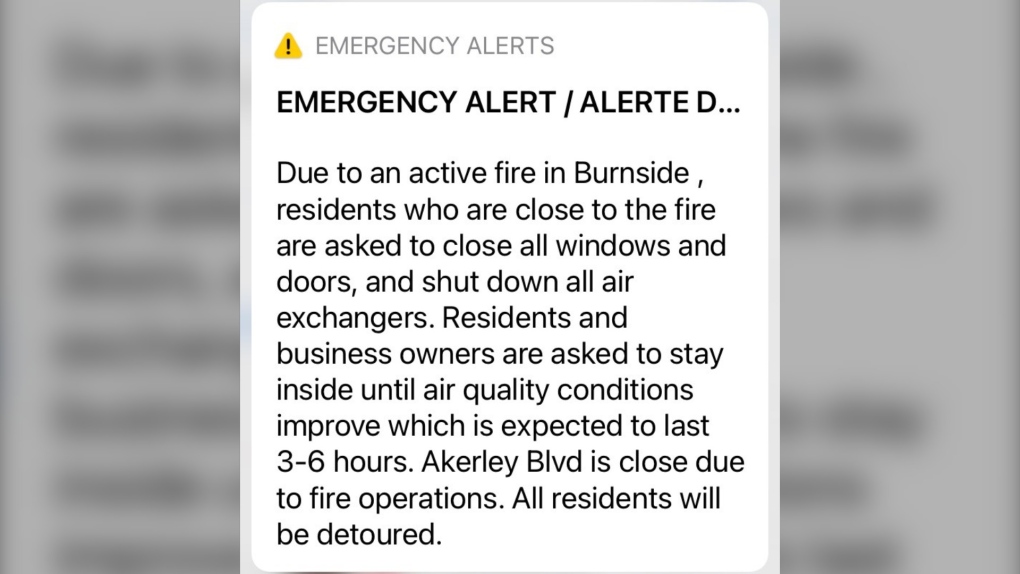 As a result of thick smoke, the emergency alert system was utilized around 1:20 p.m. to warn residents about air quality in the area.

The alert said residents and businesses close to the fire should shut all windows and doors, turn off air exchangers and stay inside until air quality improves, which was estimated to take roughly three to six hours.

Dartmouth Metals is a family-operated business that goes back to the 1960s.

Its owner David Giberson is on a fishing trip in New Brunswick, but has been getting updates all day from workers on site.

“I’m just in shock and awe that it happened because where it happened. It just happened in the middle of the steel pile,” said Giberson.

A large cloud of black smoke could be seen billowing from the yard from kilometres away.

“We have a salvage yard with motor vehicles that have been crushed and they still have rubber fuel remnants, batteries," said Kline.

However, Giberson said Dartmouth Metals doesn’t accept materials with tires or fluids. He said his team makes sure vehicles are decontaminated when they arrive.

“It’s possible a battery snuck through and caught the fabric on fire,” he said. “But I have no proof of that.”

“We’re going to do our due diligence and try to figure out the source and minimize the probability of it ever happening again,” said Giberson.

Kline said it’s unclear what started the fire, and according to police, the investigation is ongoing.

“It’ll be under investigation for a while and we may never find the cause, because of the fact it was a large pile of crushed cars,” said Kline.

Akerley Boulevard was closed to traffic between Mosher Drive and Windmill Road. Police asked drivers to use alternate routes to avoid delays.

Halifax Regional Police says no injuries have been reported as a result of the fire.

Giberson apologized for the problems the fire caused.

“This created such a nuisance for all of Burnside and the city,” he said. “It’s embarrassing. I’m going to make sure we do our best here at Dartmouth Metals to make sure something like this doesn’t happen again.”